The featured image above is captioned “Akin Place, S. Dart. Photo by Henry Willis of New Bedford,” donated to the Dartmouth Historical Commission by David Santos.  We believe it’s Henry P. Willis (1853-1927). Research in the works to determine approximate date this photo was taken.  Other than the 1905 photo by Fred Palmer, this is the earliest we’ve seen so far. Neighborhood undeveloped and mostly farmland. In 2018, the house exterior and footprint are virtually unchanged. 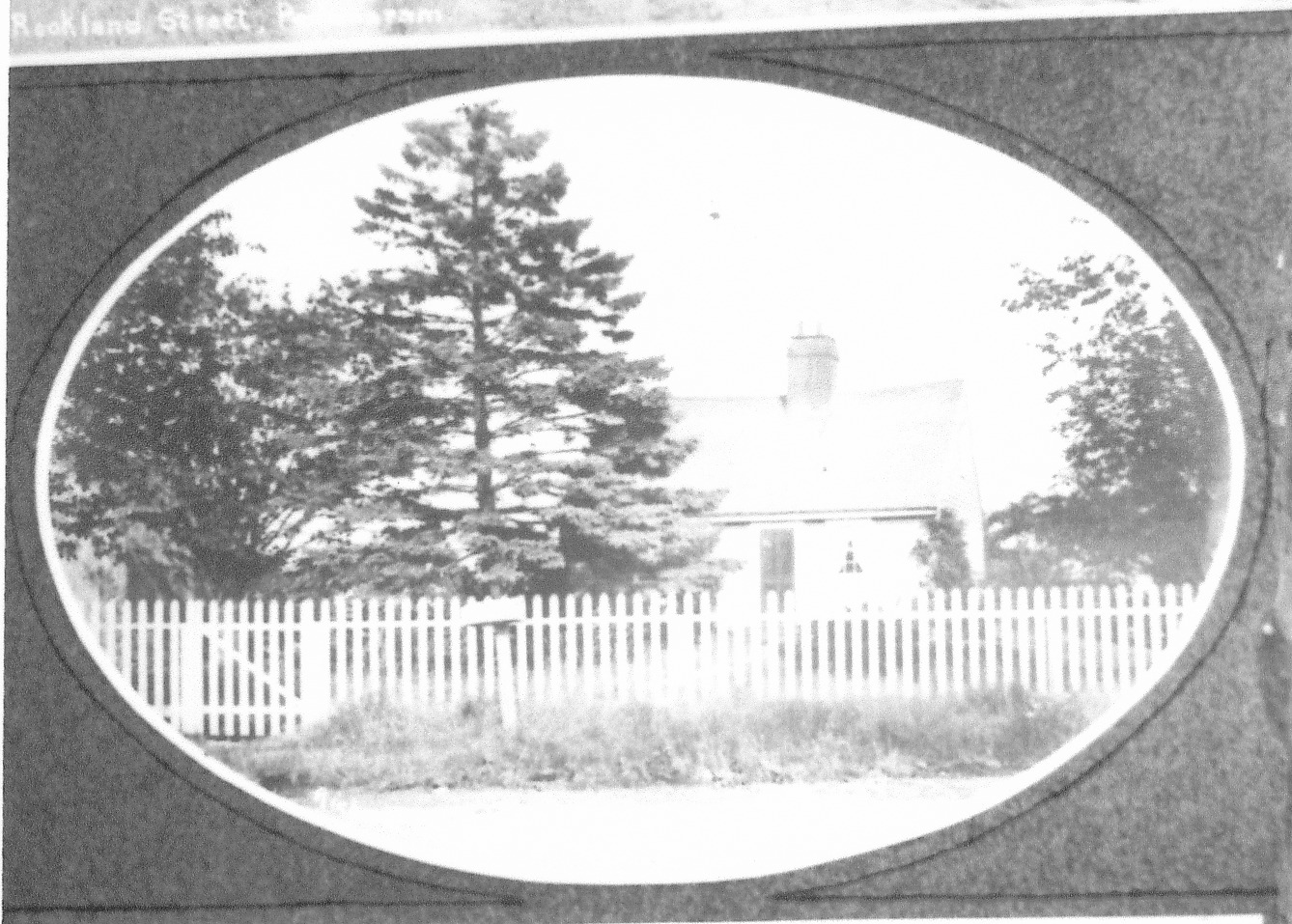 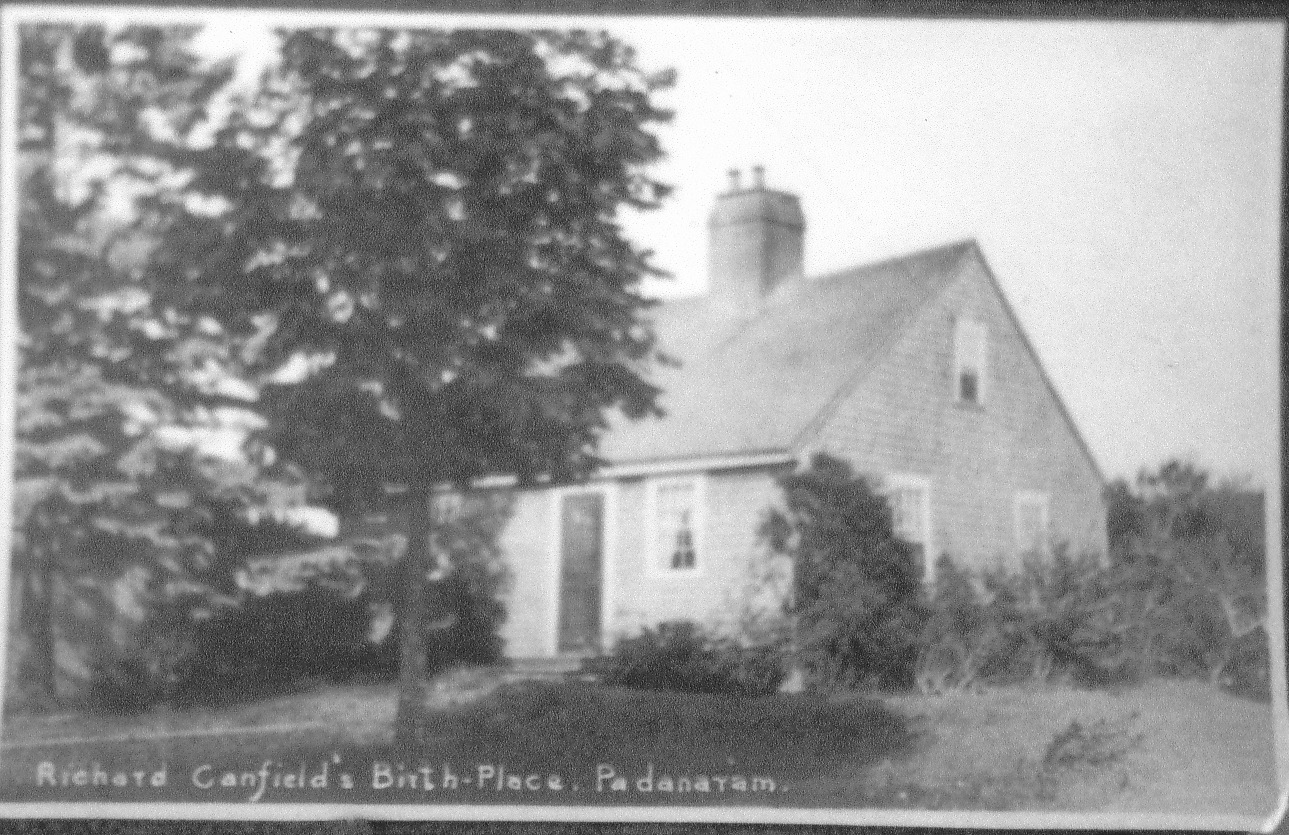 These scanned photographs were found in a scrapbook kept by local artist, historian and photographer, Theodosia Chase (1875-1974). It was donated to the Dartmouth Historical Commission. Note the caption on the photo at right: Richard Canfield’s Birthplace, Padanaram. Since Canfield’s mother, Julia Akin Canfield (1820-1884)  lived in New Bedford with her husband, William Canfield (1809-1865), it’s more likely Richard Canfield (1855-1914) was born in New Bedford.  After being widowed, Julia relocated to the Akin House where she lived until her death.

[More on Akin family genealogy and family anecdotes in a future post.] 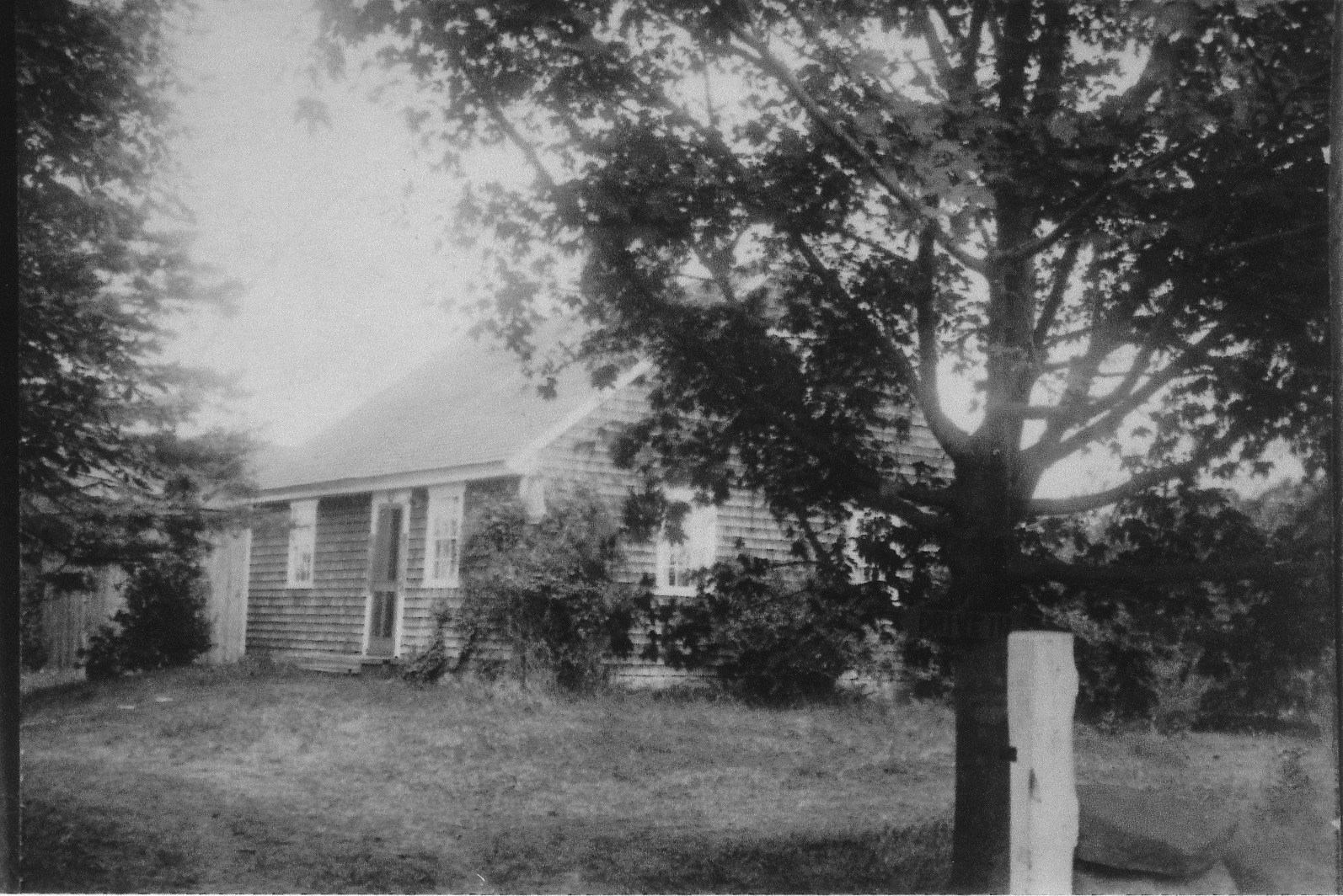 Another photograph of the Akin House from the Dartmouth Historical Commission’s collection donated by David Santos.  The caption states: J. (T.) Chase, Mrs. Rhonda Kimball Howes, related to Richard Canfield.” To the left side of the house (the north side) the barn can be seen, since demolished. Date unknown. This photograph was likely made by Theodosia Chase. 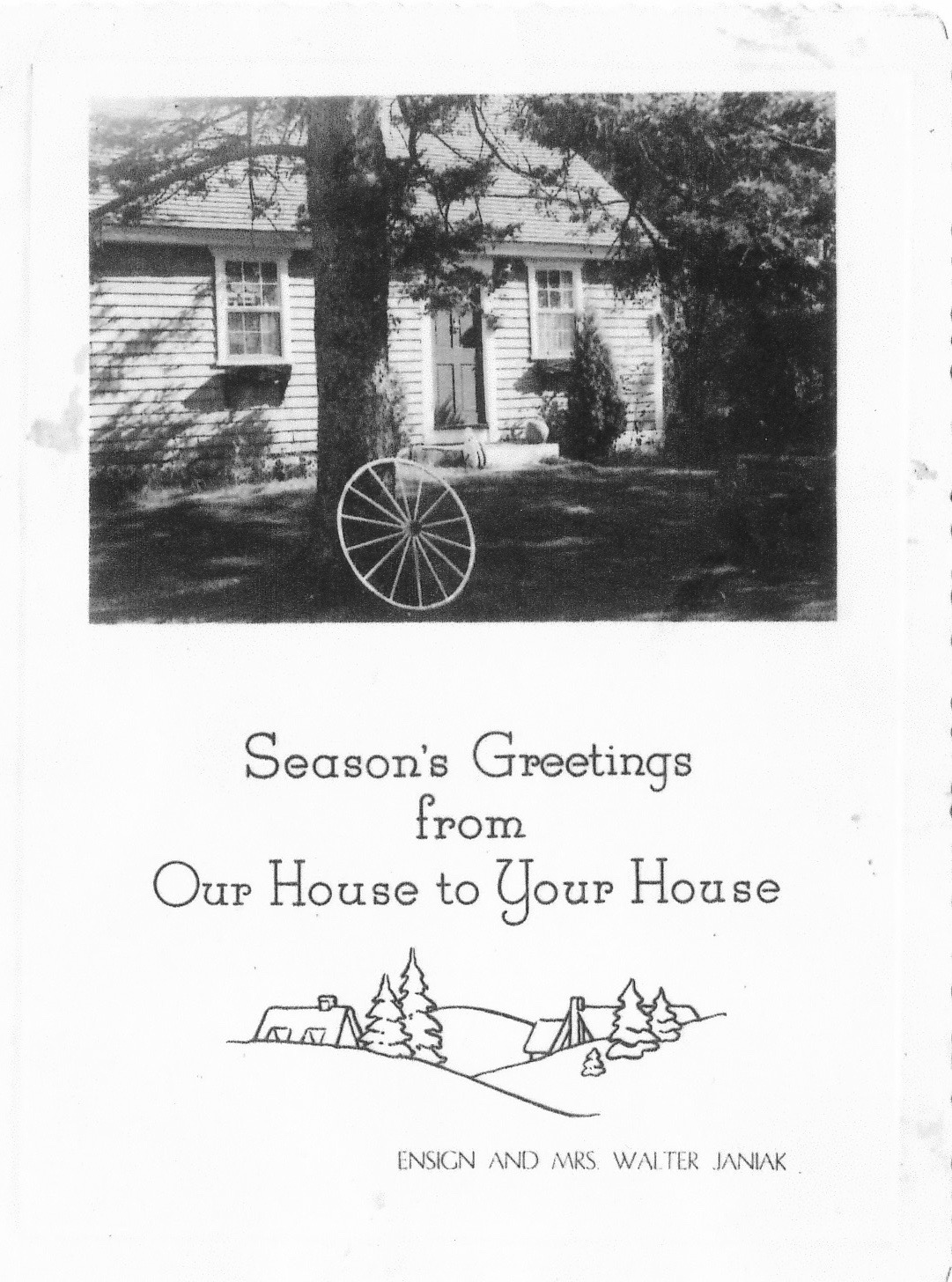 A circa 1945 Christmas Card from the Janiak family to the Weeks family in Dartmouth. Greeting cards, like this one, with an image of the family home were typical of the times. This artifact was donated to the Dartmouth Historical Commission by Mrs. Francine Weeks of Dartmouth. 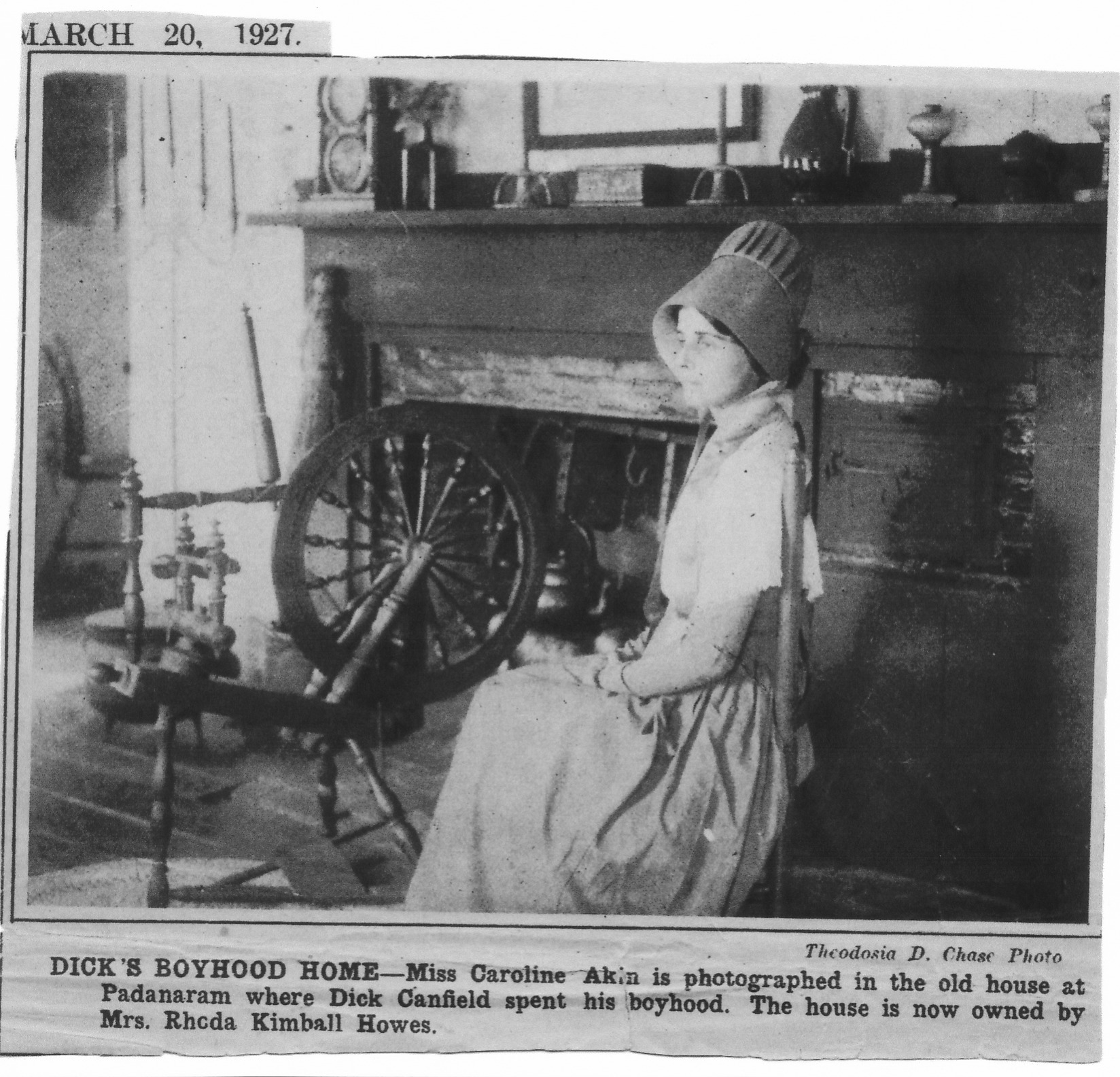 By the caption with this published photo, it could have accompanied an article about Richard Canfield (1855-1914). Theodosia Chase’s photo of Miss Caroline Akin (1901-1978) in Quaker period dress was taken in the gathering room/kitchen at the Akin House and published in a newspaper, probably New Bedford’s Evening Standard, in March 1927.

According to Helen Akin Klimowicz, Caroline (Carolyn) Akin was the daughter of Charles G. Akin (1870-1953) and Caroline Swain Kelley (1876-1950). Remembered fondly by Mrs. Klimowicz, “Aunt Car” is the sister to her father Charles G. Akin Jr.’s (1900-1983.) Caroline married John Frederick Wareing (1902-1987) on August 15, 1938 and in their senior years owned a house on High Street, not far from the Akin Cemetery and the Akin House. They enjoyed sailing in their small boat named The Green Duck. Caroline Akin Wareing was proud of her Quaker heritage thanks to the influence of her maiden aunt Helen Akin (1834-1927).

It bears repeating that historian Henry B. Worth (1858-1923) wrote extensively about local history, Padanaram Village and the Akin Family. See archives on our website and visit the New Bedford Whaling Museum.

Peggi Medeiros, DHPT board member, local researcher, historian and author [New Bedford Mansions] has dug deeply into Akin family history, finding important nuggets that few others come across.  Also check the archives on this website for her Akin Family narratives. Peggi continues her research on the Akins, uncovering new information all the time. Peggi writes a bi-weekly column about area history for the Standard-Times called “Mansions, Mansards and Mills.”

Thanks to the Akin Family descendants for their invaluable help in developing this blog.  Without reliable and source-based information through access to the David Akin Family Tree (built by Robert Larry Akin), we could not tell the story of the lives of the Akin ancestors. Equally valuable is the anecdotal information [and artifacts handed down] provided by Larry’s cousins, Helen Akin Klimowicz, Katie Simenson, and Judith Akin Smith.

The story of the Akin House with its extensive family history about its inhabitants is rare among historic houses in the area.  With a wealth of information at our disposal, we have been able to fill gaps in history, especially the lives of the Akins in Dartmouth during the late 19th and early 20th centuries because of the Akin descendants.

« Preservation & Restoration Progress at the Akin House, Part 1.
The Eighteenth Century Cape Cod Post and Beam––Merging the Old with the New: Part 2. »
View more posts from this author