Listed on the State Register of Historic Places and deemed eligible for listing on the National Register, the Akin House is one of the oldest houses in the Town of Dartmouth, Massachusetts. Built in 1762 by housewright Job Mosher and purchased by Elihu Akin in 1769, the Akin House is older than America. The age of the house alone would give the house architectural importance, however, the house also has historical significance. It remained in the Akin family for 234 years. The Akins were one of Dartmouth’s founding families who were instrumental in the development of the town.

The Akin House was one of a few houses that survived the invasion of the British and the subsequent burning of much of Dartmouth, New Bedford and Acushnet during the American Revolution. As the direct result of the raid, the Akin family lost everything except the house on Potter’s Hill and surrounding land. Elihu moved his wife and children there.

The youngest of Elihu Akin’s sons, Joseph, grew up in the house and his daughter, Julia Ann, married an up and coming young man from New Bedford, William Canfield. Canfield later ran a New Bedford hotel called the Sheridan in what is today the New Bedford Whaling National Historical Park.

Julia Akin’s son, the great grandson of Elihu Akin, became one of the great figures of the Gilded Age. Although born in New Bedford on June 28, 1855, Richard Albert Canfield spent most of his thirteenth summer actually living with his grandmother in the Akin house.  Canfield whose career as a gambler and Wall Street operator might not have pleased his Presbyterian forebears, eventually lived on a grand scale and even invented a variation of Solitaire still called Canfield. The Gilded Age “Prince of Gamblers” opened three gambling houses, including Canfield House in Newport, Rhode Island that is today known for “elegant dining in a formal Victorian atmosphere”. 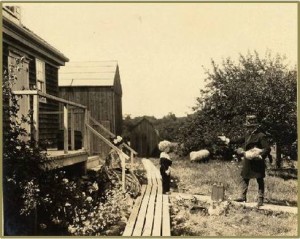 Down to the Sea in Ships film still

In 1921 the Akin House became a part of film history as a location for Down to the Sea in Ships. The silent film classic contains rare footage of a whaling voyage filmed on the Wanderer and the Charles W. Morgan, and clearly shows the condition of the Akin house in 1921. The house is called the “Old Homestead” and appears in a late sequence of the film. The film provides the only photographic evidence of the barn and shed. It also provides visual evidence of early twentieth century landscaping and the presence of a wall and gate on the rear property line.

In addition to the intrinsic value of the Akin House as a cultural resource, the site’s prominence on Dartmouth Street, a well-traveled roadway between Dartmouth and New Bedford much as it was in the eighteenth century, offers a unique perspective of the past intermingling or co-existing with the present.  The property offers a striking reminder of our past in the midst of a busy and bustling neighborhood––in effect, a heritage site that cannot be missed.

-Selections from Historic Narrative about the Akins of Dartmouth by Peggi Medeiros. The full narrative of the Akin family history can be read below. 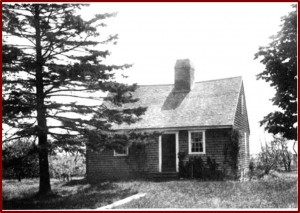 The Akin House ca. 1930s, photos by Manuel Goulart, after barn and outbuilding were demolished and before a garage was built. [NBWM/ODHS collection] 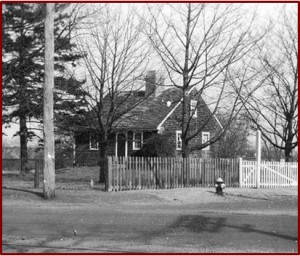