The owners of a 2.68 acre parcel have applied for a demolition permit to tear down this historically significant house built in the late 1720s using a gambrel house style which was typically seen in Plymouth County.  It was relocated to its current site at Mishaum Point about 1927.

The Dartmouth Historical Commission, of which I am a member, held a public hearing on Monday, June 25.  The owner presented her concerns and plans for the site. Following a presentation and discussion with the owner, the Commission voted to declare the house “PREFERABLY PRESERVED” a technical term from our demolition delay bylaw to impose a 6-month demolition delay. This is considered a time-out to work with the owners to come up with alternatives that could save the house and accommodate their plan for the property which we hope could result in a win-win.

We thank the owners for expressing an interest and willingness to work with the Commission and preservation experts during this delay period.

This endangered historic house has received a great deal of reporting from the press since the demolition delay was imposed on June 26, 2018.

In an editorial in the New Bedford-Standard Times on Sunday, July 15, 2018, it is clear that this house has captured the interest of the SouthCoast community.

Old Dartmouth History of the Early Eighteenth Century: A Tale of Founding Settlers and One Important House

Ralph Earle who died in 1718 owned farmland purchased from Captain Benjamin Wing. Earle devised his farm to his only son, Barnabas Earle, who built the gambrel style house between 1723 – 1735. The farm and house later known as “Arrowhead House” was passed on to Earle’s nephews, John & Benjamin Slocum.

The Early Twentieth Century Journey of this Important House

It was moved from its original location at the head of Apponagansett Bay (about 250 Russell’s Mills Road) by Mrs. Robert W. Swift, mother of Humphrey H. Swift and his wife Pam, in 1927.

Mrs. Swift had it taken apart, board by board, and reassembled on her property at Mishaum Point. It was placed on a granite outcrop forming a natural hearth for the two fireplaces in the living room, marrying the natural landscape to this historic house as though these distinctive cultural assets were meant to be together for eternity.

Historians noted that layers of old wallpaper and newspaper were removed to expose the old feather-edged pine paneling which she (Mrs.Swift) then rubbed with bees’ wax.

[Sources: Henry Worth historical narratives prior to 1909 plus other accounts from the 20th century] 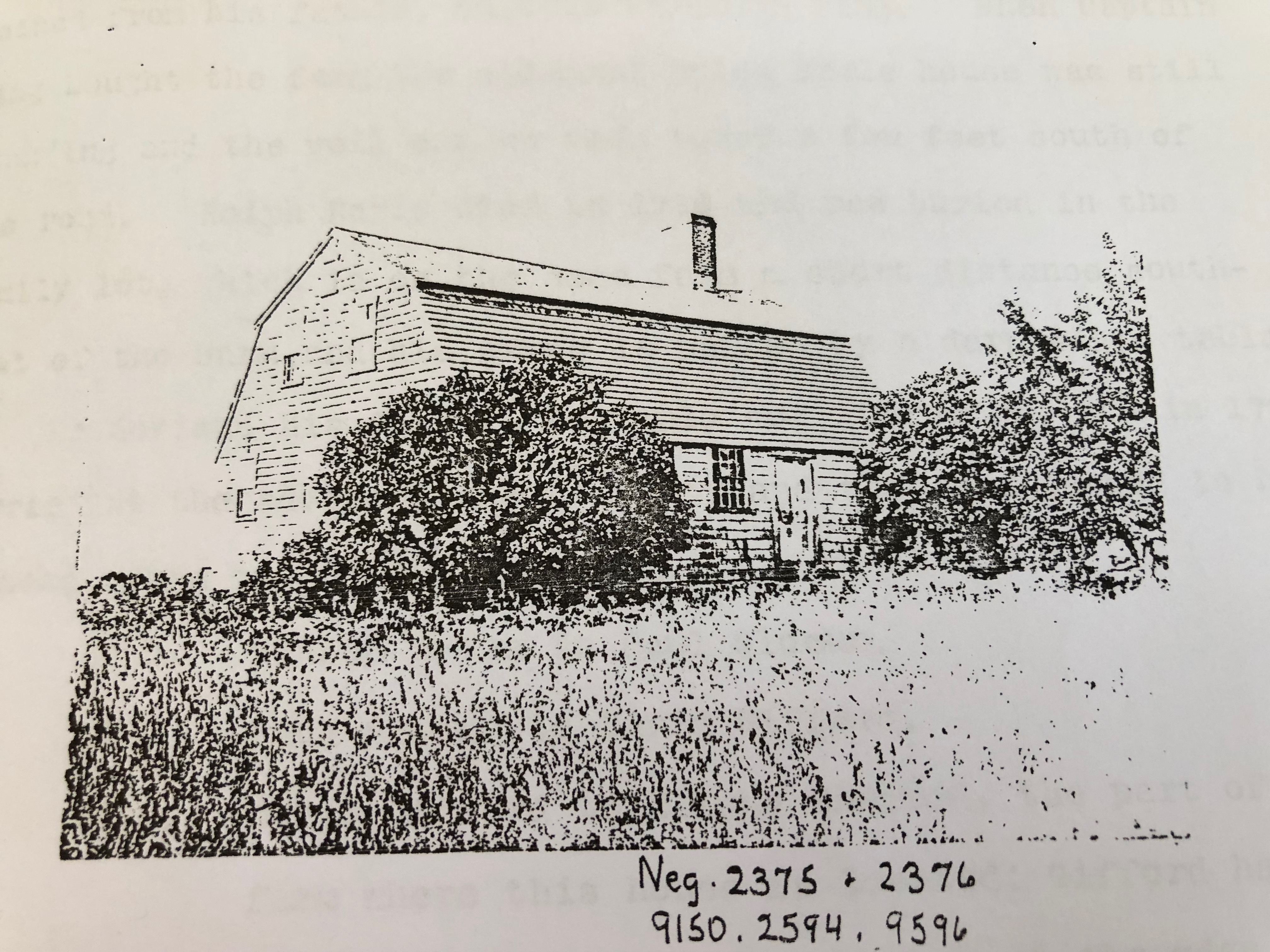 Why is this House so Historically Significant to the Town of Dartmouth?

Unquestionably integral to Dartmouth’s Early History and its Founders

Its Rare House Style:  This style was widely used in Plymouth and and in very few cases adopted in old Dartmouth. Except for later replicas, those few 18th century original gambrels in Dartmouth are long gone!

One of the oldest extant houses, of any style, in very good condition.

Historic houses that are relocated generally do not retain their original architectural elements. This house is different!

Its relocation to Mishaum Point about 1927 breathed new life into this early 18th century house.

It was methodically reassembled by what must have been expert craftsmen giving this house strength, structure, stability and support.

This house includes early 20th century craftsmanship with rare and preserved architectural elements and features from the early 18th century.

Unless someone happens to have explored the depths of Dartmouth’s early history or knows about ancient cemeteries in that area, many simply drive by, totally unaware of this location’s significance, nearby 250 Russell’s Mills Road. Only the very attuned and sensitive should feel the presence of ghosts. 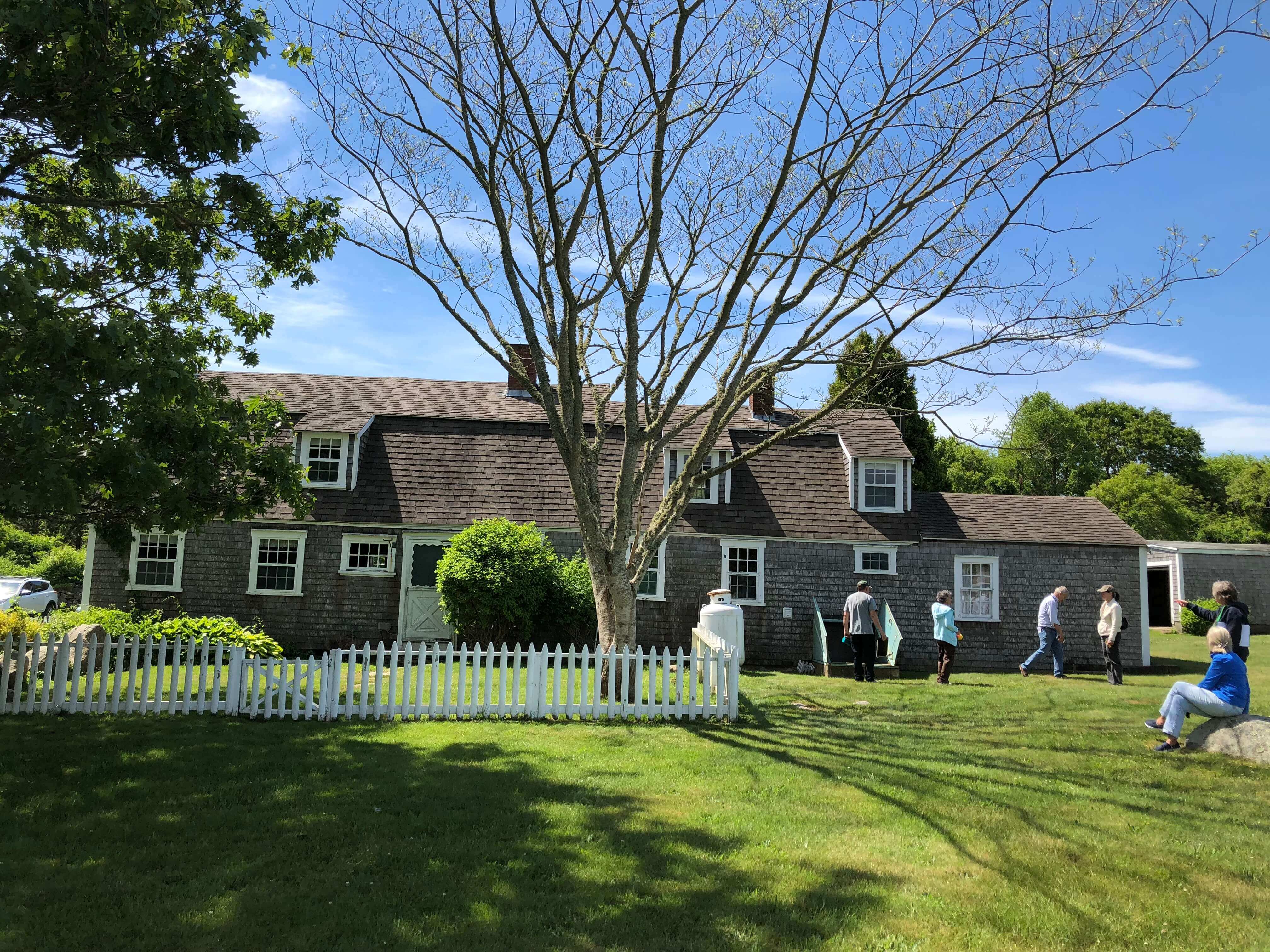 The Historical Commission and preservation advocates tour the house and grounds on June 16, 2018. A wing and a few other notable enhancements include dormers.

The Stunning Interior of Original Features 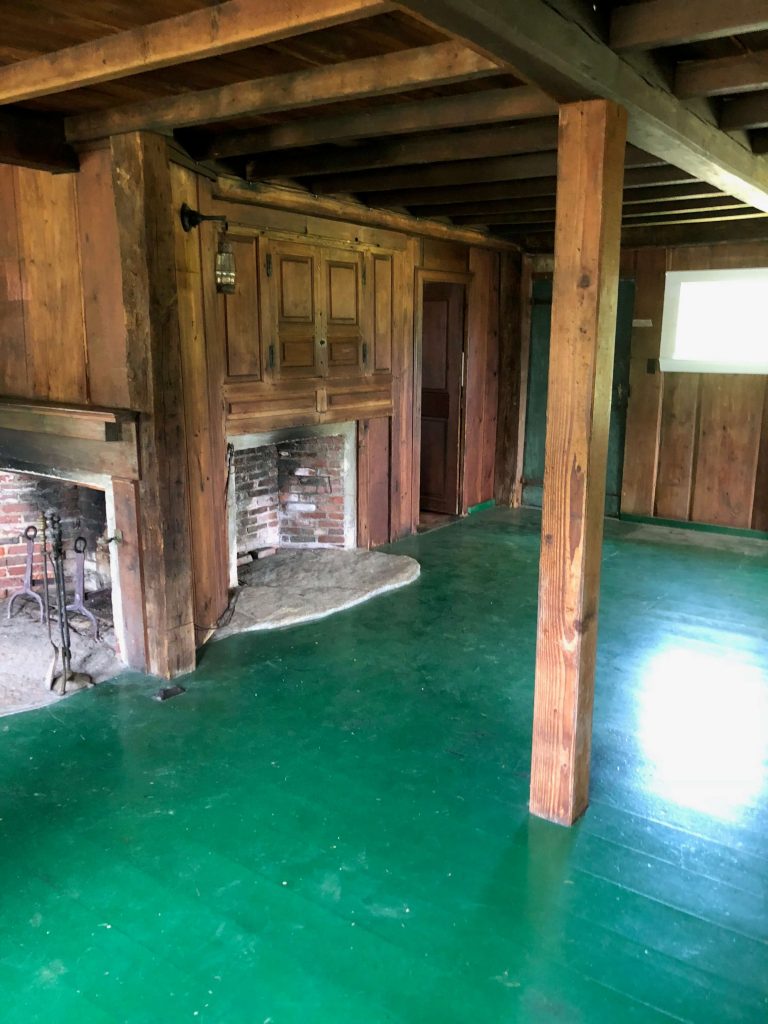 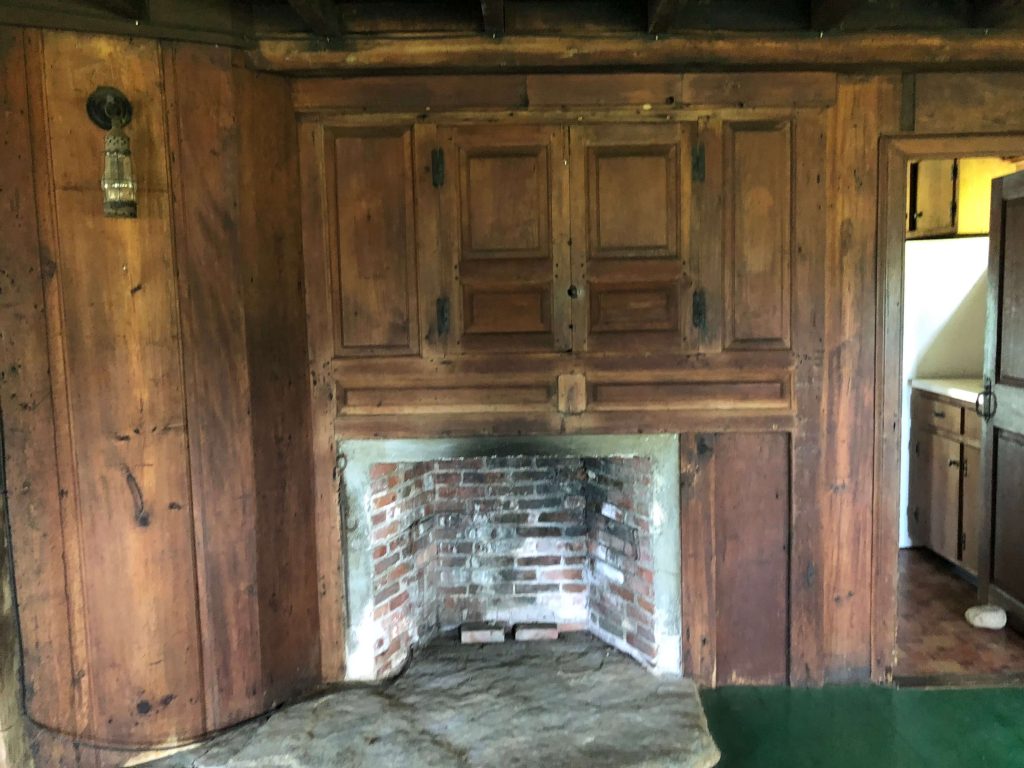 Left image, a view of the room showing the two fireplaces adjacent to each other. Floor ca. early 20th century with an original subfloor beneath. Green paint, a modern touch, brightens up the room. The ceiling joists are examples of late 1920s construction when craftsmen reassembled the house. Post in center of room would have been added for stability. Above, original wall panels and raised panel doors above the fireplace add a simple elegance to this room. Wonderful examples of second period architecture (1710-1740). 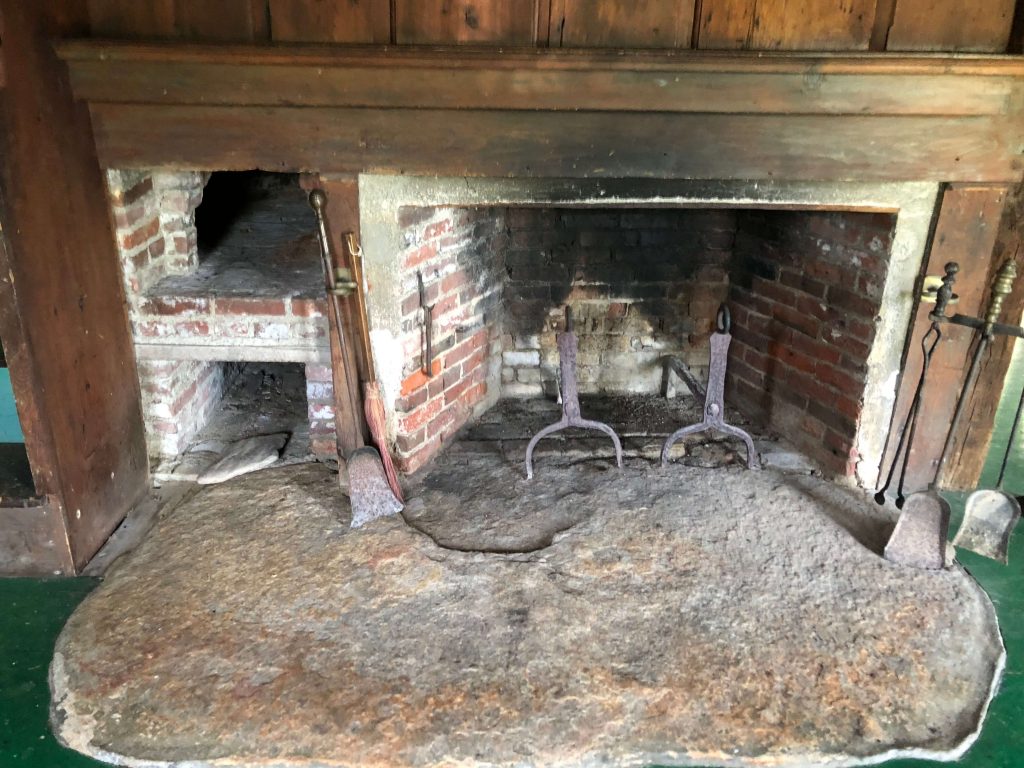 Above, Firebox and brick work rebuilt ca. 1927 likely using brick from original site on Russell’s Mills Road. Outcropping of granite in situ serves as the hearth. Right, doorway to the second story. Open shelves typical in early houses for storage. 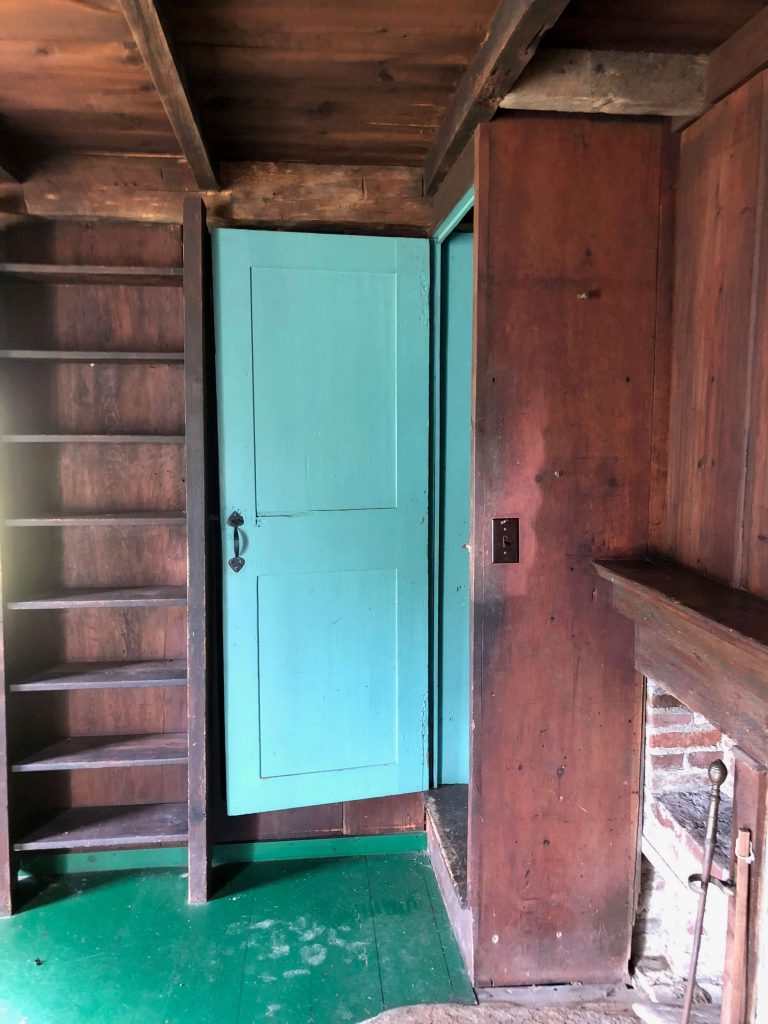 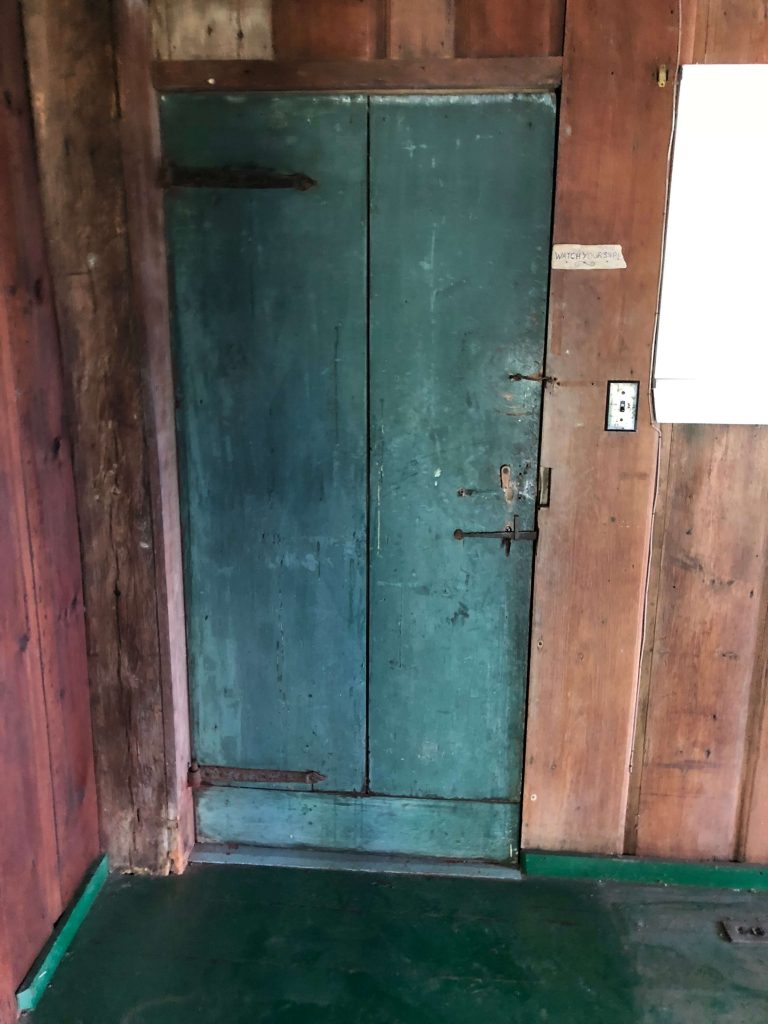 Original door leading to the back yard. To the left of the door can be seen a distinctive original gunstuck style corner post. 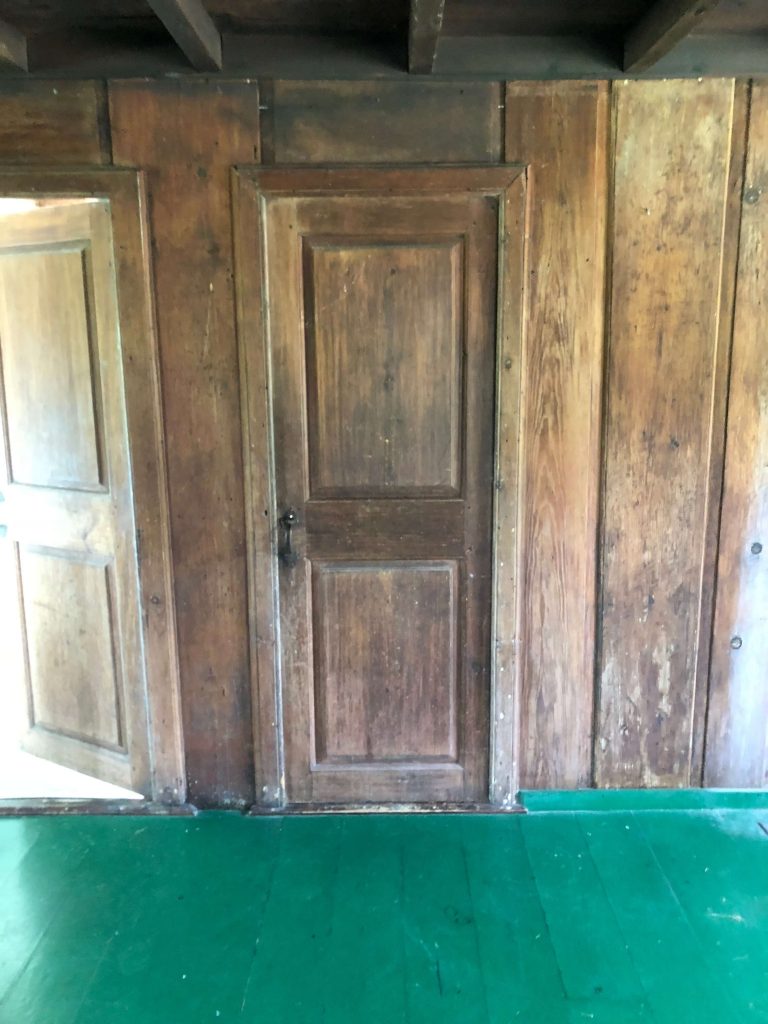 Raised panel doors of second period of architecture (1710-1740) surround the keeping room. The original wall boards located around this room in excellent condition as well. 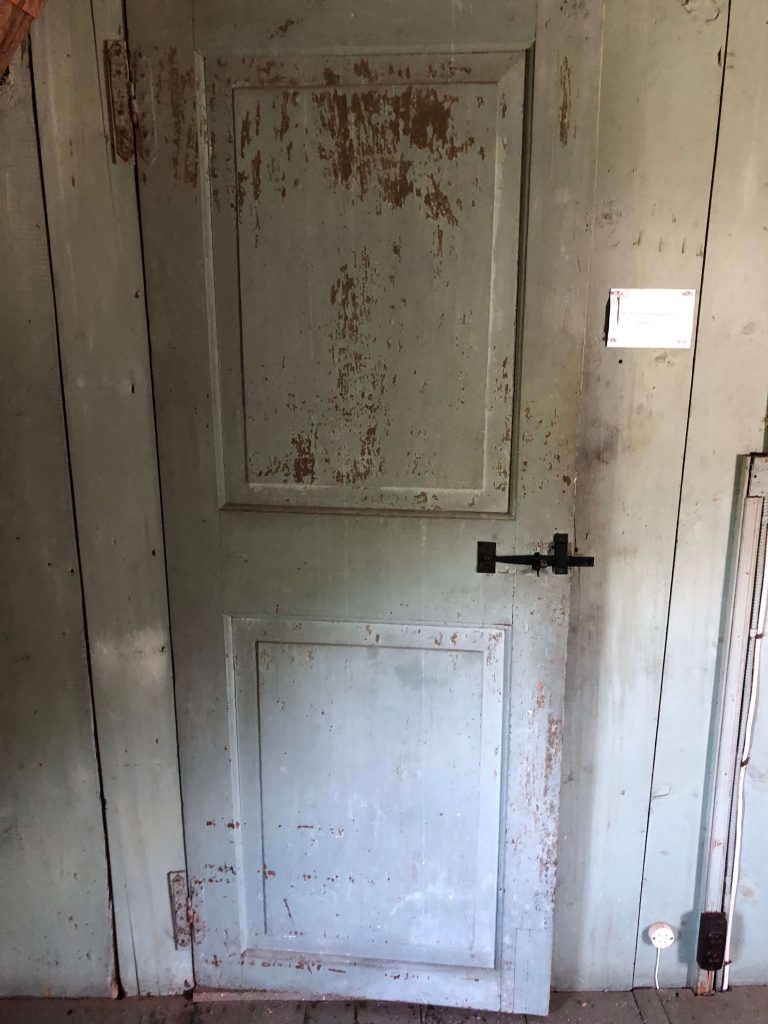 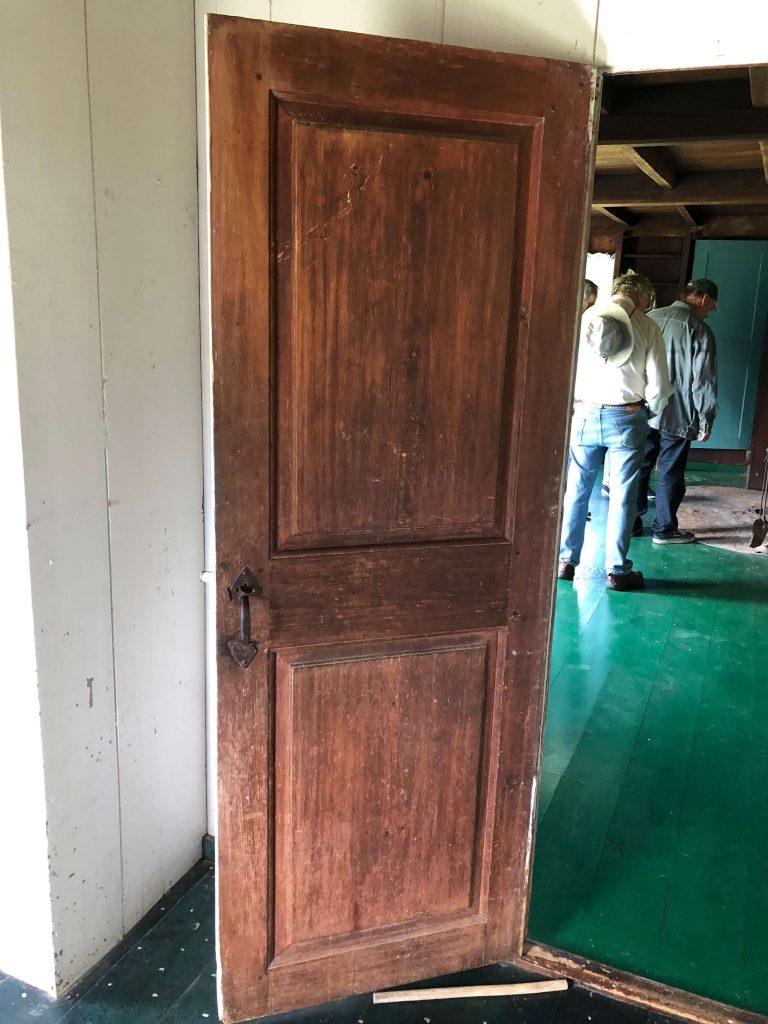 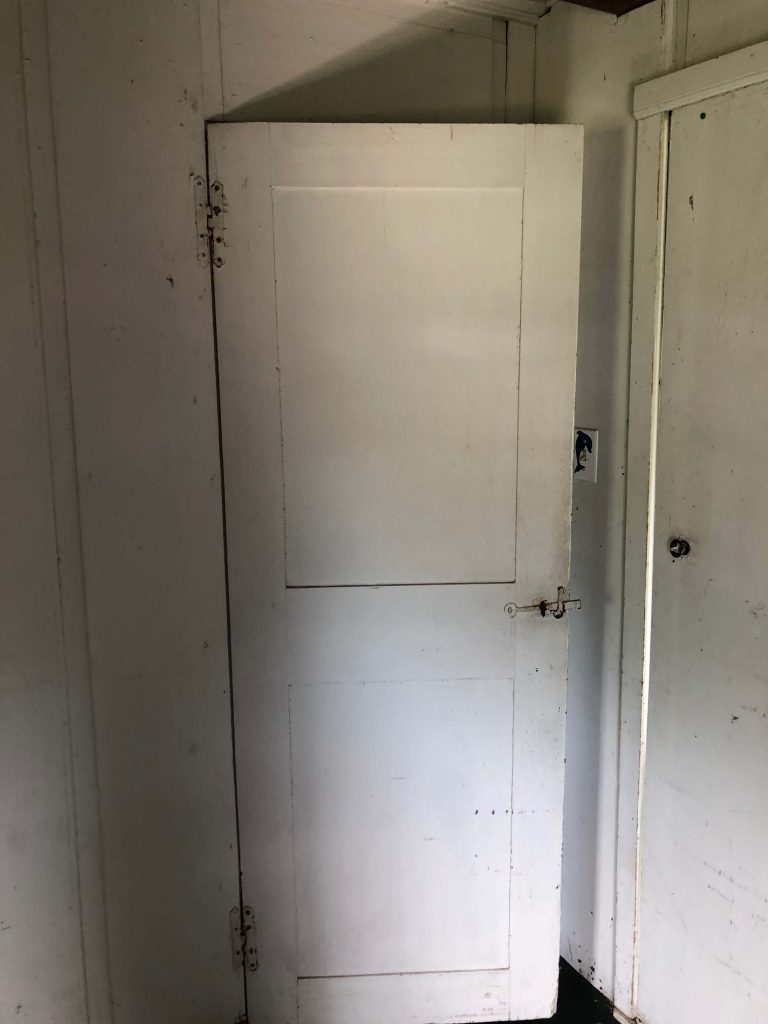 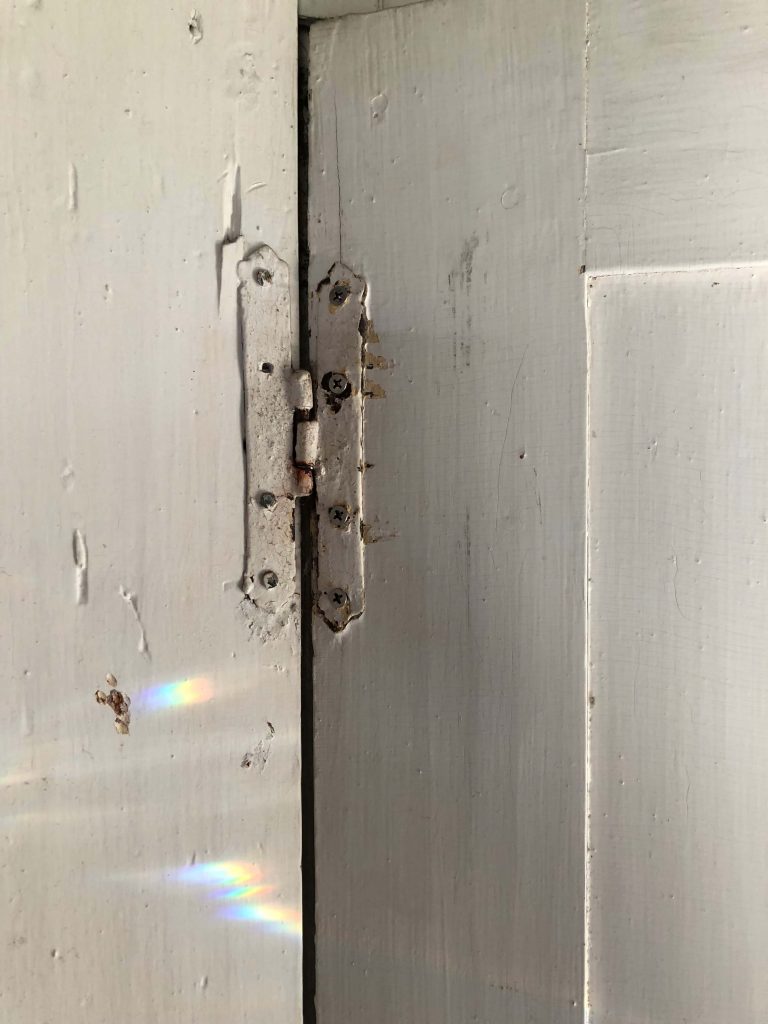 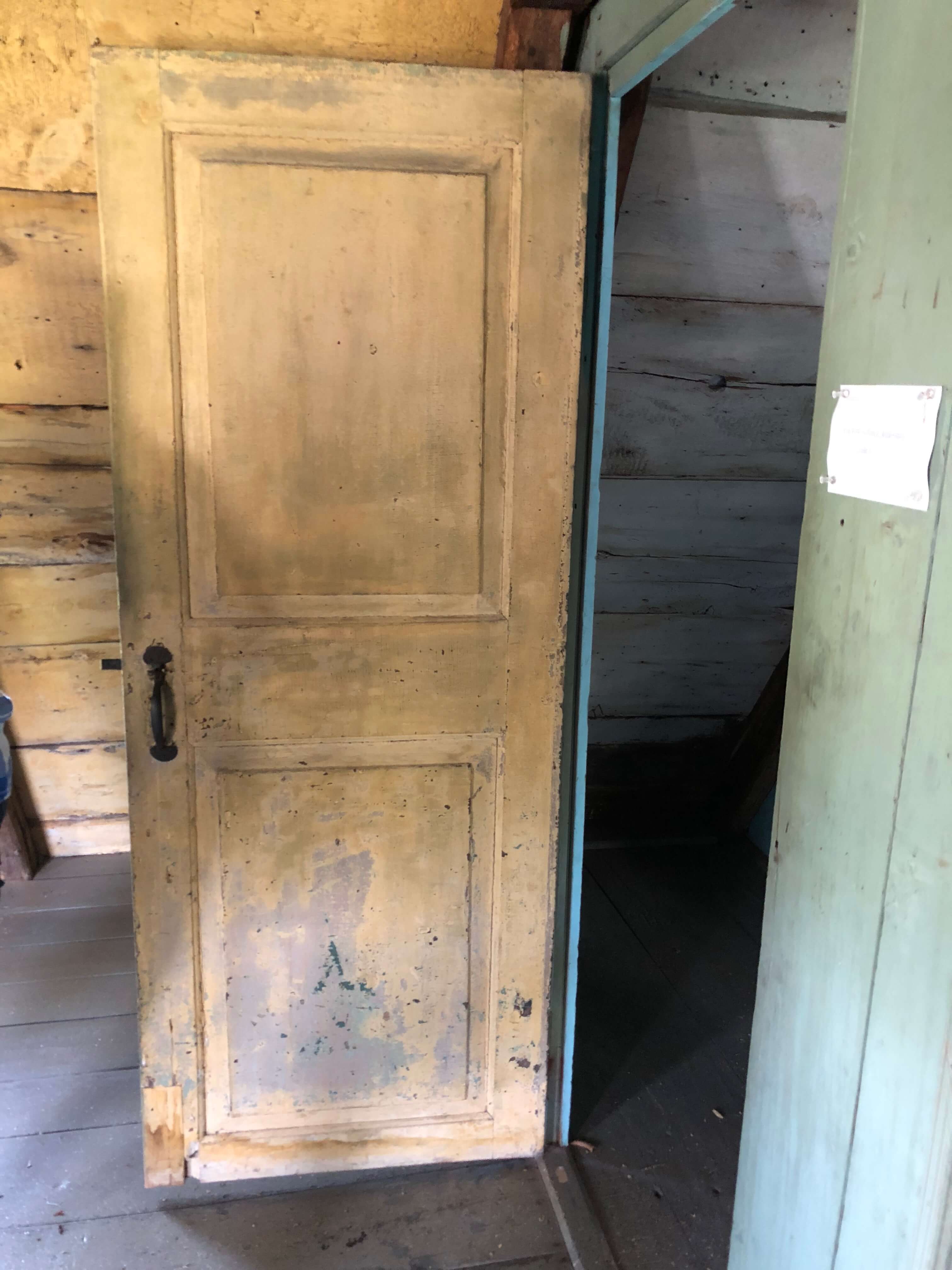 This door found connecting the second floor wing to the original main house. This raised panel door and latch in beautiful condition just as the others in the main house. 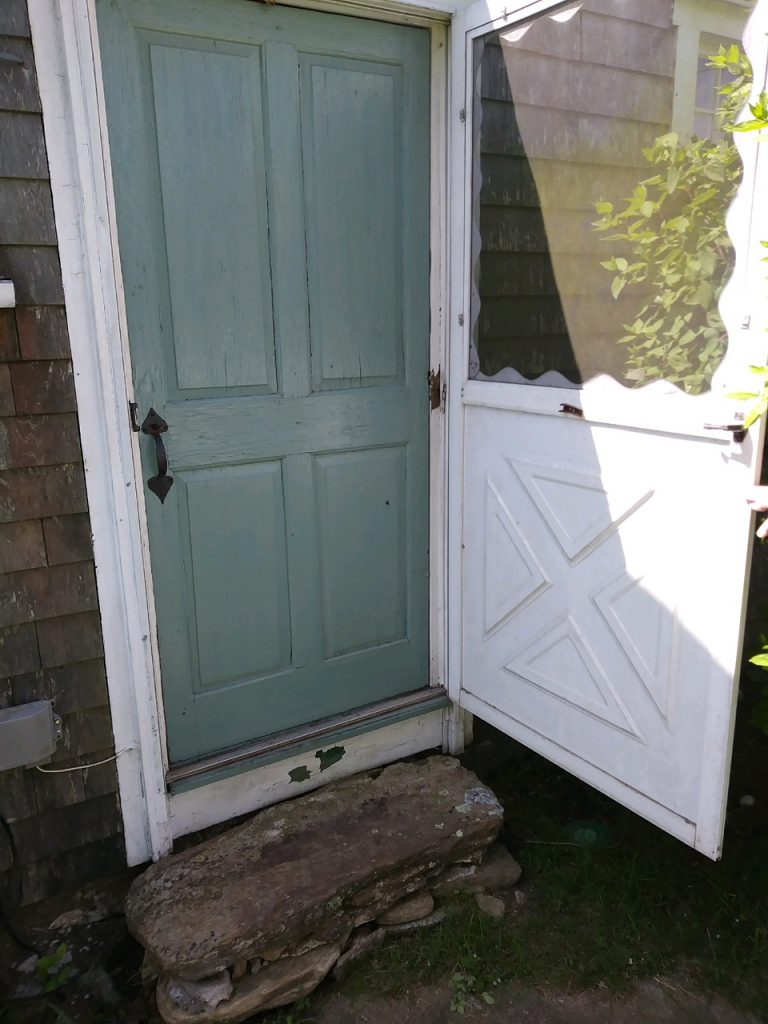 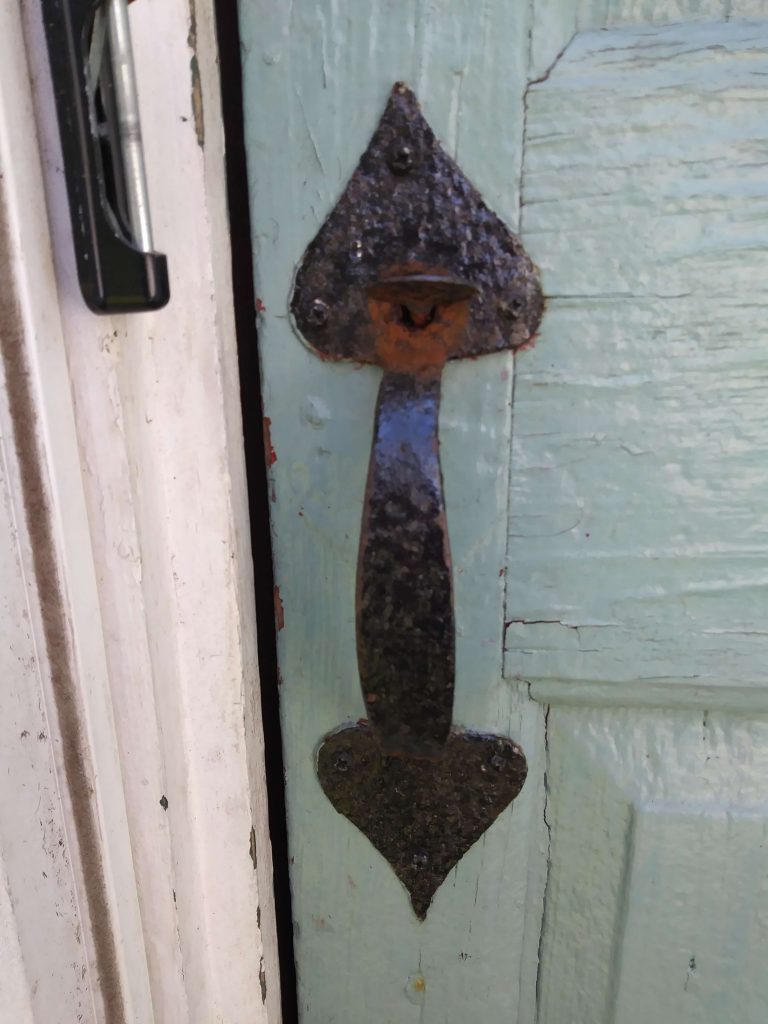 This original latch has been duplicated in modern homes. A classic!

A look at the bits and pieces adding to historical significance. Details and patina matter! 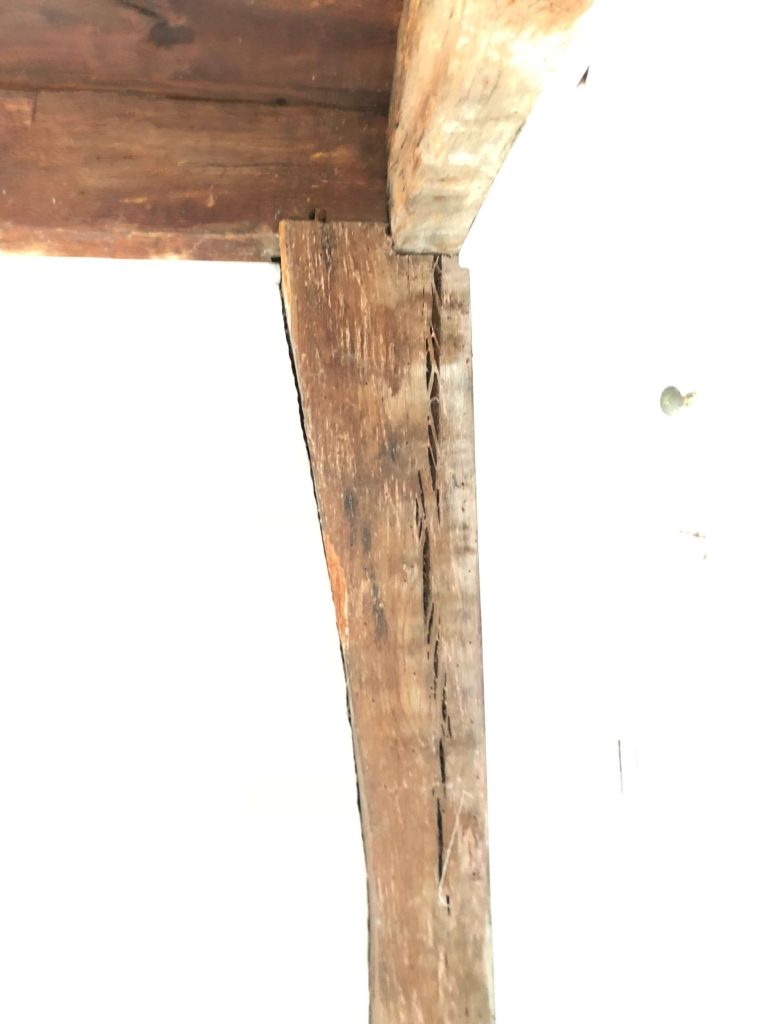 High contrast image of a gunstock post without the distraction of the corner walls. 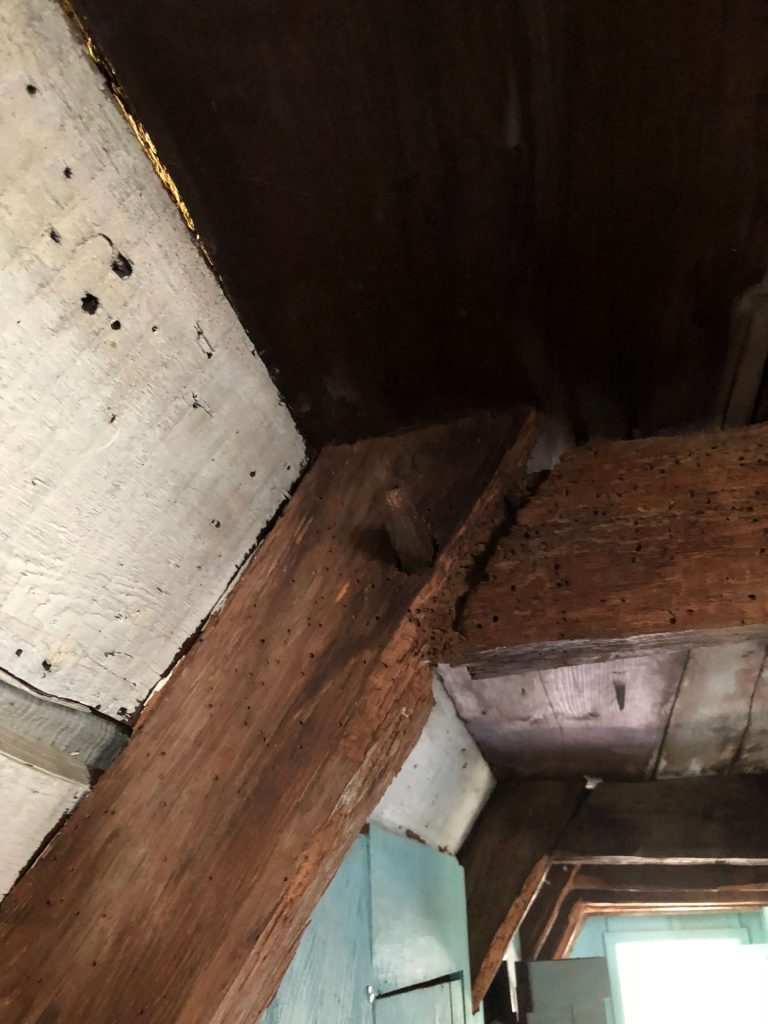 Mortise and tenon presumably secured by a peg crafted later. 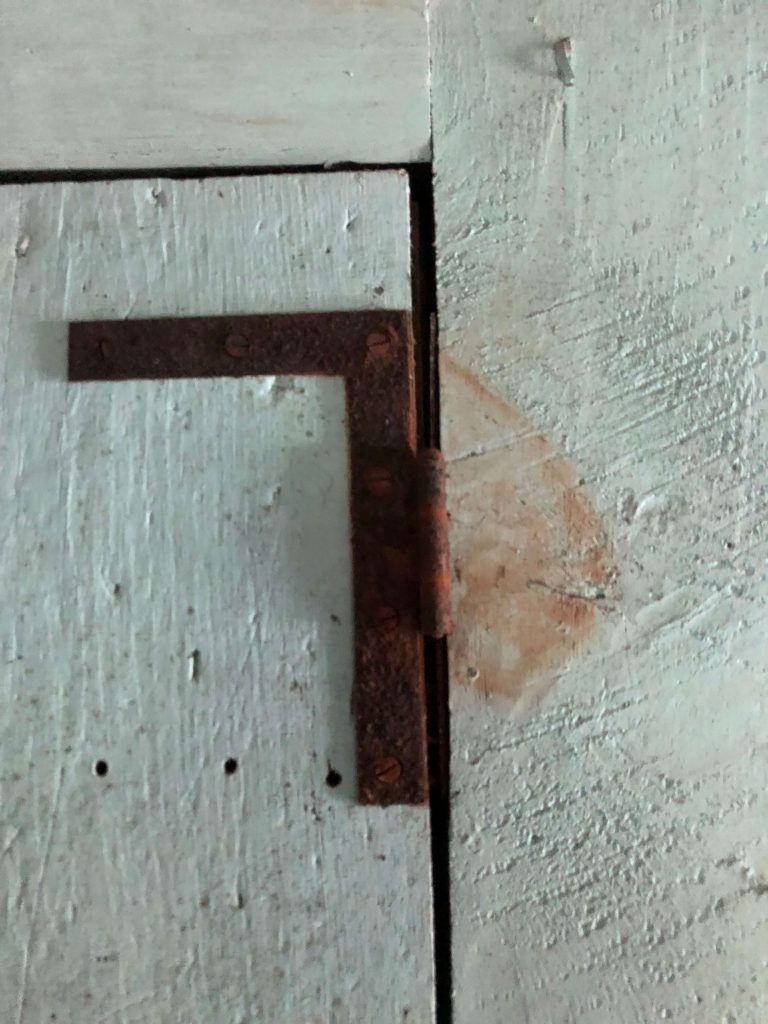 HL-Hinge, most common in the early 18th century.. 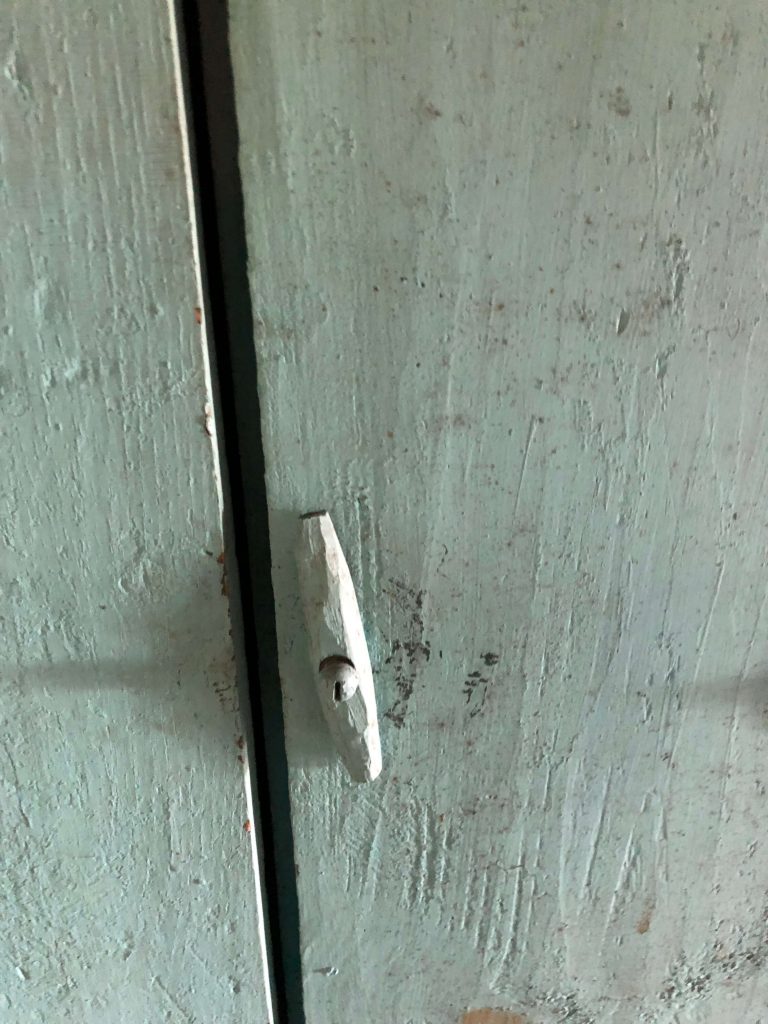 An cabinet closure, practically crafted, known as a dog. 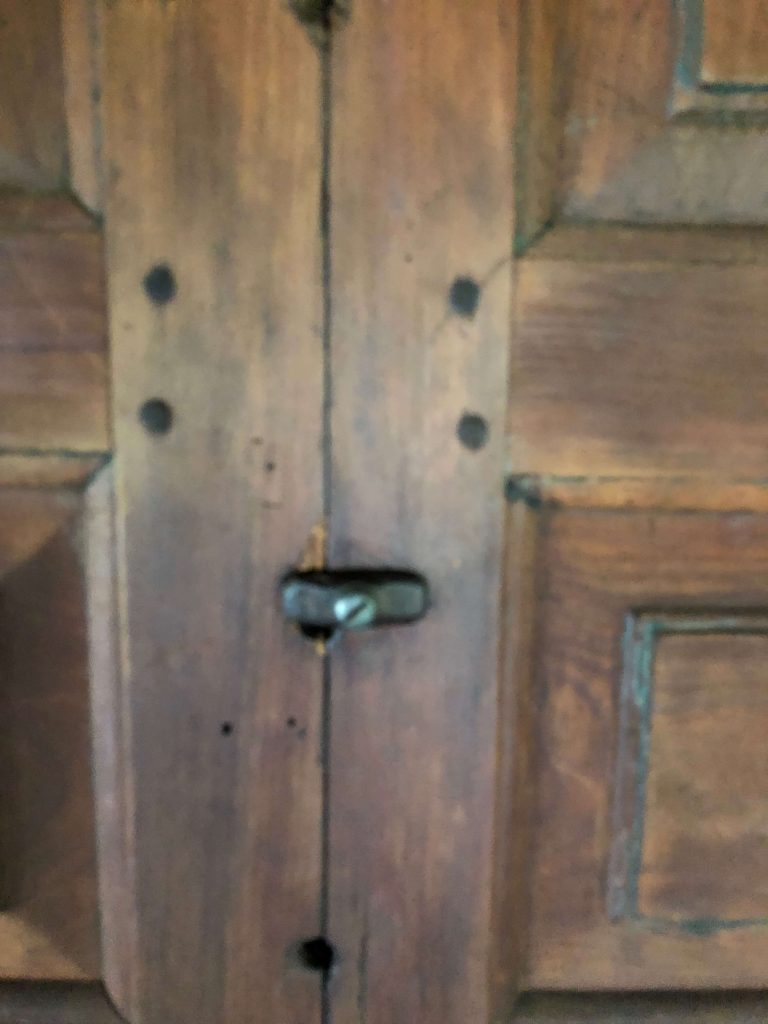 Latch detail on raised panel cabinet in keeping room above the fireplace. 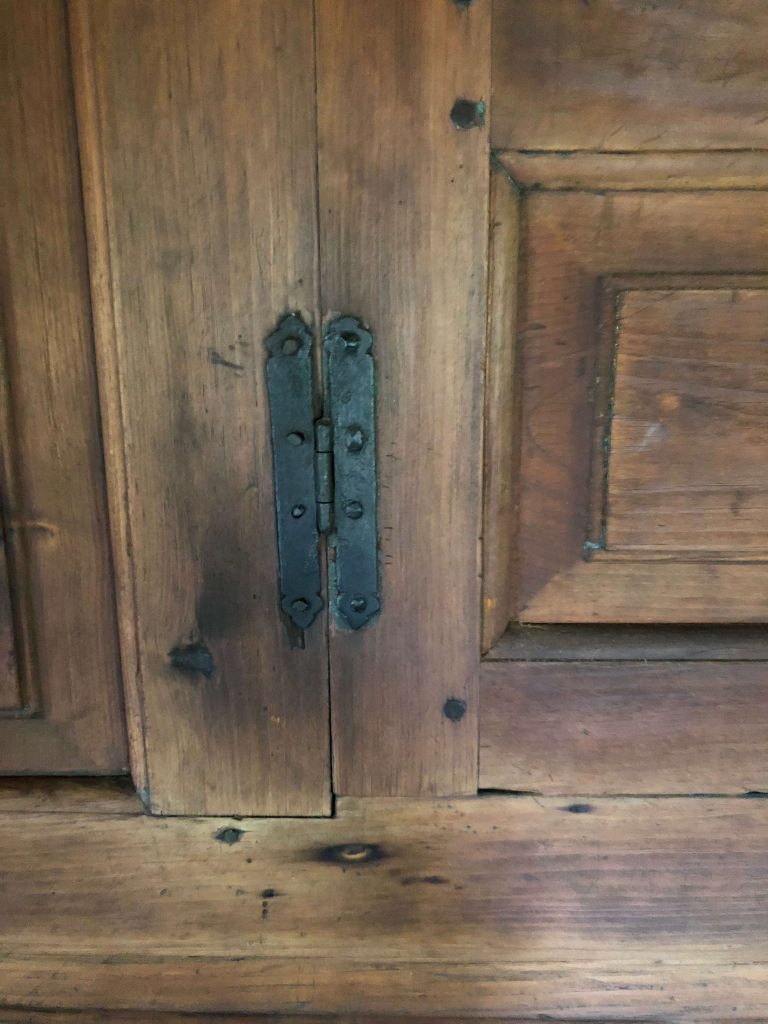 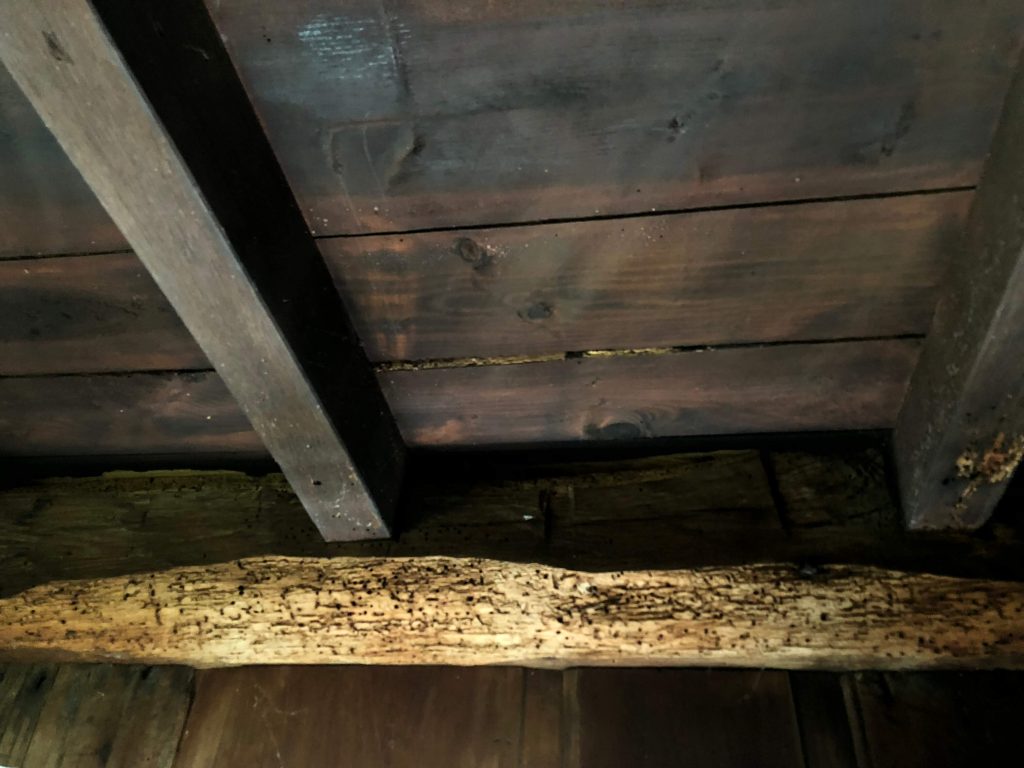 Little evidence of powder post beetle damage. This section only one found. No longer active and long gone! 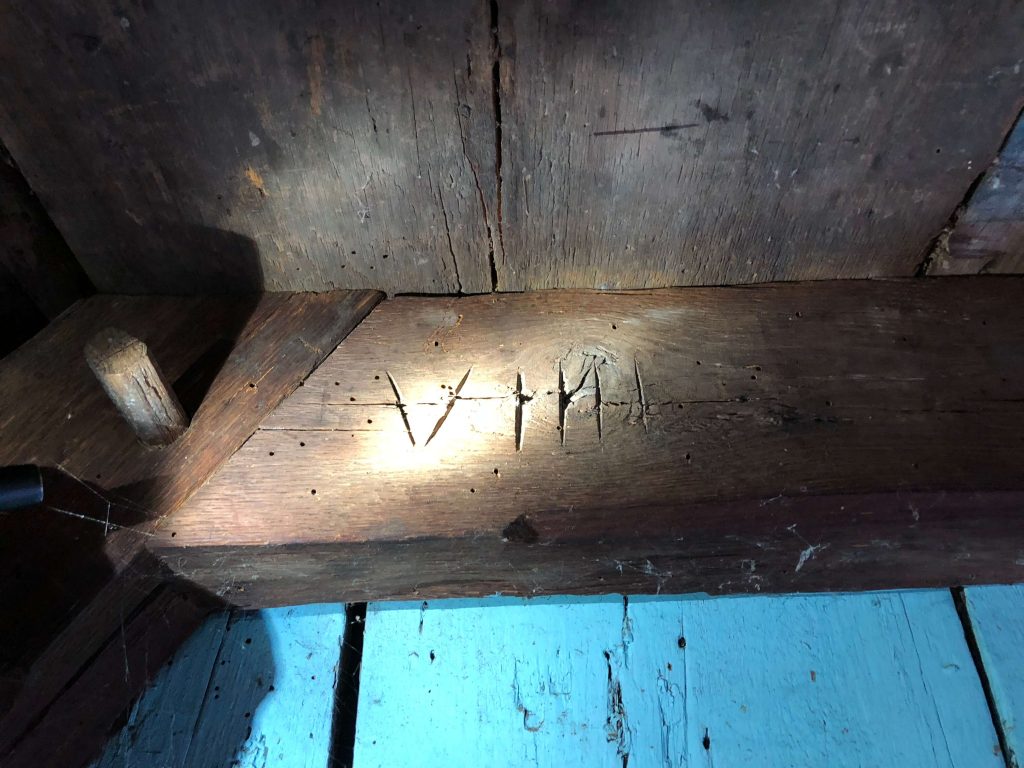 The roof rafters would have been cut and numbered at the mill and assembled on site. The roman number identification system found throughout the house.

In making its assessment about whether or not a house is historically significant even before it holds a public hearing, the Commission relies on the Inventory of Historic Houses and other structures. For buildings, this is known as a Form B.

The Massachusetts Historical Commission maintains a database on the historic inventories throughout the Commonwealth, commonly known as MACRIS.

For those of you who love to get into the details, the Form B Inventory on this house can be viewed here:

A very special thanks to Linda DesRoches, preservation professional and Dartmouth early house expert who’s done her share of historic house preservation. Thanks to the local press for reporting on this house.

Please contact members of the Historical Commission with your comments. See above.

This entry was posted in Education, News.