DHPT Receives a Grant from the National Trust for Historic Preservation

In Search of Incorporating Special Protections in the Sitting Room: Apply for a Grant!

In July, 2018, the National Trust for Historic Preservation awarded a $13,000 grant from the Cynthia Woods Mitchell Fund for Historic Interiors to the Dartmouth Heritage Preservation Trust, Inc. for use in a sitting room /small parlor at the Akin House.  Funds were released on September 26, 2018.

What has been accomplished so far

This grant will be used exclusively to carefully preserve & protect the sitting room & surrounding trim finishes which contain extant & unusual 18th C. features. The most remarkable are original & rare wallpaper adhered to the 18th C. oak & pine wall substrate. According to wall covering experts, believed to be imported from England.

Our contractor, Thomas J. Figueiredo, addressed all the floors including the sitting room and foyer. The wood species believed be a yellow pine used for floors in the late 19th century was in good condition. These were sanded and finished with a poly oil-base intended to withstand foot traffic. The minor repair at the threshold was made using a sample of the same wood species found in the house. 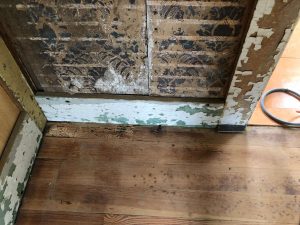 Sitting room floor before any treatment. 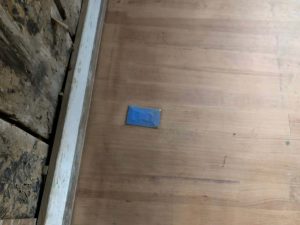 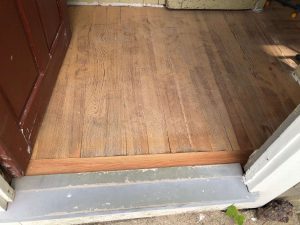 The foyer sanded with a minor repair at the threshold. 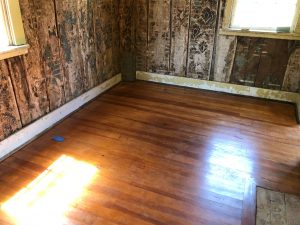 2. a The Sitting Room Ceiling

The ceiling required attention and became the second stage of preservation work in the sitting room. Chris Shelton initially examined the ceiling and tested for its composition. According to Chris’s report, “It is comprised of layers of chalk and no binder. This is traditional lime-wash or white-wash where a wet coating of slaked lime is applied and allowed to dry and revert to calcium carbonate. It forms a low-sheen finish common in architectural settings where surfaces are not heavily worn. There are at least 12 applications visible in the sample testes. … Micro chemical testing for the presence of lead in the sample was negative.”

The treatment called for addressing the instability of the surfaces and removing most of the layers in danger of loosening and falling to the floor. (Samples of this material have been saved for future display.) The ceiling was cleaned and white-washed anew reminiscent of this 18th century practice. One bay on the ceiling was cleaned but left intact along with the adjacent plate, located on the west side of the room. 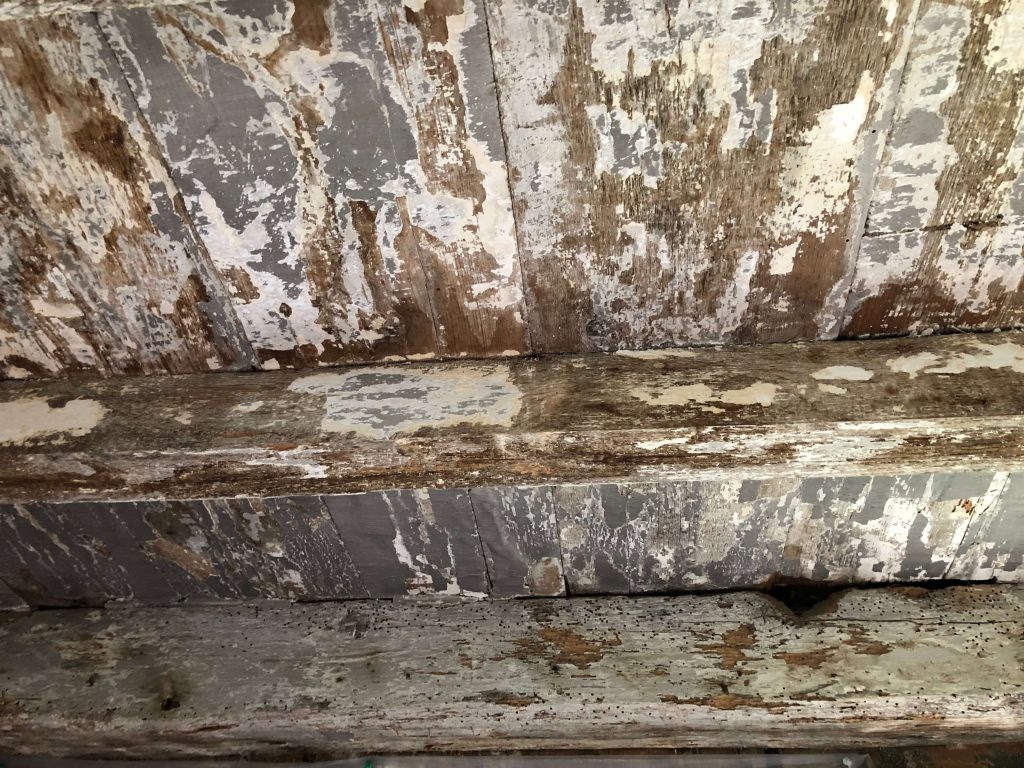 Detail of ceiling bay prior to stabilization and whitewashing. “The exposed ceiling beams and ceiling boards (subflooring) they support in the sitting room have a rough, coarsely-textured, buildup of white material with a gray surface color. The material is irregularly applied with smooth passages and rough brush marks and appears directly applied onto the wood surfaces.”-Chris Shelton’s report. One bay of the ceiling while stabilized was left intact to show the original surface. 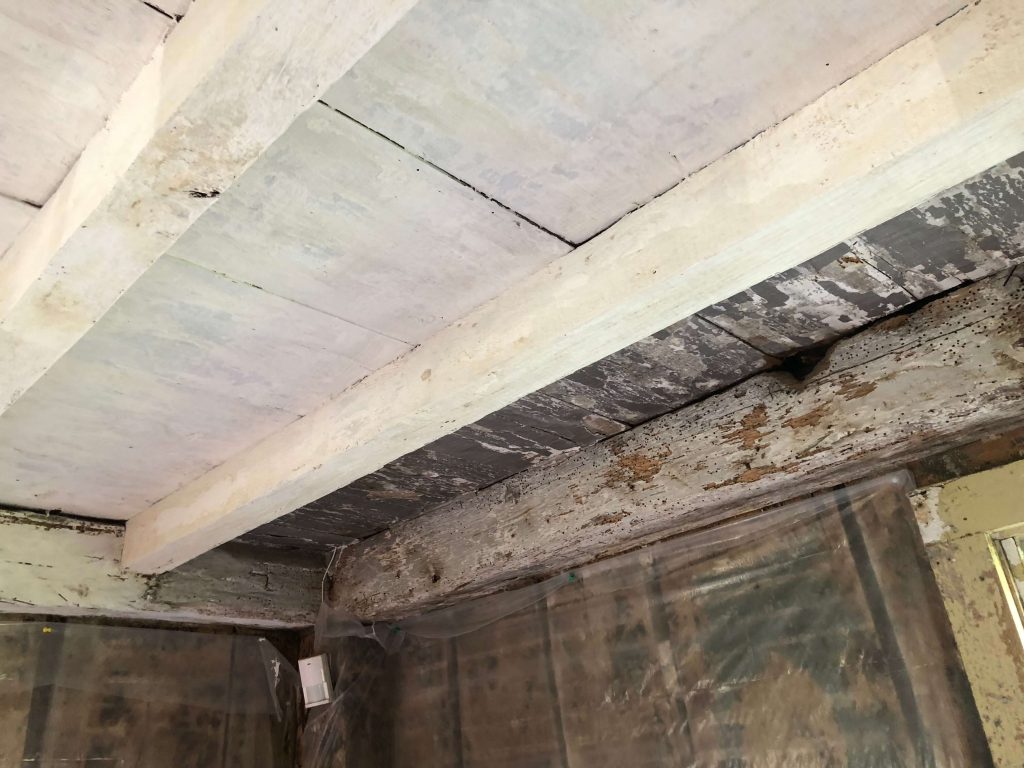 Newly stabilized and white-washed ceiling with one bay adjacent to the plat, cleaned left intact. West side of sitting room.

After a preliminary meeting with Studio TKM Associates, the onsite conservation treatment is scheduled to begin by late November / early December.

The conditions found according to the proposal’s description is as follows:

“Two distinct layers of wallpaper adhered directly to wide plank interior and exterior walls have been recently revealed [August 2017] following the removal of wall paneling [2005] and the plaster & lath covering. The wallpaper remains in fragmented sections and a printed text interlayer is visible where the uppermost wallpaper is missing.  The fragmentary sections of wallpaper appear damaged from prolonged exposure to moisture, rom the application an subsequent removal of covering layers and from extensive damage from silverfish feeding on the cellulose and starch of wallpaper.”

Analysis and documentation will follow with a comprehensive research, age and conditions reports for education purposes and to share with the public.

If Walls Could Talk: A Review of Existing Conditions 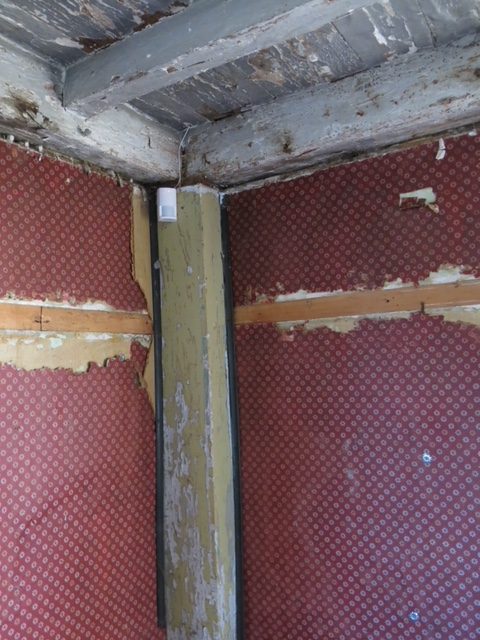 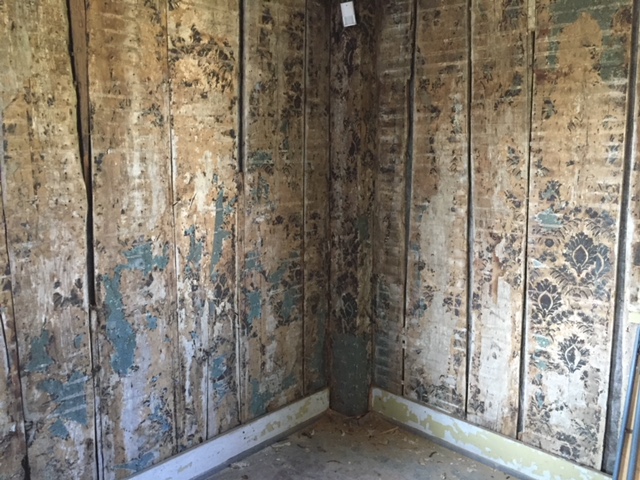 A corner view of the sitting room, showing the early decorative wall panels when revealed in August 2017. 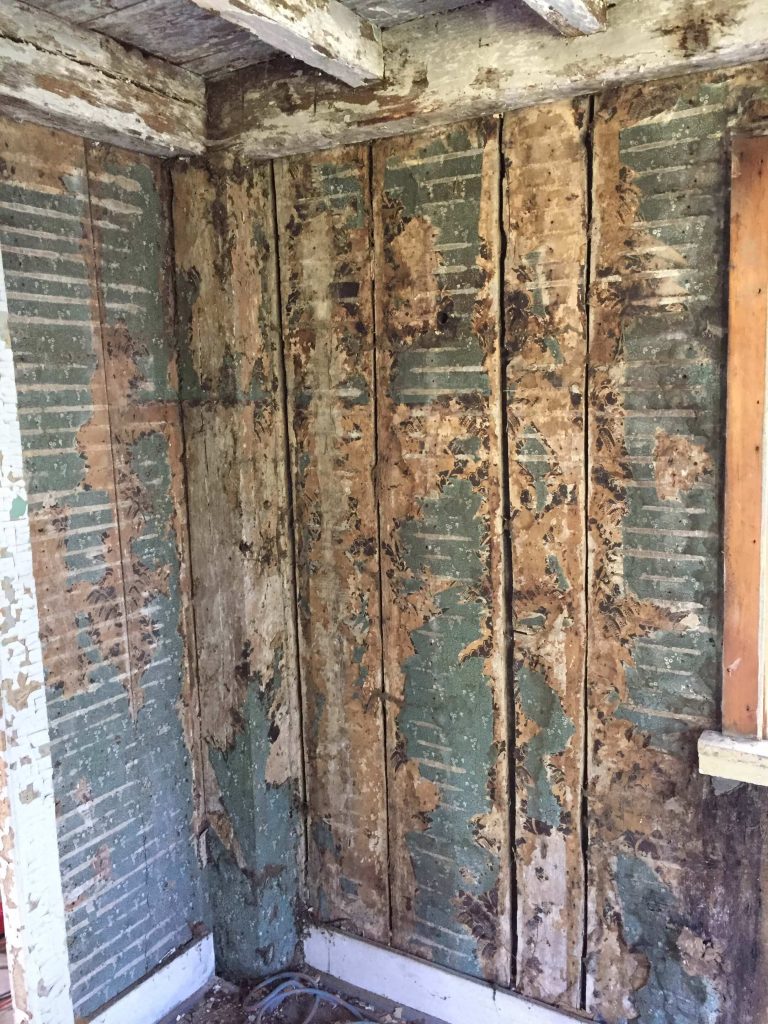 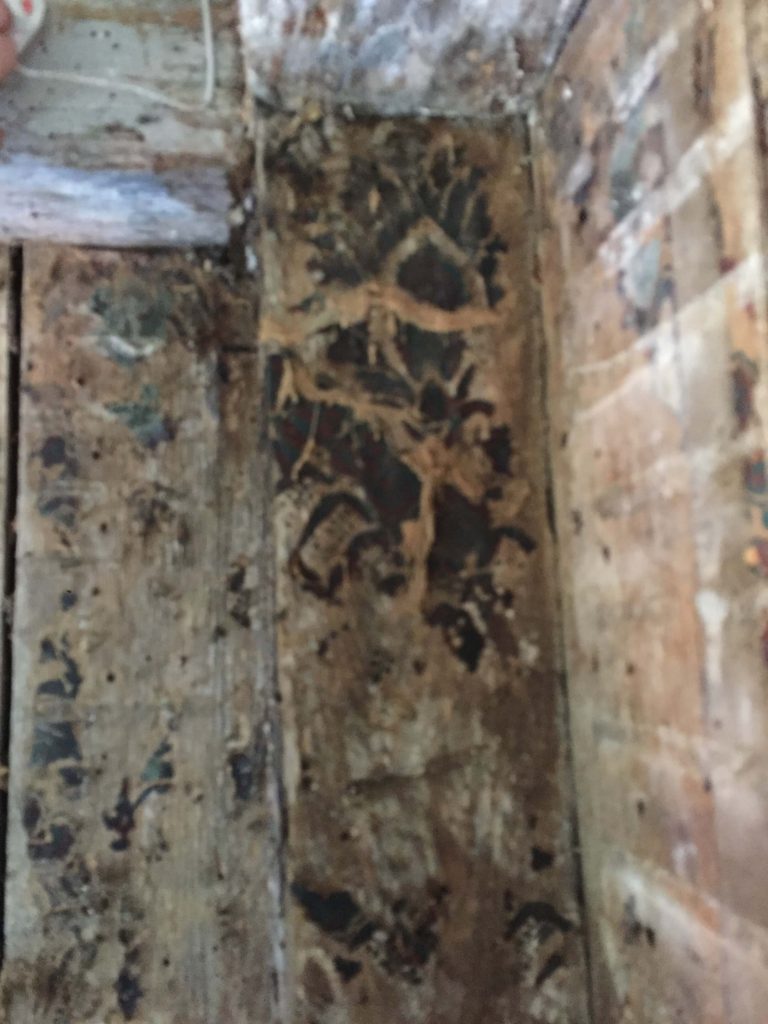 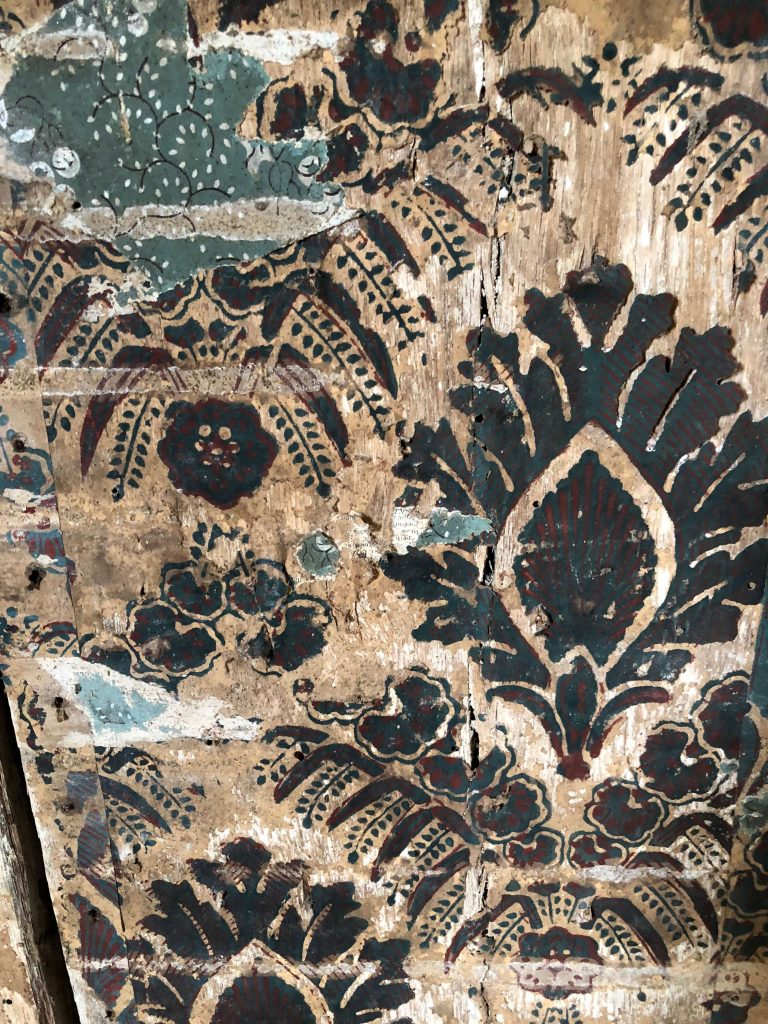 Close-up of the palmette or palmetto style, darkened over the centuries. 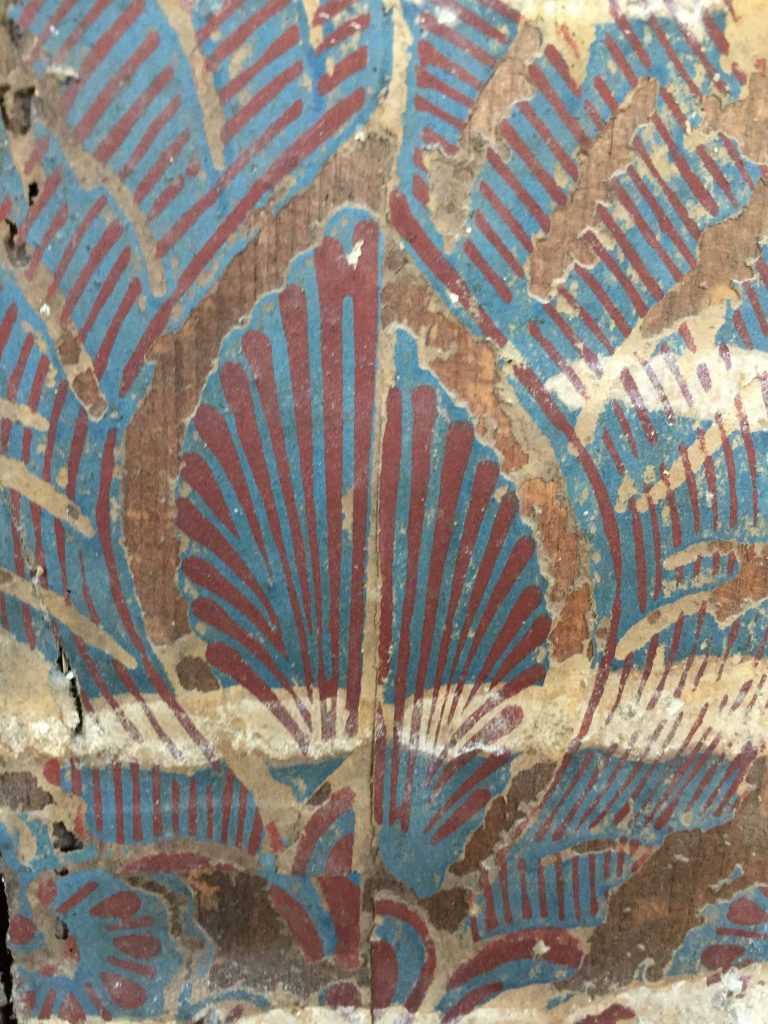 In another section of the room, we see another example of the palmette style, better preserved on an interior wall. 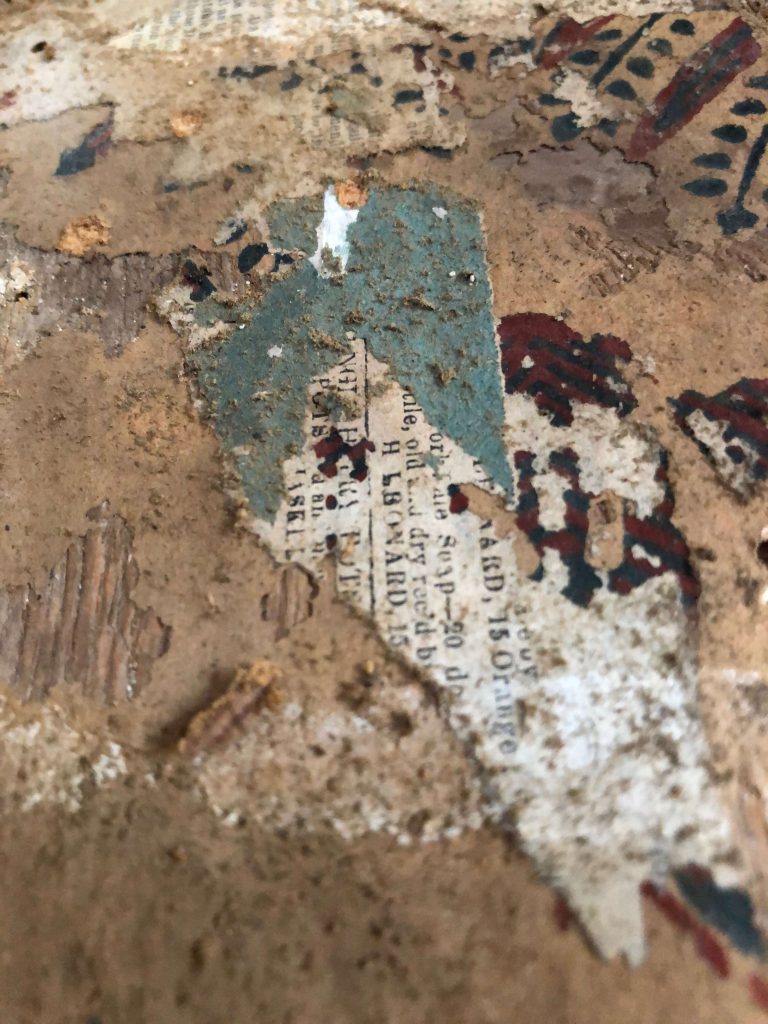 Palmette style wall covering appears to be the first layer, covered by newsprint, then another green wall covering of a different style. 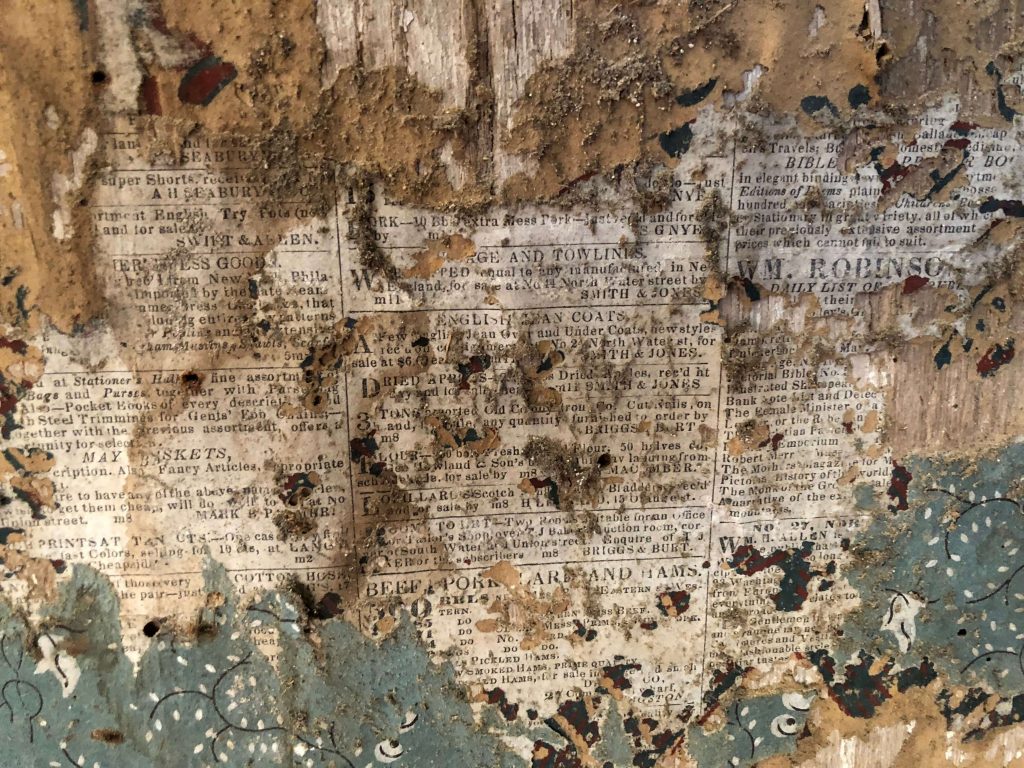 Another example of newsprint. 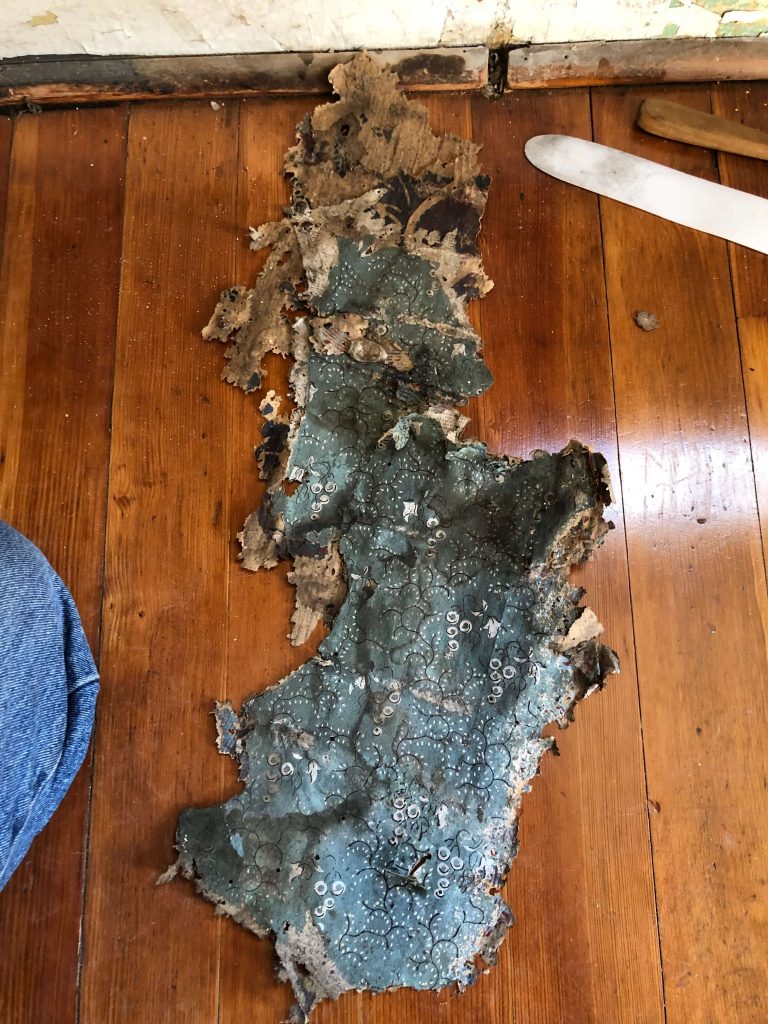 This sample was removed and taken to Studio TKM for on-site analysis. 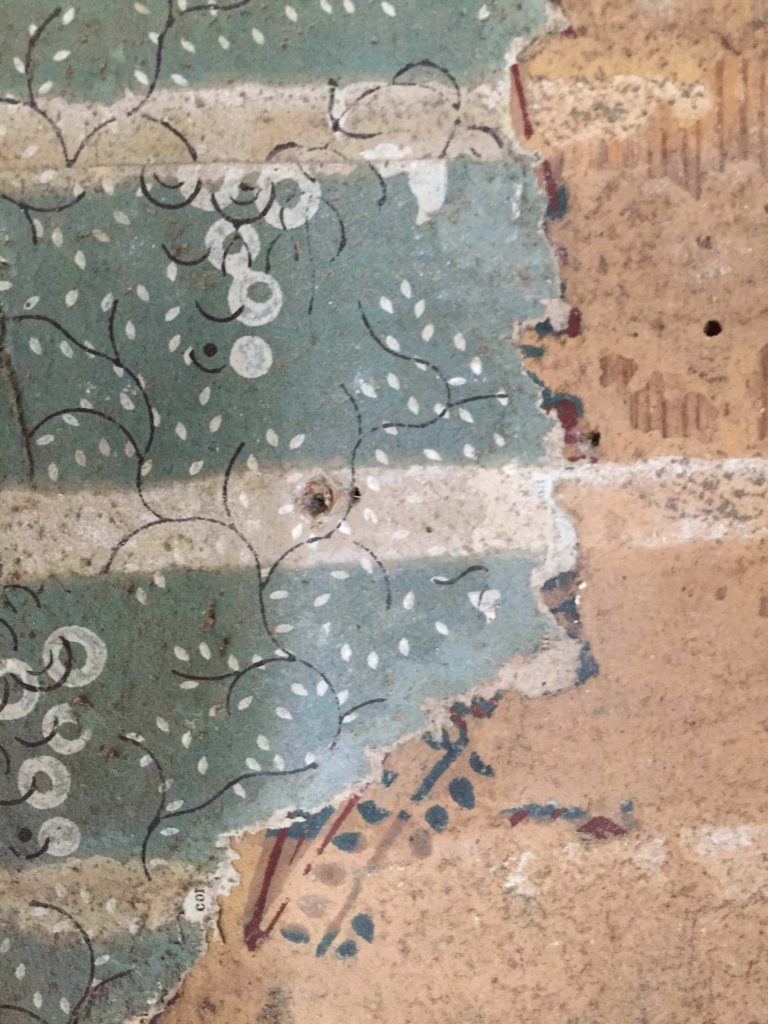 This early wallpaper is equally fascinating although not the first layer applied in this room. 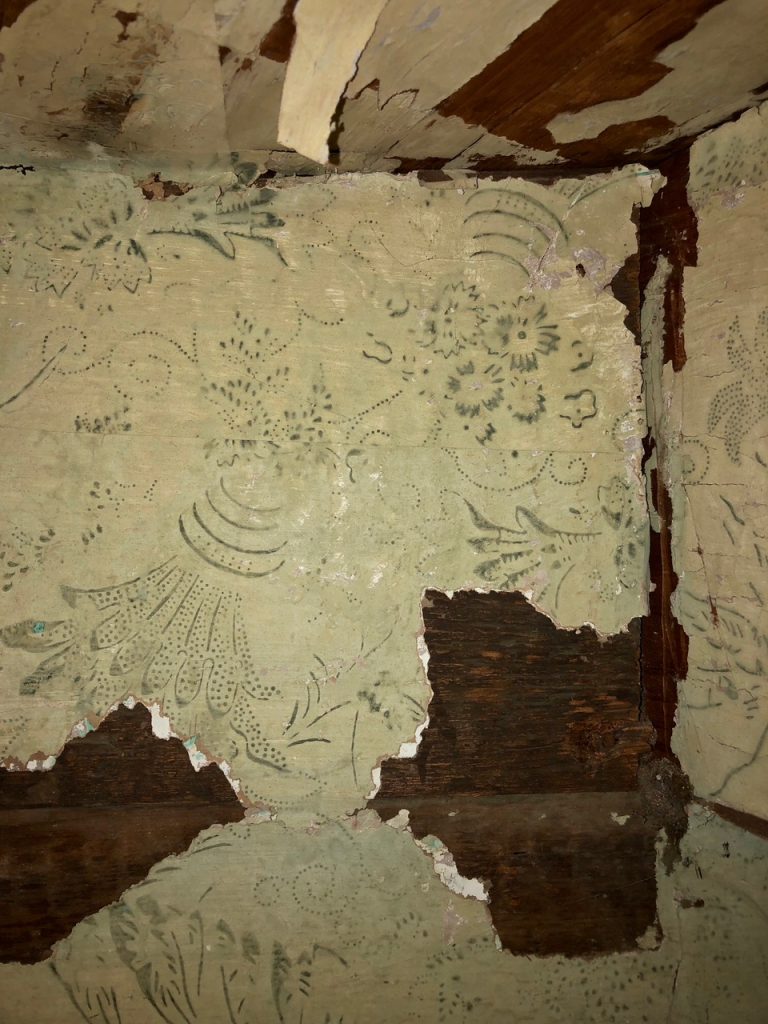 Wallpaper applied on back of stairs seen in the cupboard of the sitting room, left side above the mantel. This wallpaper was applied much later, mid-19th century. 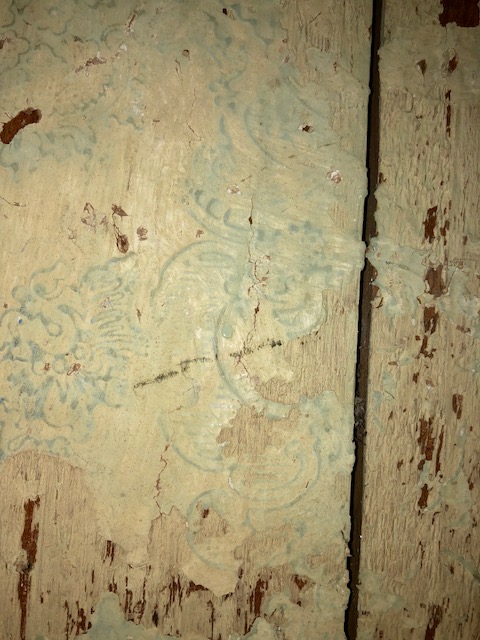 The Significance of the Sitting Room to the Visiting Public: Unique, Rare, Special to our Community

Stay tuned for progress reports about this interior conservation project.

What do we hope to achieve?

Simply put, the result of our upcoming conservation efforts in this one special room will be a protected exhibit space within the 1762 Akin House, one of Dartmouth’s more significant historic resources. The surprising discovery of extant & delicate decorative finishes on top of original whitewash inspired DHPT to alter its restoration strategy for this room. “The little house with a big story to tell” informed a special conservation approach to treat this room differently from the rest of the house where traffic & 21st C. wear & tear can be safeguarded. In addition to the general public, this room will attract preservationists & the academic community.

Integral to DHPT’s overall strategy to maximize the educational experience of the site, the Akin House will serve as a living history classroom telling particular stories of the mid-18th to early 19th C.­––most important, its place during Dartmouth’s Revolutionary War era when namesake Elihu Akin (1720-1794) switched alliances from the Crown to the cause of the Sons of Liberty. The sitting room and the formal parlor are examples of the style and tastes of the late 18th C., before and after British rule. In September 1778, Akin, a wealthy merchant inhabiting the Colonies, presumably lost everything when his property was destroyed by Loyalists and the British. In November 1778, he moved to this homestead which he purchased in 1769 and lived with his wife and family until his death. Elihu Akin may well have brought a sensibility of his former wealthy lifestyle to the homestead. His descendants inhabited or leased the house until 2003.

This entry was posted in News.

« The Last Muster Project: Save the Date
A Short History of the Akins, Quakers and Slavery in Old Dartmouth »
View more posts from this author