Peel Away the Layers to Reveal the Shadows of History

Phase III restoration of the 1762 Akin House has begun with a detailed examination of each room and the removal of centuries of layers (plaster, lath, 19th/20th C wall boards, wallpaper of different periods) to expose the original features.

“This little house with a big story to tell”

This little house is sharing its history and the culture of its inhabitants in ways we could not have imagined. Let us introduce you to the small parlor, first examined in 2003 with its circa 1960s paneling and boarded fireplace.  We are sharing for the first time the wonders of this room as it might have been in the 18th C or early 19th C, the wide pine boards and unusual wall coverings–no insulation, just the fireplace for warmth.   We are in touch with historic house experts to help us better understand this house, its early architecture, its decorative finishes, and repairs over 250 plus years.  Stay tuned for more images and information as our research and documentation unfold. 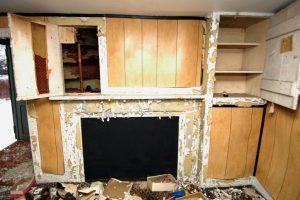 The ubiquitous veneer wood paneling so popular in the 1960s & 70s. Found throughout the house. Turns out to be an acceptable preservation tool to protect what’s underneath. 2003. 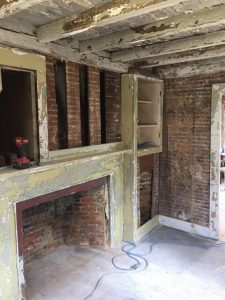 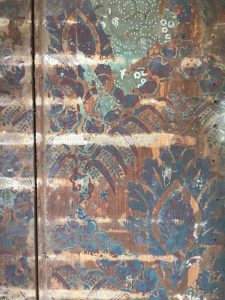 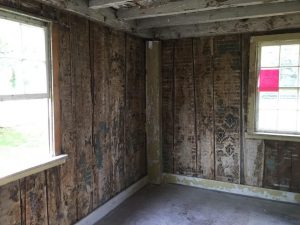 Left: after all materials removed, the earlier features are visible such as the Greek Revival style fireplace and mantel flanked by two cabinets. Ceiling before it was stabilized and whitewash applied. Above: view of the exposed walls of paper layers. Fall 2017. 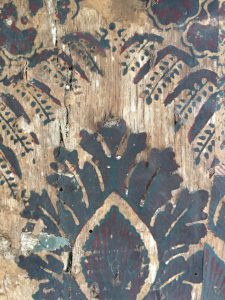 Right image: Close-up view of the wall covering, a pattern repeated throughout this room.

END_OF_DOCUMENT_TOKEN_TO_BE_REPLACED

In 2015, DHPT was awarded Dartmouth Community Preservation Act (CPA) funds for Phase III restoration at our 1762 Akin House at 762 Dartmouth Street. We recently hired preservation contractor, Tom Figueiredo, of Marion, to do this important job. Tom has been working non-stop on site since August 7, 2017. We are pleased and fortunate to have Tom as our partner in preservation.  His services and expertise was well worth the wait while he was working on another CPA restoration project in Mattapoisett, MA.

To learn more about Tom and his company, visit http://figbuilders.com. Be sure to check out the website blog to learn about the recently completed restoration of the ca. 1827 Mattapoisett Meeting House to get a first-hand look at the quality craftsmanship, care and attention to detail that Tom and his team bring to any historic preservation project.

END_OF_DOCUMENT_TOKEN_TO_BE_REPLACED

Henry Worth and the History of the Akins in old Dartmouth

Henry Barnard Worth (1858-1923), a local historian living in New Bedford, was active in the first quarter of the twentieth century. He was a member and officer of the Old Dartmouth Historical Society [New Bedford Whaling Museum] from its inception, and was the author of more than twenty essays published as Old Dartmouth Sketches. His best-known work, in collaboration with photographer Fred Palmer, documented in text and photos some of the oldest houses in our area.

Worth also lectured frequently, both in the local area and further afield. Worth’s papers are archived in the New Bedford Whaling Museum Research Library.

Why are Worth’s writings important to the history of the Akin family? He wrote extensively about the Akins and their connection to old Dartmouth. He is a “go-to” historian for researchers, even today.

The Akins feature prominently along with other early founders in Worth’s comprehensive narrative about Padanaram Village in south Dartmouth.

END_OF_DOCUMENT_TOKEN_TO_BE_REPLACED

In 1921, the Akin House becomes a part of film history as a location for Elmer Clifton’􀁠s Down to the Sea in Ships.

These still photos provide a record of the east side of the Akin House, called the “Old Homestead”, and appears in a late sequence of the film.

Down to the Sea in Ships was Clara Bow’􀁠s first released film and also depicts Dartmouth’􀁠s Apponagansett Meeting House.

It contains rare footage of a whaling voyage filmed on the Wanderer and the Charles W. Morgan.

This film about New Bedford whaling had its premiere at the Olympia Theatre on September 25, 1922. The whaling footage is considered the best ever filmed and among the rarest.

END_OF_DOCUMENT_TOKEN_TO_BE_REPLACED

A Brief History of the Dartmouth Akins and the Akin “Farmstead”

For a brief chronology of the Akins at pivotal moments in our history, read on.

END_OF_DOCUMENT_TOKEN_TO_BE_REPLACED

The Akins and Their Holdings In and Around Padanaram Village

END_OF_DOCUMENT_TOKEN_TO_BE_REPLACED

The Akin House Property in the Context of South Dartmouth

For those of you who are interested in local history and the origins of the 1762 Akin House on the corner of Dartmouth and Rockland Streets, this link is for you.

The proximity of this south Dartmouth property to Padanaram Harbor [formerly known as Akin’s Landing] underscores the entrepreneurial spirit of the Akins of old Dartmouth.

END_OF_DOCUMENT_TOKEN_TO_BE_REPLACED

After arriving at 1pm and decorating “treasure chest” bags for the goodies they were about to find, kids had a chance to try the game of Graces- a popular 19th century children’s pastime.

As the Treasure Hunt began, kids took turns reading clues and following a treasure map around the Akin property to find hidden boxes of prizes. Each prize correlated to the piece of history Bob Barboza would then present in a set of “mini-talks” about the 1762 house at each prize location. Children were taught about some of the key facets of the Akin family history including the house’s age and Mr. Akin’s profession as a shipbuilder.

After finishing the clues, kids were invited on a tour of the Akin house, led by historian Peggi Medeiros.

The last activity of the afternoon consisted of attaching a few charms found during the hunt to bracelets and bookmarks to take home and remember their day.

To read more and see several pictures taken by Seth Thomas of Dartmouth Week, check out the article posted HERE!

THANK YOU to everyone who came out to the event, and our trusty board members and volunteers for the time and effort put into the whole day!!

END_OF_DOCUMENT_TOKEN_TO_BE_REPLACED

Today’s the day! DARTMOUTH TOWN MEETING is in order and funding for the Akin House project will get it’s final vote!

We believe with this final phase of the Akin House project DHPT will be able to finalize restoration on the house and start our programing agenda as an educational heritage facility. Dartmouth is privileged to possess a historic home such as this one, and with this last funding requested, DHPT will be able to ensure that the Akin House is preserved for many generations to come.

For more information on our vision for the project see HERE.

For more on the history of the Elihu Akin House HERE.

THANK YOU, Dartmouth community, for your support, and Town Meeting members for your vote!!

END_OF_DOCUMENT_TOKEN_TO_BE_REPLACED 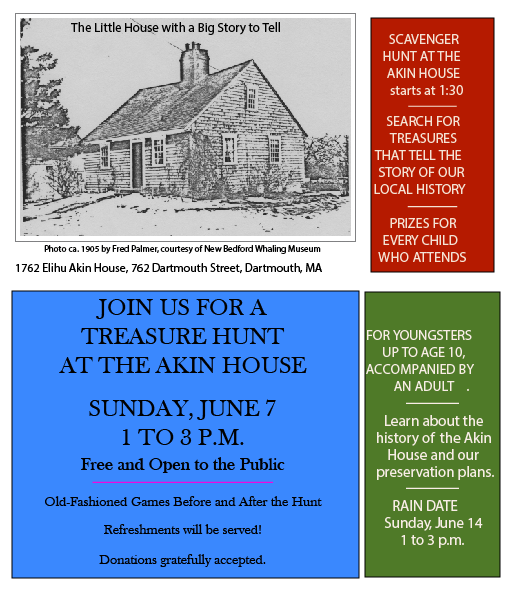 On JUNE 7 , DHPT will be hosting our first ever KIDS EVENT!

Children 10 and under are invited to a TREASURE HUNT to be held on the Elihu Akin House property! From 1-3pm, kids will participate in old-fashioned games and learn about their community’s heritage while hunting around the property for prizes! Parents and children will have the opportunity to tour the 1762 house after the hunt. Event is free, donations gratefully accepted.

Treasure maps will be provided.

Hope to see you there!