Making Full Use of the Akin Property, A Work in Progress

A gateway property linking New Bedford to Padanaram Harbor, visitors are transported to old Dartmouth’s past on many levels––architectural, societal, cultural, archaeological, and economical perspectives––told through the lives of the Akin family.

“The little house with a  big story to tell.”

Architectural historian of this region, the late Anne W. “Pete” Baker, coined the phrase in 2004. Fifteen years later, even Pete would be amazed at how prescient she was. As the work progressed under the stewardship of DHPT, the house has revealed unimaginable surprises that no one at the time anticipated.

The stories are made tangible by the house itself and by interpretive living history programming, such as the event we held on June 23,  which many attended and is featured in a recent Blog.

While the 18th century Akins owned about 18-20 acres of land during their time, today’s property is only about a 3/4 acre. In the midst of a very busy intersection of modern houses, the Akin property highlights our local history, a rare sight in most of Dartmouth these days.

Time never stands still although it can be captured in a moment or through an event that inspires a look back to history. Yet a historic house lacks a sense of place without the knowledge of its inhabitants and without a relationship with the land surrounding it. That’s context.

So this year we have turned our attention to the landscape.

The land on which the house sits has been in need of attention for decades. The lawn fronting the Dartmouth Street location, more 20th century than 18th century, has served us well.  The house is set back against attractive greenery and trees, providing shade during summer months. (Near future: we will be designing a new sign and move it to another location.) 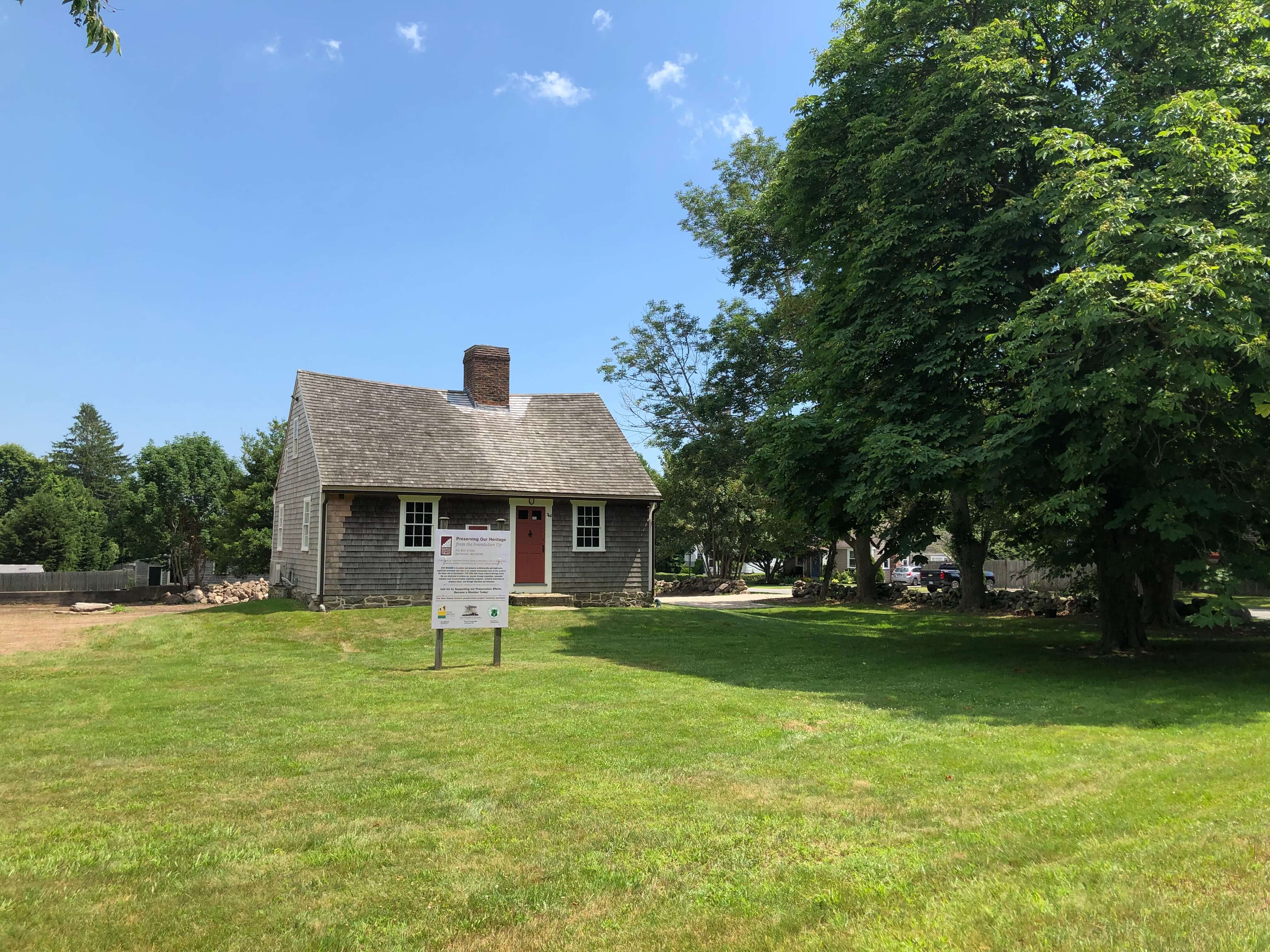 Thanks to our donors, we were financially positioned

to address the exterior landscape. 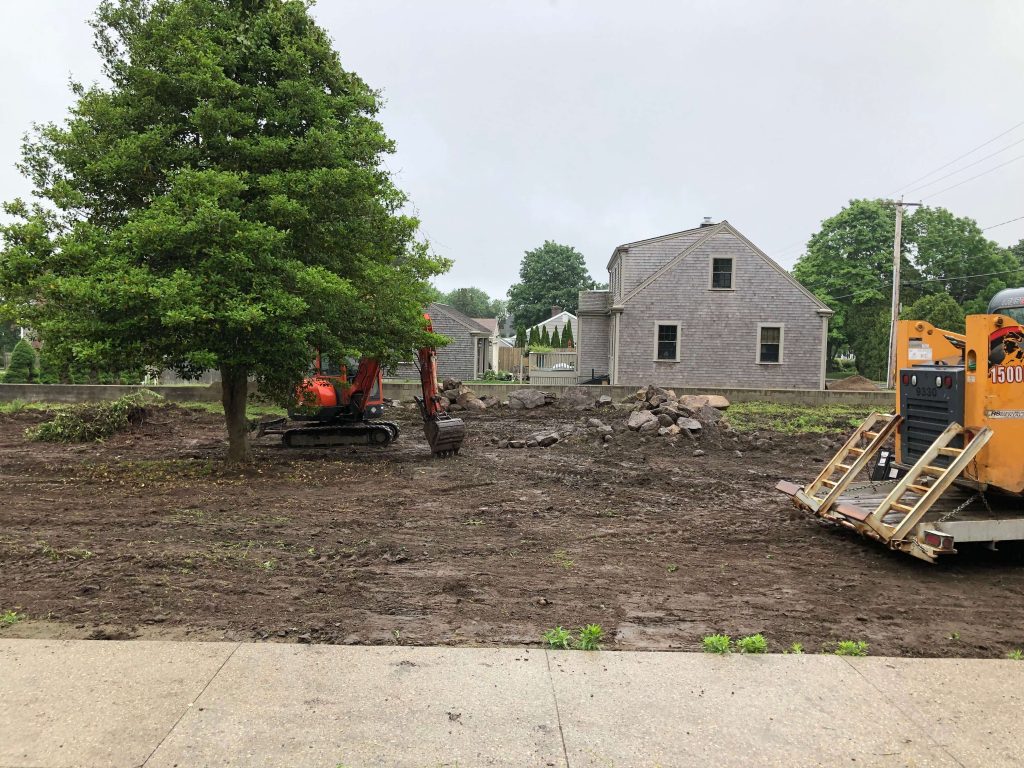 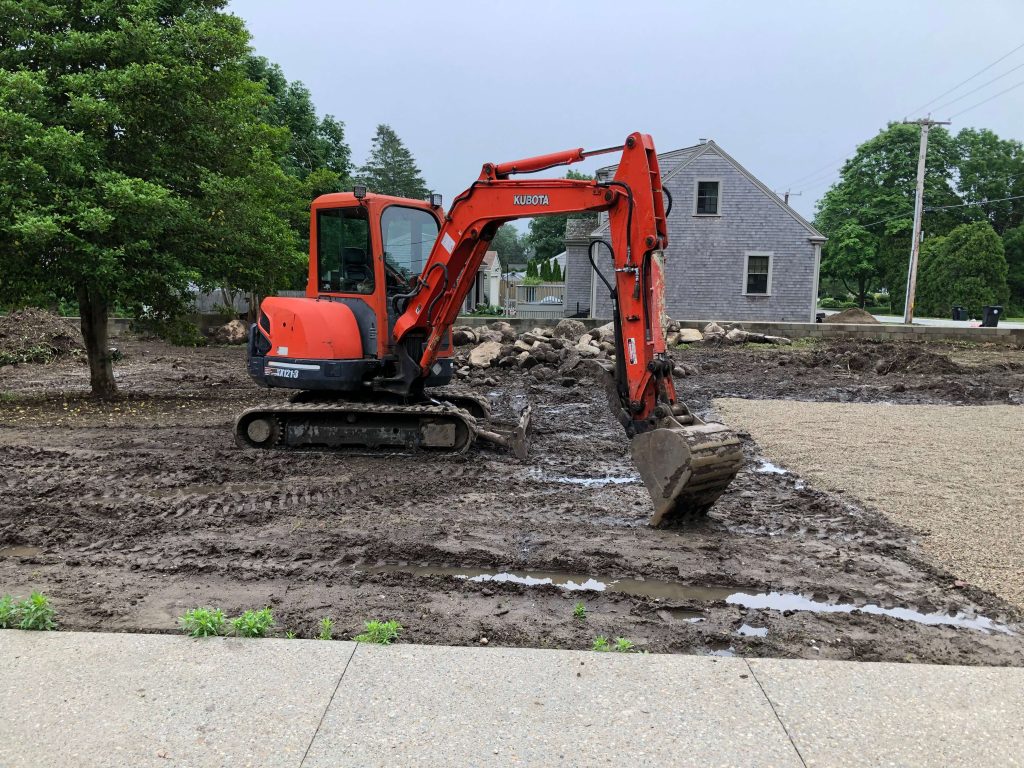 We needed to do more with the land

to maximize the property’s relevance and usefulness.

Many have seen some changes since May. Gone is the overgrowth, brush, non-native plants and vines, and unwanted saplings which invaded the property––a useless jungle preventing us from taking full advantage of this gorgeous property. Due to heavy downpours, the work has taken longer than expected but it is finally coming together. 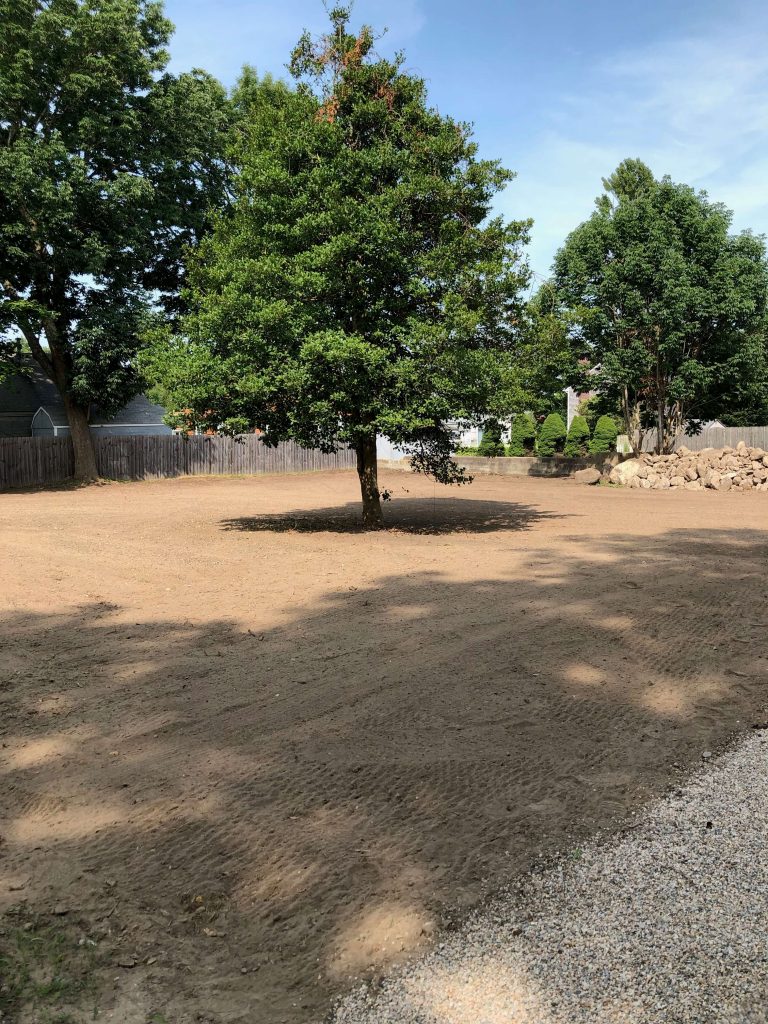 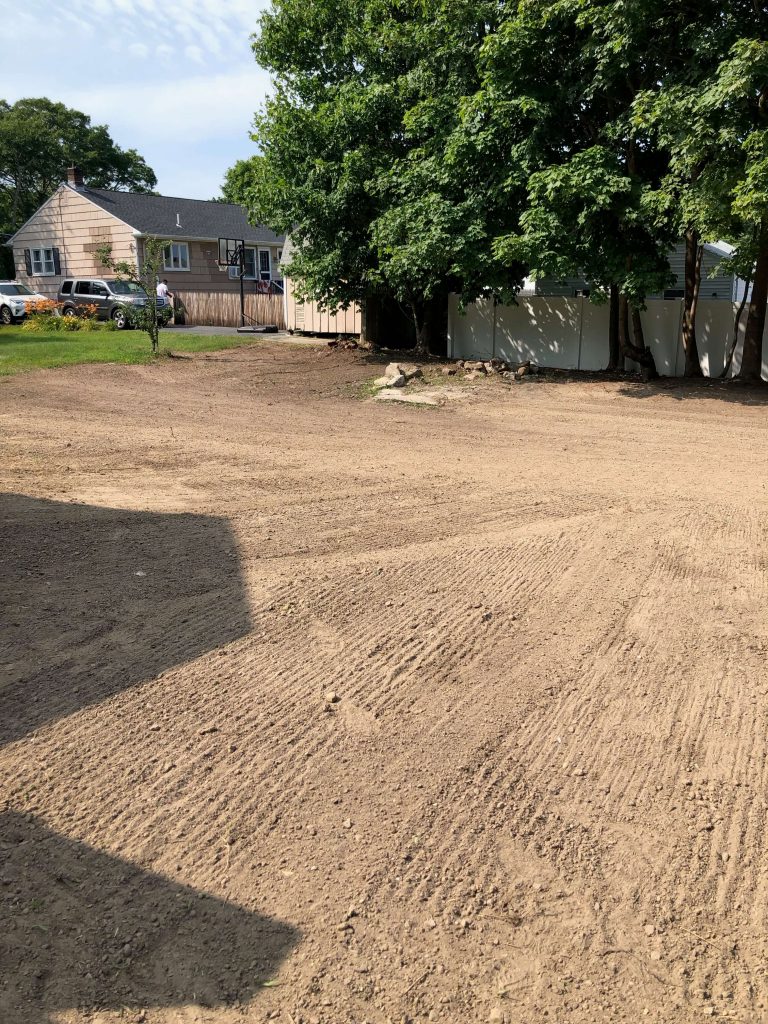 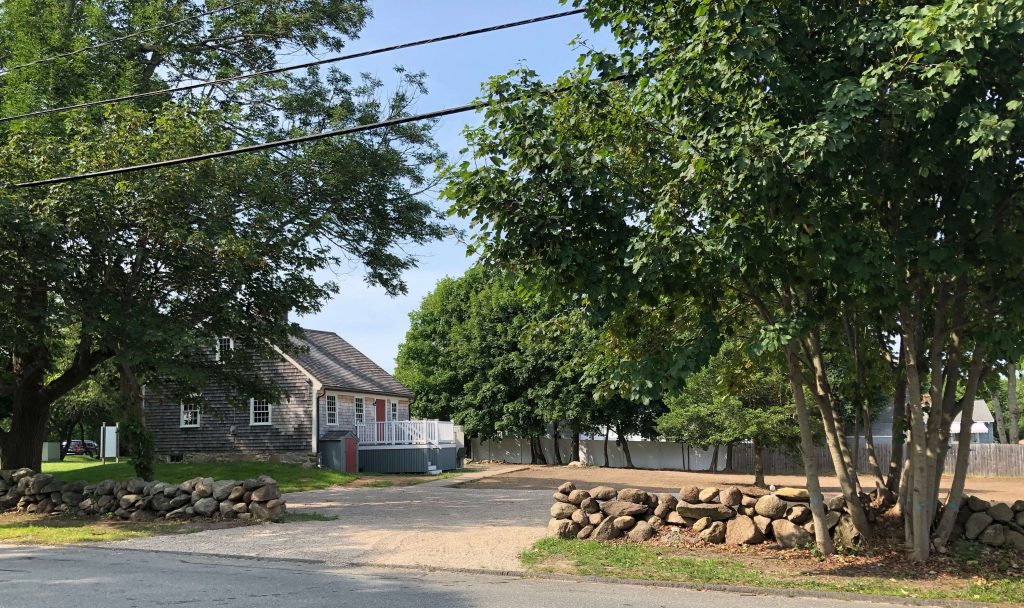 Above: The stone walls flank the entrance to the property. The driveway of small crushed stone adds a neat appearance. Right: View from grassy area showing the driveway with majestic holly tree in the background and a collection of stones of various sizes and shapes. 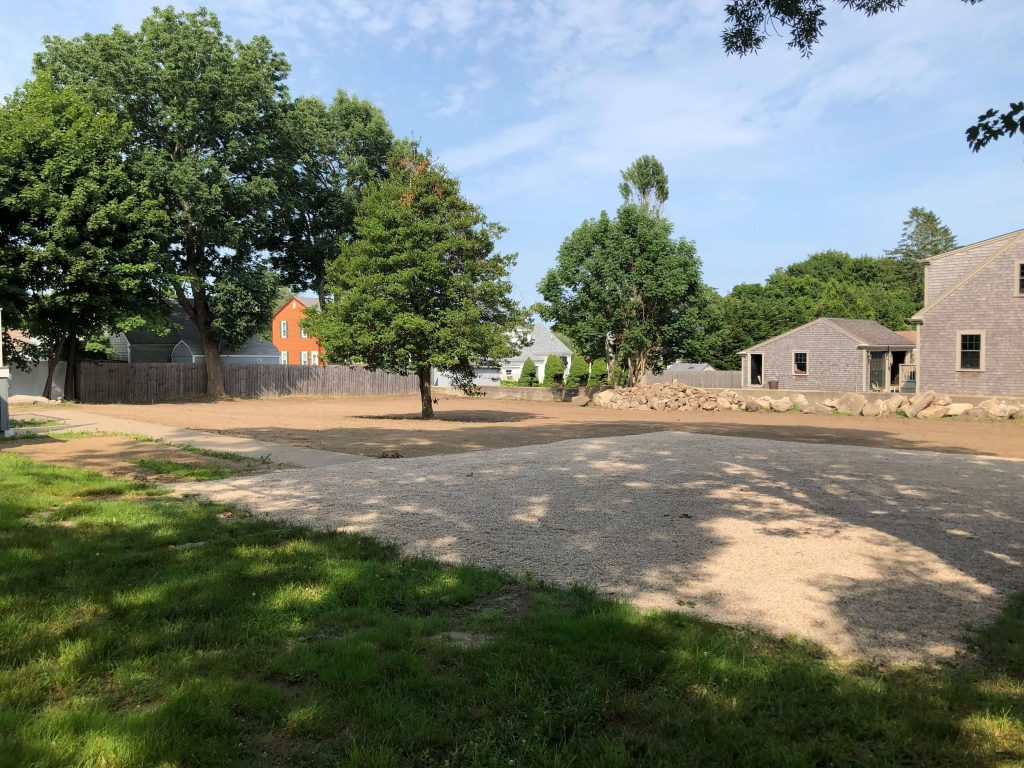 The plans for all this open space.

A lawn.  Yes, more lawn. Not 18th century but the best approach to lay the ground work for future use as a heritage landscape. The benefits of this will be to prevent the return of invasives and unwanted vegetation. This will require regular maintenance of mowing to keep the land under control. We have identified our special holly tree as a landmark of demarkation.  The grassy areas near the driveway and to the right of the holly tree will offer more green space for events. Our plans also include a heritage garden and an 18th century orchard to the left of the holly tree, much like what the Akins would have had but on a smaller scale.

Requiring some design work, the stones found on the property will be used as landscape features and stepping stones to add interest and historic character. A few will be repurposed as benches.

What’s below ground is just as important as what’s above.

The Akin property has been all about revelation and discovery. To this day, we continue to uncover  significant archaeological artifacts.

During the archaeology field work conducted in the summer of 2009, evidence of a barn and a well came to light. Over ten years of unmitigated growth and change, these finds went back underground. 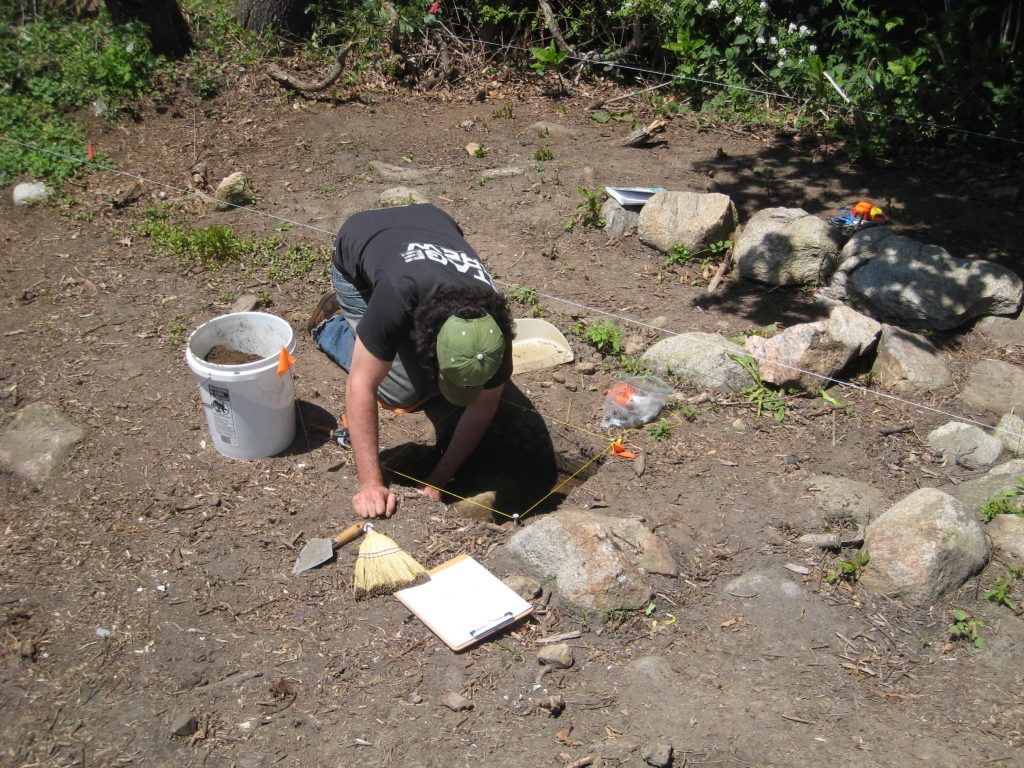 The discovery of a foundation, presumed to be the barn which was demolished after 1922. 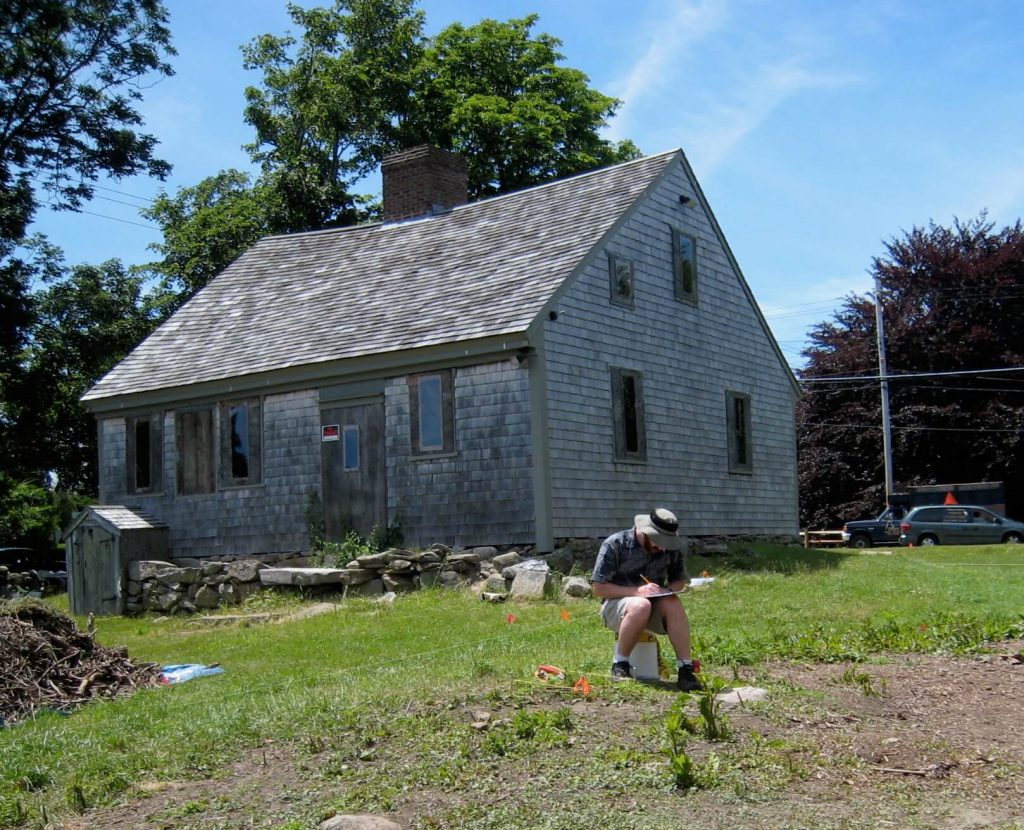 Excavating close to the area of the well. 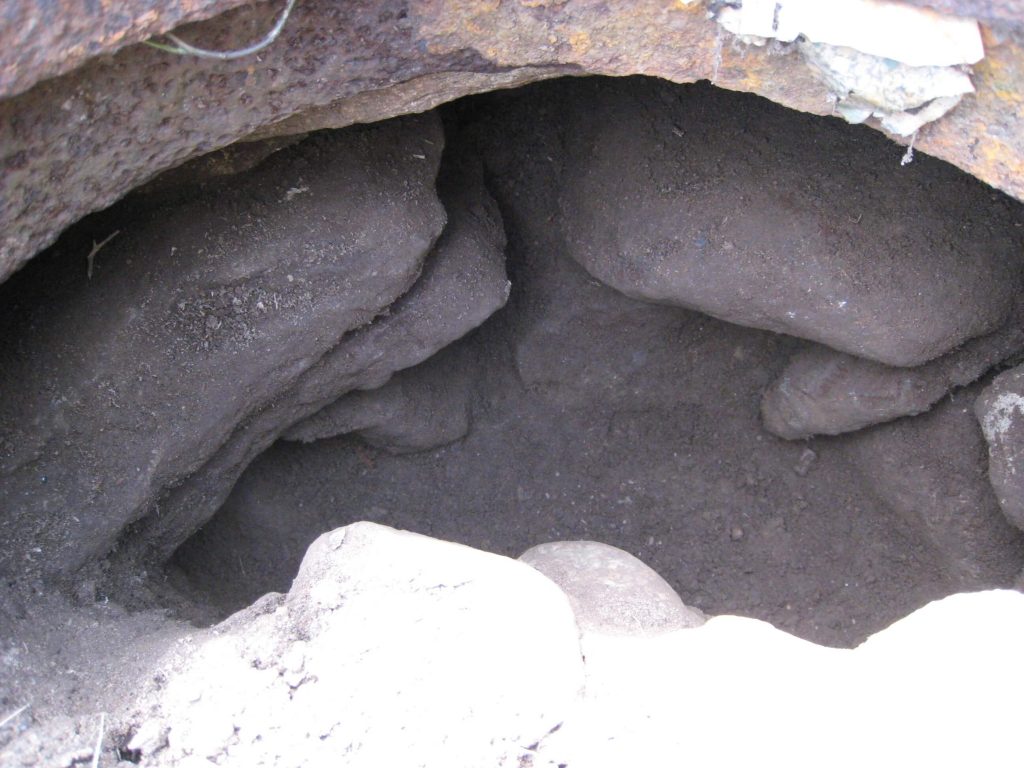 Surrounded by what looked to be the exterior of a manhole cover, this photo offers a brief glimpse of the well which after documentation was refilled with dirt, sand and stones, and then camouflaged.

Hidden in plain sight for years, a well with a distinctive well cap and a path leading to the house was excavated. So far the date of the well taken out of commission remains unknown to us but with research, more will be revealed. 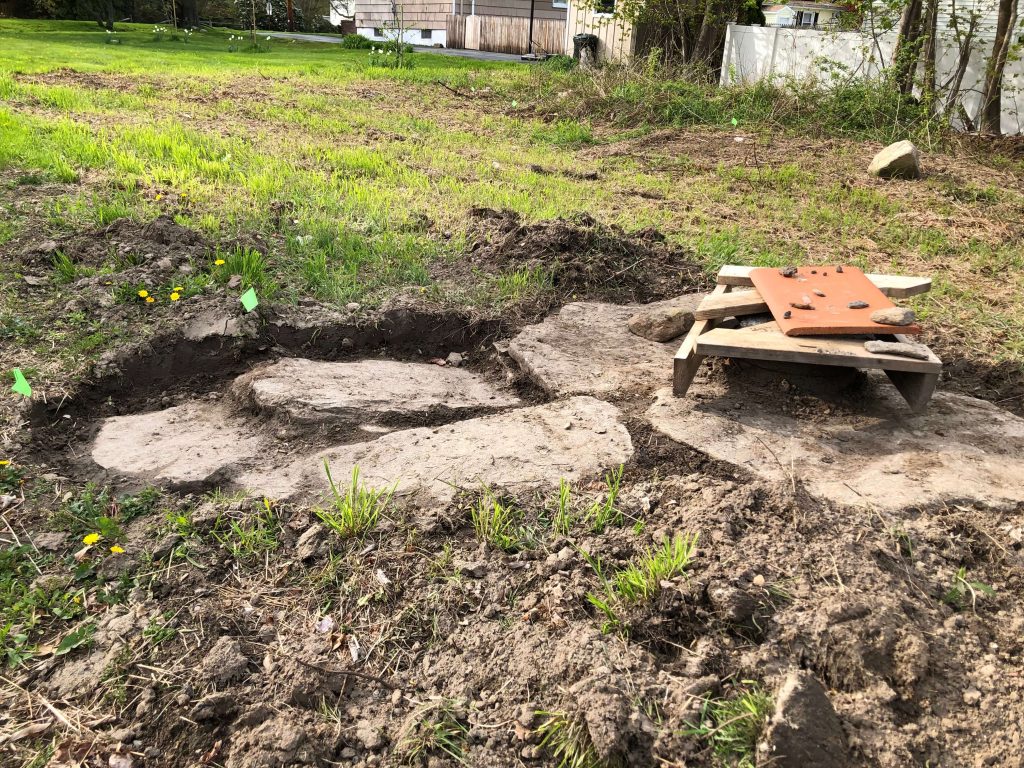 Stepping stones from the well, protected by a well cap in two pieces, forms a path to the house. To the right, a large stone placed on top of the well with the stepping stones partially covered for safety. 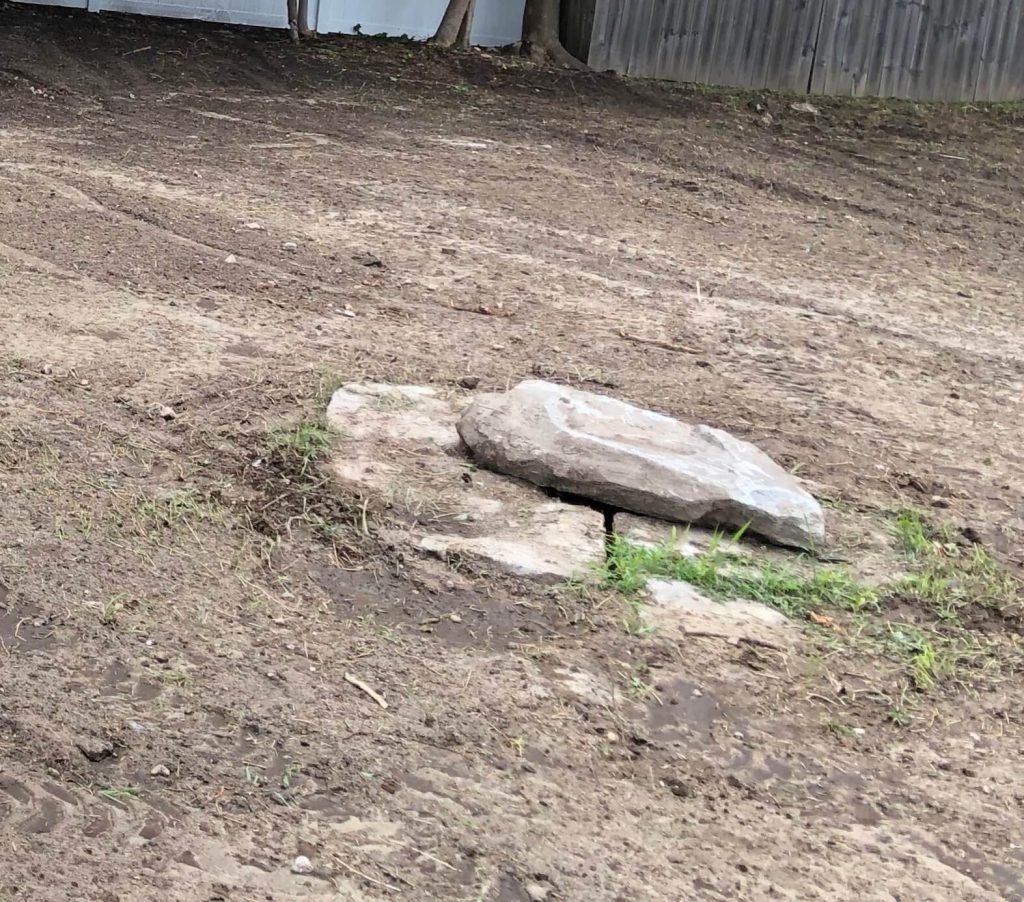 The barn’s structural foundation reappeared along with an adjacent section of another foundation. 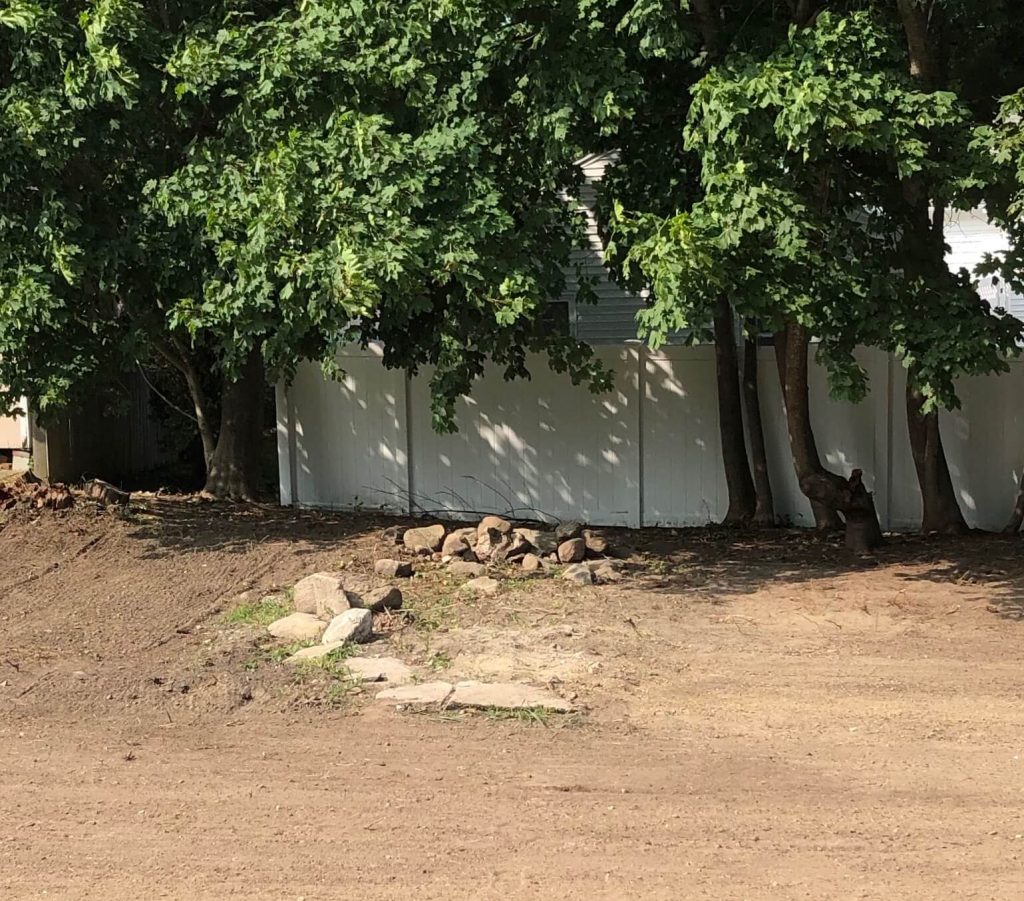 Area showing an array stones of what is believed to be a part of the barn foundation first excavated in 2009. 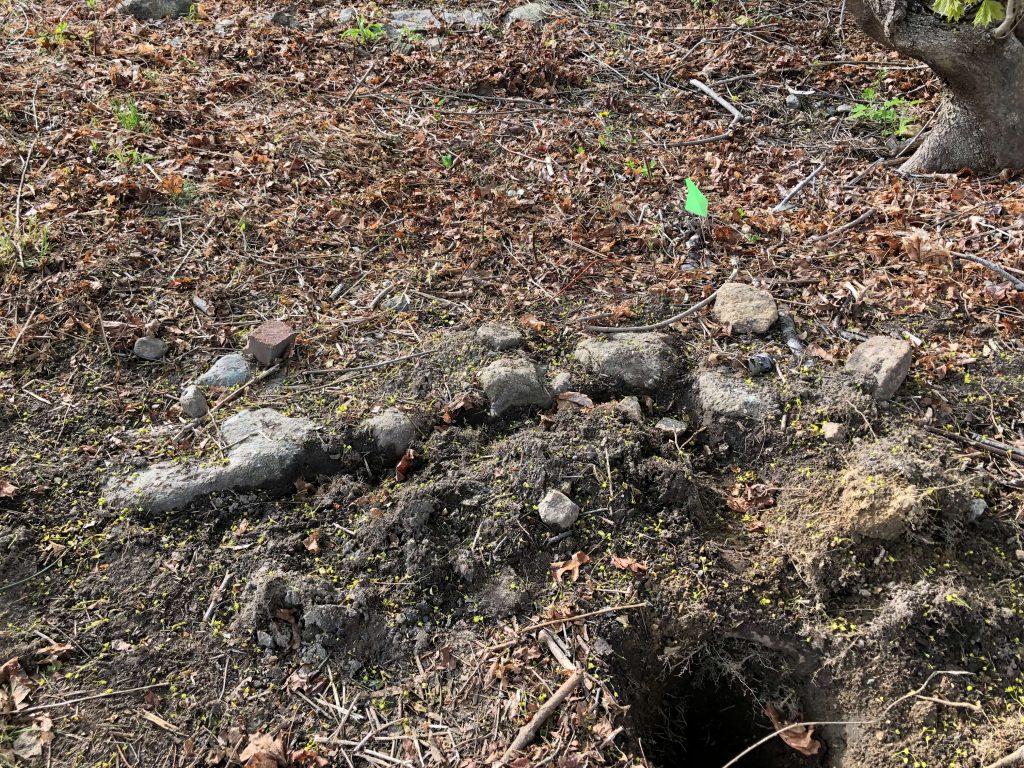 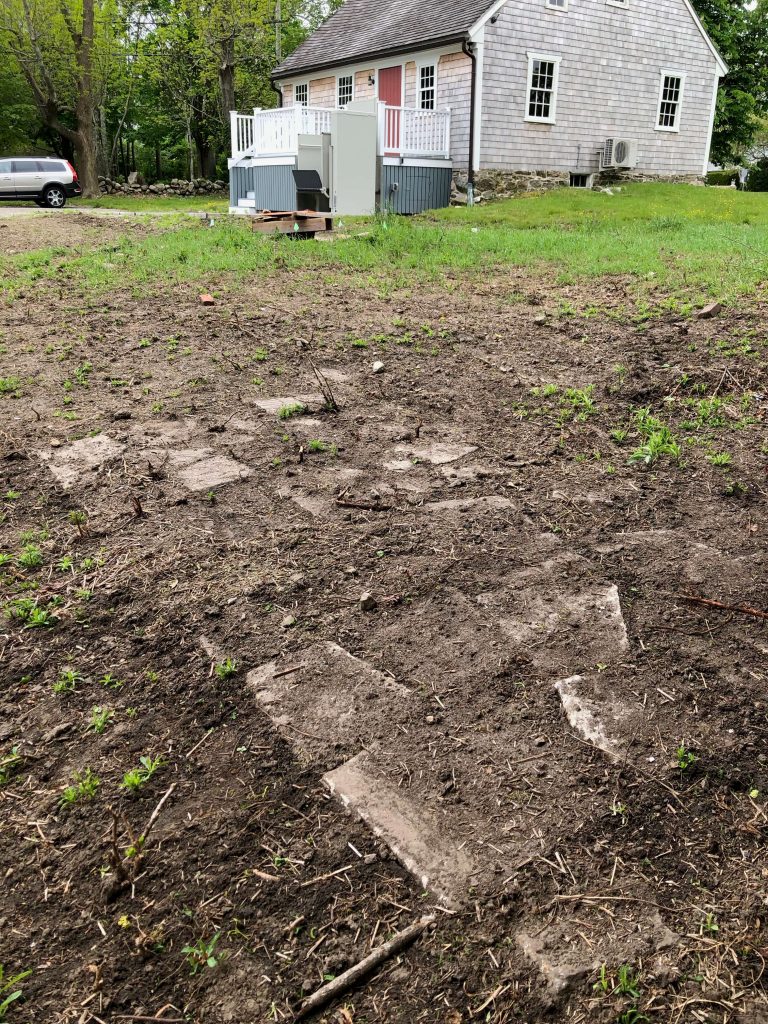 These areas of interest will remain exposed for further archaeological study and dating. If anyone is curious, the privy has yet to be found. Theories abound.

As stated above, we are grateful to our generous donors who answered the call during our last appeal. Contributions enabled us to address the exterior landscape as stated in our goals for 2019. We funded the landscaping work shown here, up to seeding the land for grass, which is scheduled for the week of July 15.

We respectfully ask for additional contributions to support the new design, operational and maintenance expenses at the Akin property to leverage the progress we’ve made so far.

You helped us achieve our mission that the Akin property become a study house and a cultural heritage center.  Now, we have reached the stage where investment in the property is of utmost importance to carry our mission forward.

To that end, DHPT is introducing a Mid-Summer fundraiser in the form of a Challenge Grant.

Won’t you donate today? All donations are tax-exempt to the extent allowed by applicable laws.

This entry was posted in Akin House, Education.