The Mystery Behind the Early Wallpaper in the Sitting Room: Part 1

The above image was photographed in 2003 showing the sitting room as found during the examination process of saving this house.

Please note that this article is in two parts. This is Part 1.

It’s always important to provide context when discussing historical subjects and objects. In this case, our subject is antique wallpaper, and to we contemporary folk historic and worth studying.  Used as an important feature to enhance the walls of a room, it can transform a drab and uninteresting space to a decorative marvel. Wall coverings capture a realism of a past societies and their homemaking cultures.

We are fascinated by the history of wallpaper, especially all wall coverings prior to the 20th century. The wallpaper we found at the 1762 Akin House has engendered a great deal of curiosity.

When were wall coverings applied over the whitewashed boards in the sitting room? Soon after occupancy, several years or decades later?

[Please refer to other articles about wallpaper in our 2017 archives. We will discuss the original features in other rooms and the lives of the inhabitants in later blogs.]

Just imagine the feeling of the rooms when Job Mosher and his wife Amie Akin (Elihu’s niece) moved into their brand new but modest house in 1762.  In that time, the pine and oak wall panels would have been whitewashed, applied for utilitarian purposes such as to deter vermin, and to brighten up the living spaces, especially at sunset when firelight and candlelight were the only sources of light. Perhaps sparsely furnished with braided rugs and homespun textiles covering the windows, these are likely the characteristics of the original home. We cannot know for certain what this young couple could afford  in creature comforts or how much help in the way of a dowry that Amie received.

Given its size, the sitting room or small parlor was probably used for intimate family gatherings. We can imagine life in the 18th-19th century in that room–a rocker, a candle stand, a bookcase or small desk with chair, and a couple of soft chairs over an area rug, a small pile of firewood in the corner. The fireplace would have generated some heat for warmth even in the uninsulated cold winters.

This use of this room by 20th century tenants also remains a mystery although our hope is that someone will come forward with photographs and anecdotes of life during those decades.

Why is the sitting room so important now?

During the initial stages of preservation and restoration planning, this room never held as much attention when compared to the rest of the house. The presence of ghosts was not as acutely felt. Equipped with a fireplace and cabinets on either side of the hearth, the room’s 20th century wallpaper was an attention-getting red pattern style that added a pleasant enhancement. This room didn’t show as much wear and tear as the other rooms. By that time, the fireplace was covered with board. During house tours, this room was filled with display tables for visitors; at other times, it was used for storage.

The images below show the room in the 21st century. 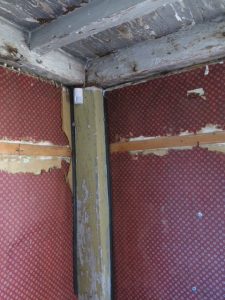 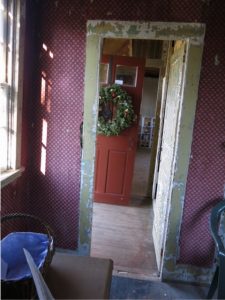 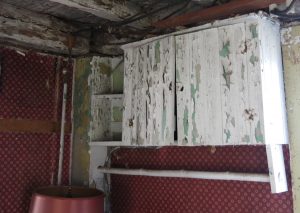 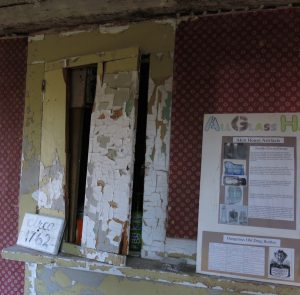 Cupboard above the hearth; stairs to second floor can be seen. The interior space is covered with wallpaper, another mystery to solve. 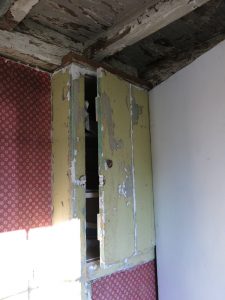 Cupboard to right of hearth. 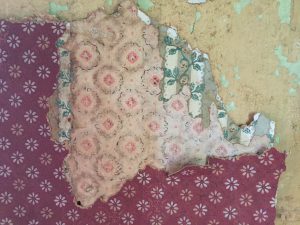 Beneath the red wallpaper, other layers were uncovered.

This summer, the preservation and restoration work required that we remove most of what is seen in the above photographs.

« The Mystery Behind the Early Wallpaper in the Sitting Room: Part 2
Whitewashing Practices when the Akin House was Built »
View more posts from this author