The Anatomy of an 18th Century House Center Chimney, Part 2.

A Tale of the Beehive Ovens

One of the most dazzling discoveries of the original fireplace was the wall oven, also known as a beehive oven due to its domed construction design. This oven was situated in the back of the firebox. We asked ourselves, how common was this?

According to Edward P. Friedland, author of Antique Houses, Their Construction and Restoration, Dutton Studio Books, 1990,  “Bake ovens of the earliest fireplaces appear in the rear wall of the firebox, a location that eventually shifted in the first quarter of the eighteenth century to the more convenient location at the side of the fireplace.”

This shift in practice from the rear to the side would be attributed to several reasons besides convenience, i.e., unintended consequences such as safety risks due to fire eruptions endangering persons and house. Inhabitants reaching inside with tools to place dutch ovens and other foodstuff containers in the rear oven could be awkward at best. The fireplaces were wide and deeply set to enable a full array of kitchen crockery in the oven and over the coals (to roast meats, heat kettles, etc.) but not without risk of injury or worse. According to Friedland, “Bake ovens were frequently rebuilt since constant use in the summer and winter burned out the brick.” 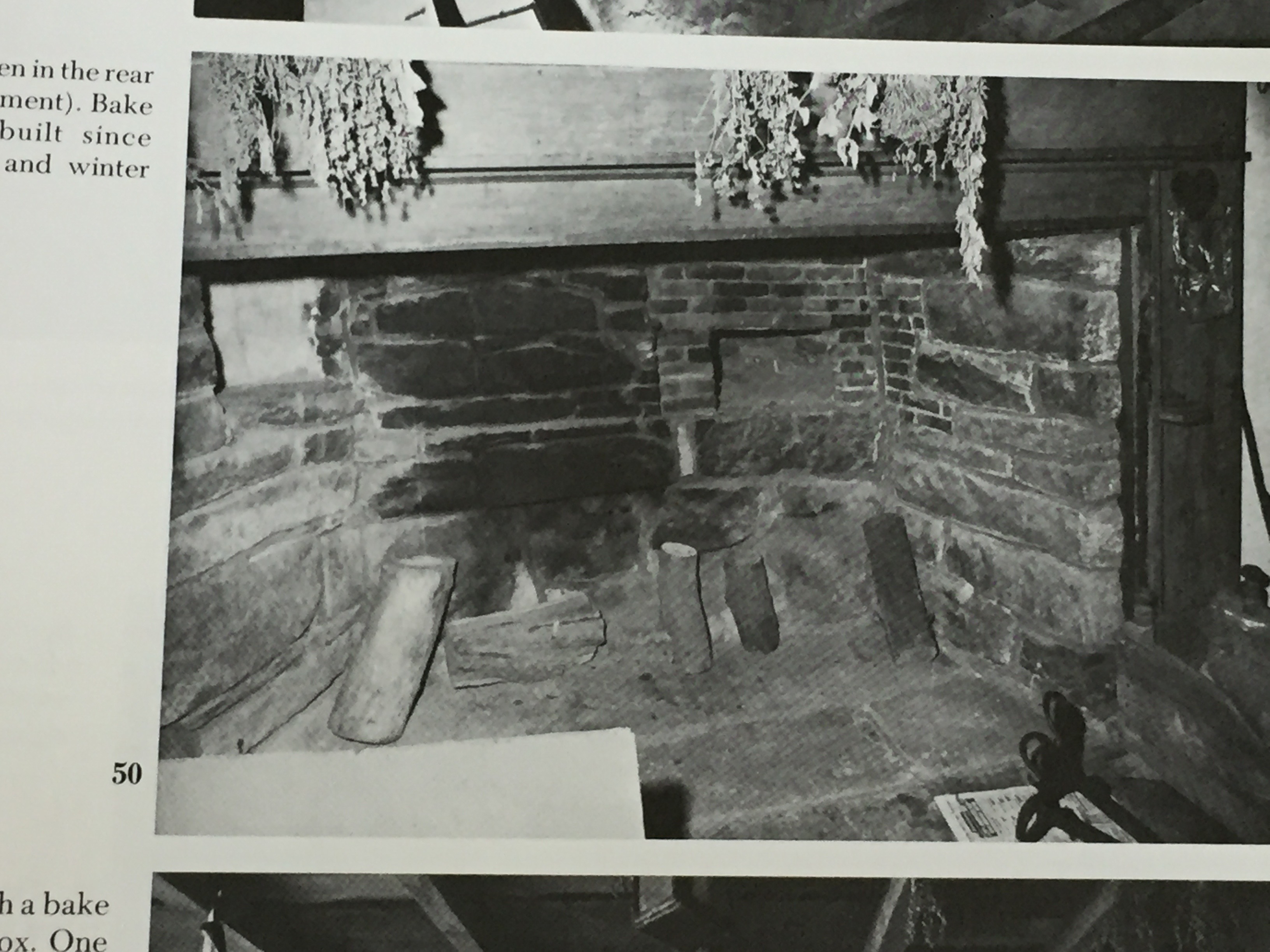 A fireplace with bake oven in the rear. [Edward P. Friedland, page 33, photo 50.

The three fireplaces on the first floor connected to three chimney stacks which then reunited to make a center chimney stack to the roofline. The beehive oven sitting in the middle of the chimney stacks raises many questions. We know that an earlier fireplace sits behind the one we showed in Part 1. We speculate that the later one dates about the mid 19th century.

Since, according to Friedland, the rear oven design fell out of favor by the first quarter of the 18th century, how do we explain this style in the 1762 era house, attributed to having been built by Job Mosher as a wedding present to his wife Amie Akin, niece to Elihu Akin? Is it possible that Job Mosher built his house reusing an earlier foundation and chimney structure on its footprint?

The images below provide a close-up view of our interior beehive oven, showing signs of use and repair. We can only wonder when inhabitants last laid eyes on this oven and indeed used the earlier and larger fireplace. 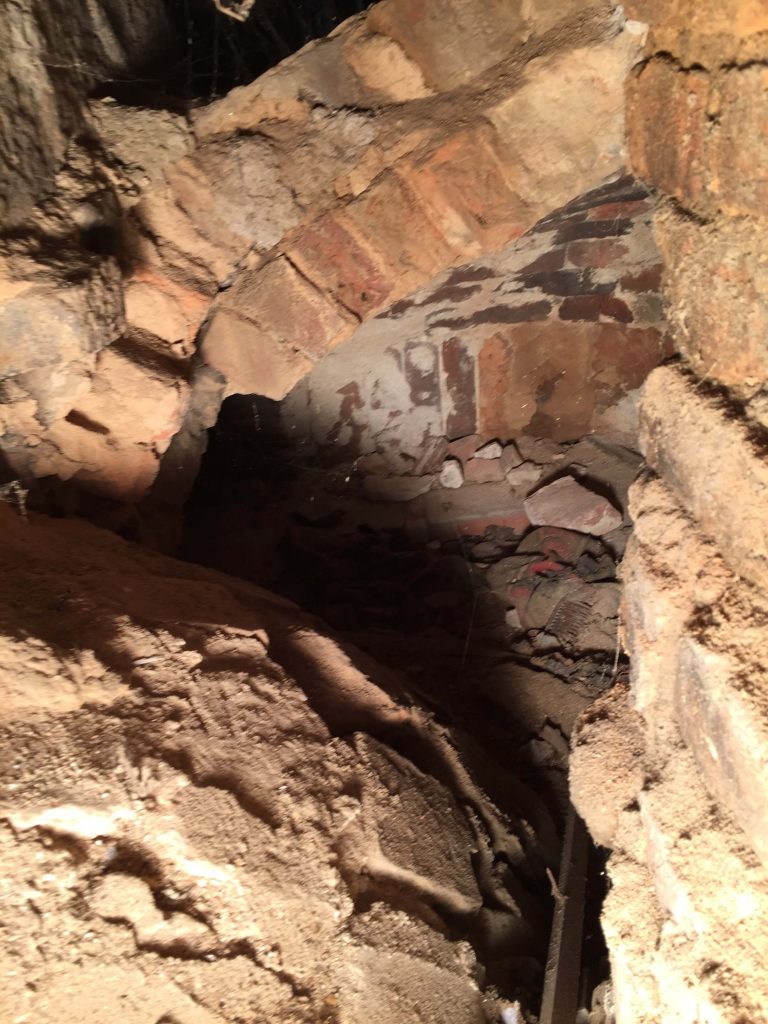 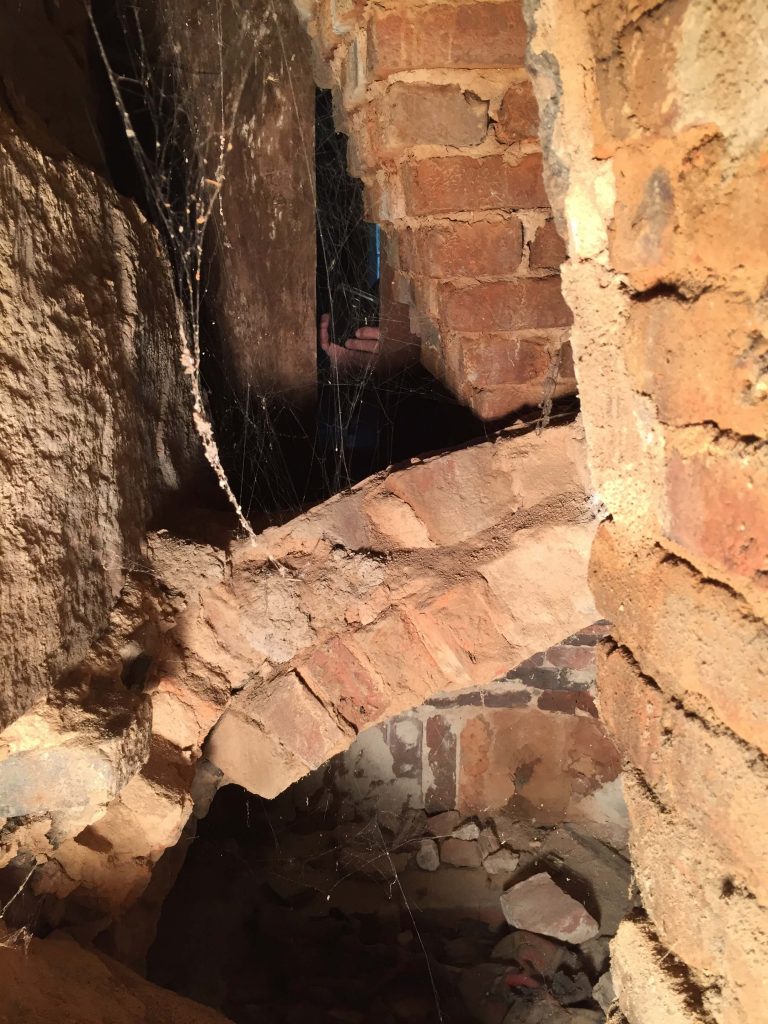 Detail showing a granite stone above the original beehive. Likely part of the front of the early fireplace. 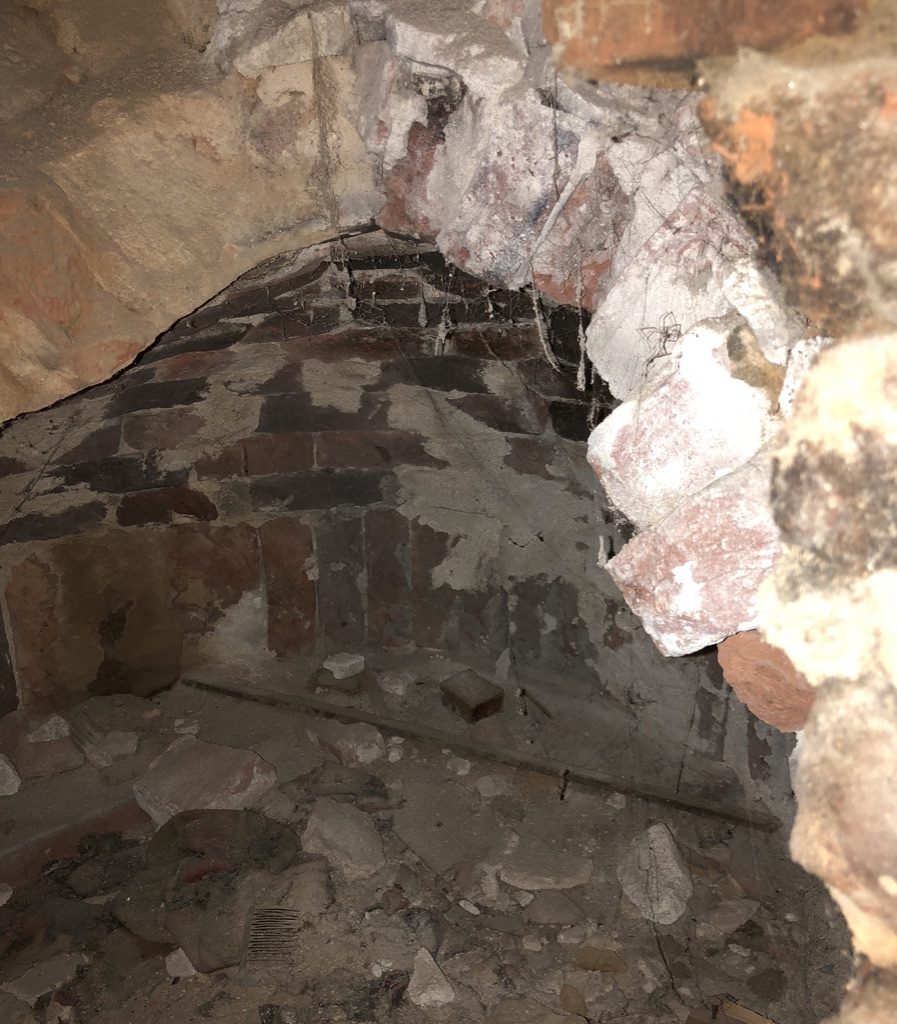 A close view of the interior of the original beehive oven. Note the full entry of the oven with some damage on the right side.

In comparison, below photos taken in August 2008 show the beehive oven constructed to be on the right side of the fireplace and hearth, ca. mid-19th century. 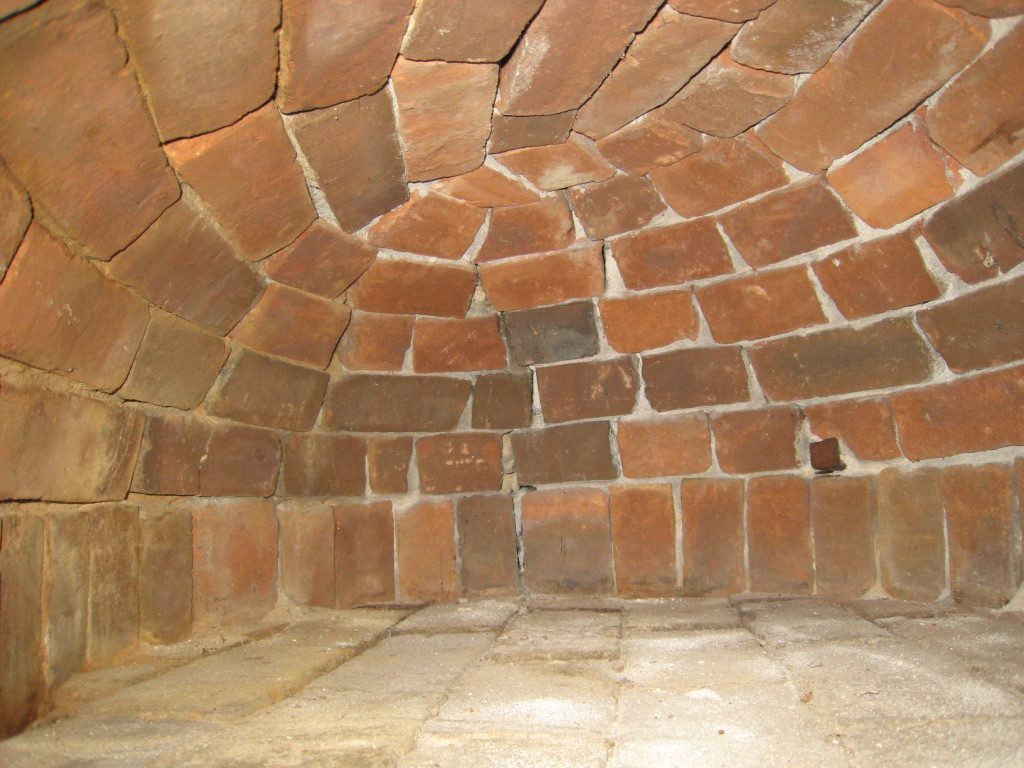 Beehive oven to the right of the fireplace and hearth. Straight on view. 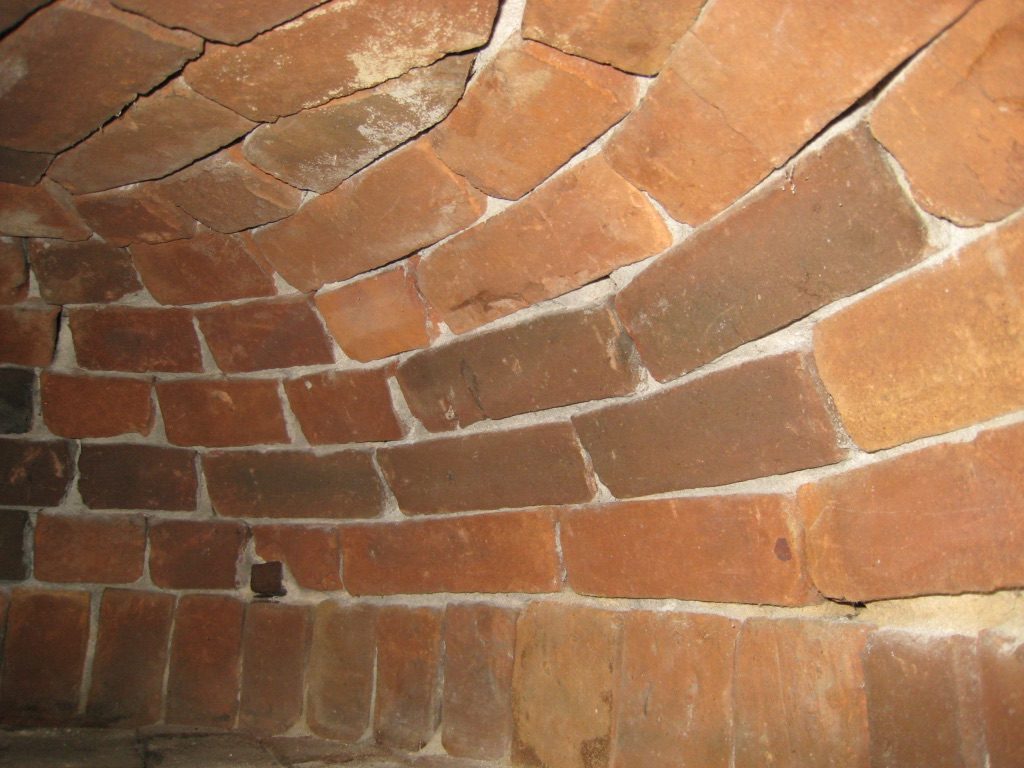 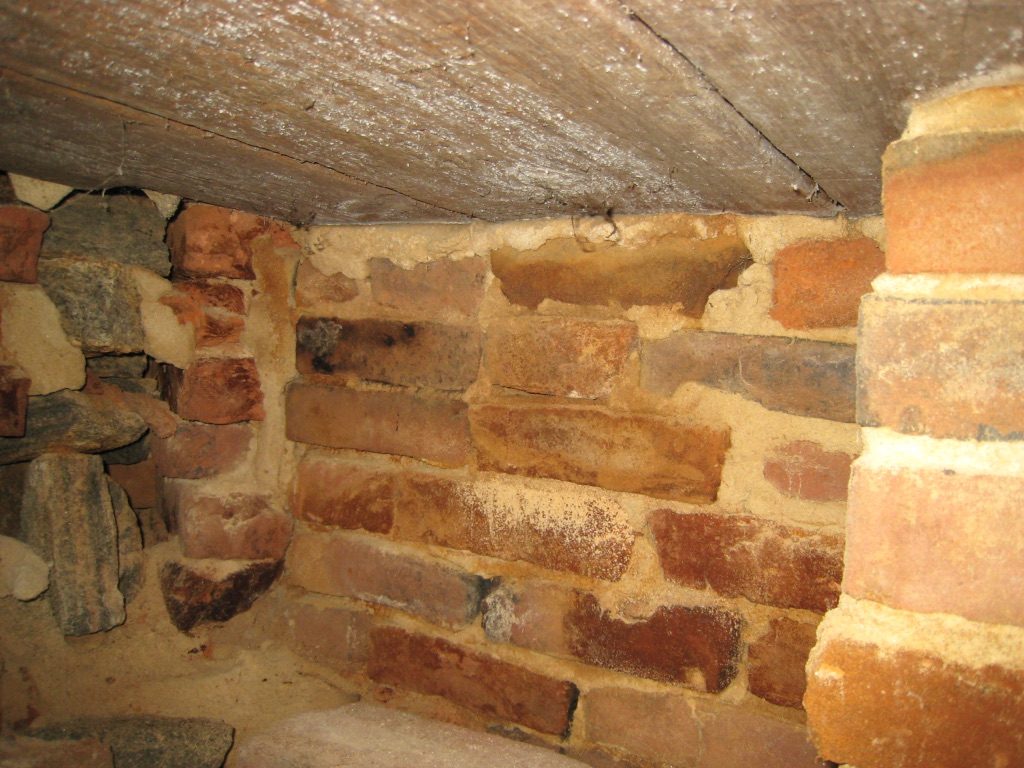 We noted how clean and perfect this oven was.  Was it never used? Rebuilt? We have more to learn, so stay with us on this journey of discovery.