The Anatomy of an Eighteenth Century House Center Chimney, Part 3.

Preserving Dartmouth’s Heritage from the Foundation Up

Our mission statement is never truer than the work we are now engaged in to preserve, protect and restore the center chimney and all the complex piece parts which make up a whole unified structure.  How many 18th century houses have been examined so carefully in order to study and educate? If still extant, most were restored up to a point and renovated, perhaps only one fireplace and hearth brought back to original or “modernized.” The old materials simply discarded or taken off site to be reused elsewhere. Not so with the Akin House. We believe in reuse whenever possible; and nothing of value, like bricks and stones, leave the site. Like our forbears, we waste nothing.

The massive chimney foundation is strong and steadfast, supporting the center chimney stacks which connect to the three fireplaces, serving three rooms.  We see flat granite stones intermingled with brick and wonder why. Fieldstone was plentiful in old Dartmouth but bricks were cheap.

The cellar is nothing but fieldstone. Above ground, that’s another story. 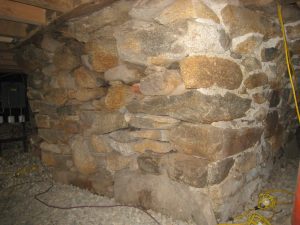 A view of the chimney foundation built of large granite stones. To the right, mortar repairs from another era but repaired again in 2009 using the mortar formulation from the 18th century. 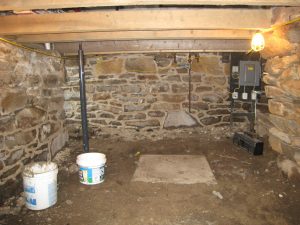 The house foundation on the south side, repaired in 2009. The cellar entrance to the far left and the east foundation barely visible. 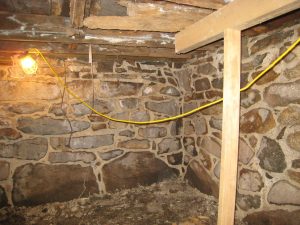 Another view of the house foundation. Note the largest granite pieces at the bottom, partly below cellar grade.

The work in progress to restore the center chimney, as 2018 fast approaches.

Fasten your seat belts, it’s going to be a bumpy “ride.” How can such a little house have such a massive center chimney? Before any masonry restoration and repairs can be done, the massive chimney showing through on the first and second floors needed to be shored up. Incredibly hard work and dangerous when safety is paramount. How many 18th century houses are extant with the bare bones of brick and granite gracing the interior? Most were destroyed or renovated with little trace of the most significant features of these early houses. This Dartmouth treasure, a rare cultural resource, becomes more important to this community as “this little house with a big story to tell” bares its soul.

Paul Choquette & Co. Historic Masons & Artisans were responsible for the Akin House foundation work in 2009, shown above. In 2017, in partnership with our contractor, Tom Figueiredo, they are back to work on the center chimney configuration from the first floor up.

There are no better historic preservation masons in Massachusetts or anywhere else than Paul Choquette and his team.

The first order of business was to shore up the chimney structures. The first floor required a combination of a steel post along with 8 X 8 timbers to keep the fireboxes and chimney stacks from collapsing under the tremendous weight bearing down from the large chimney on the second floor reuniting the smoke chambers. 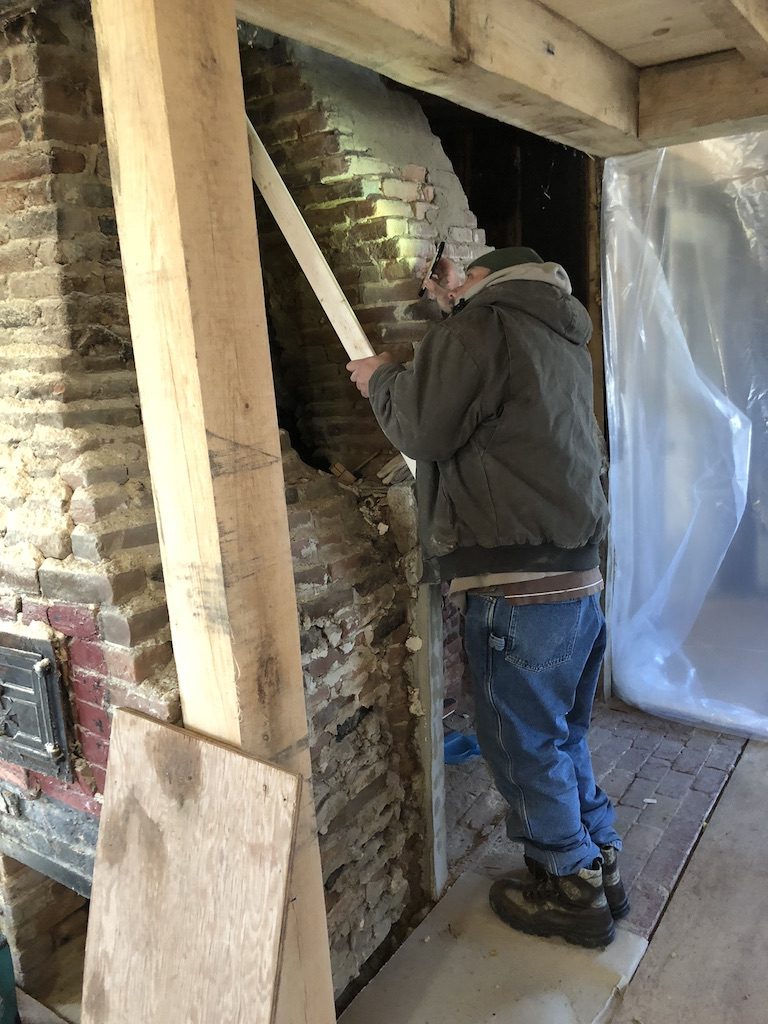 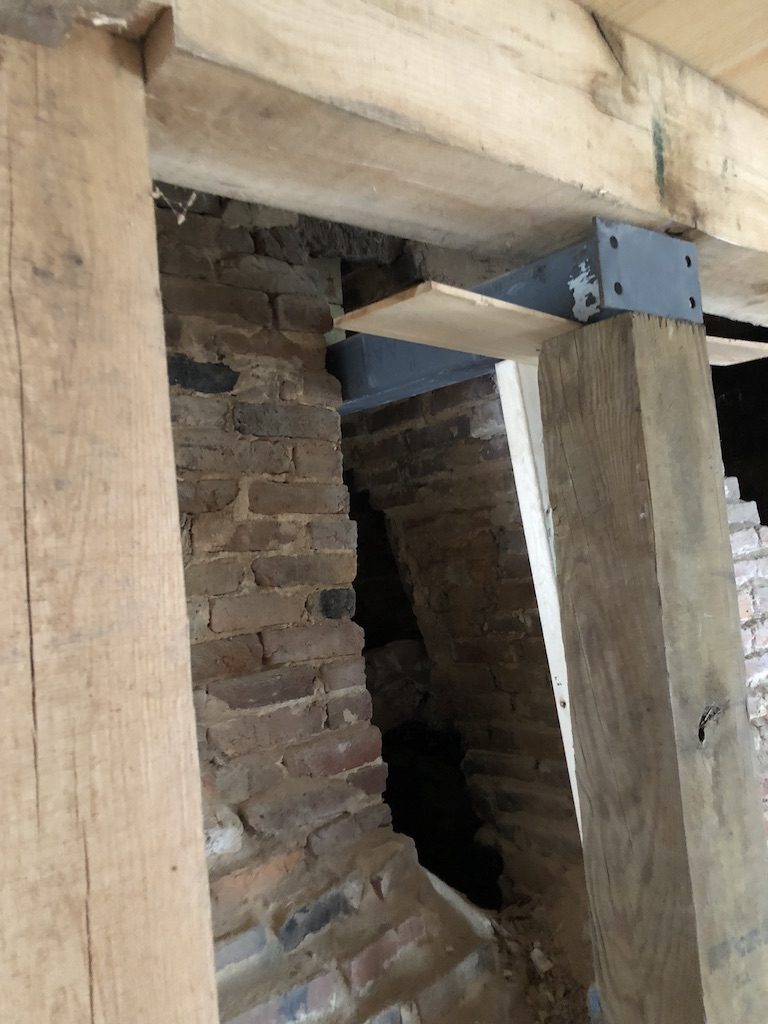 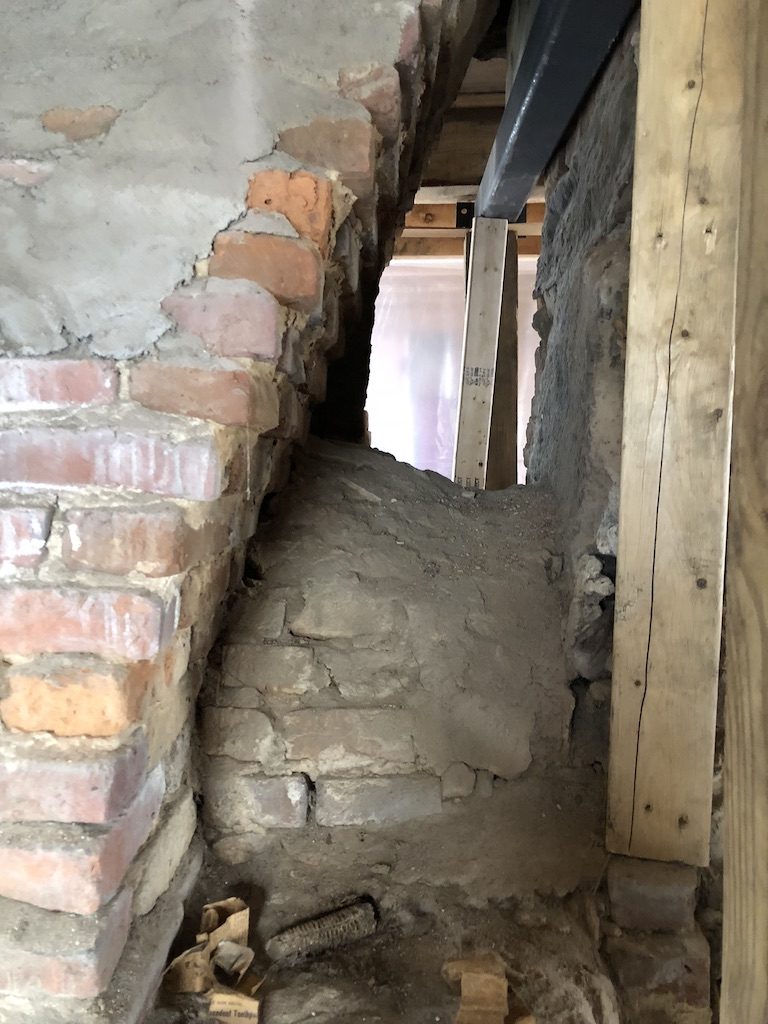 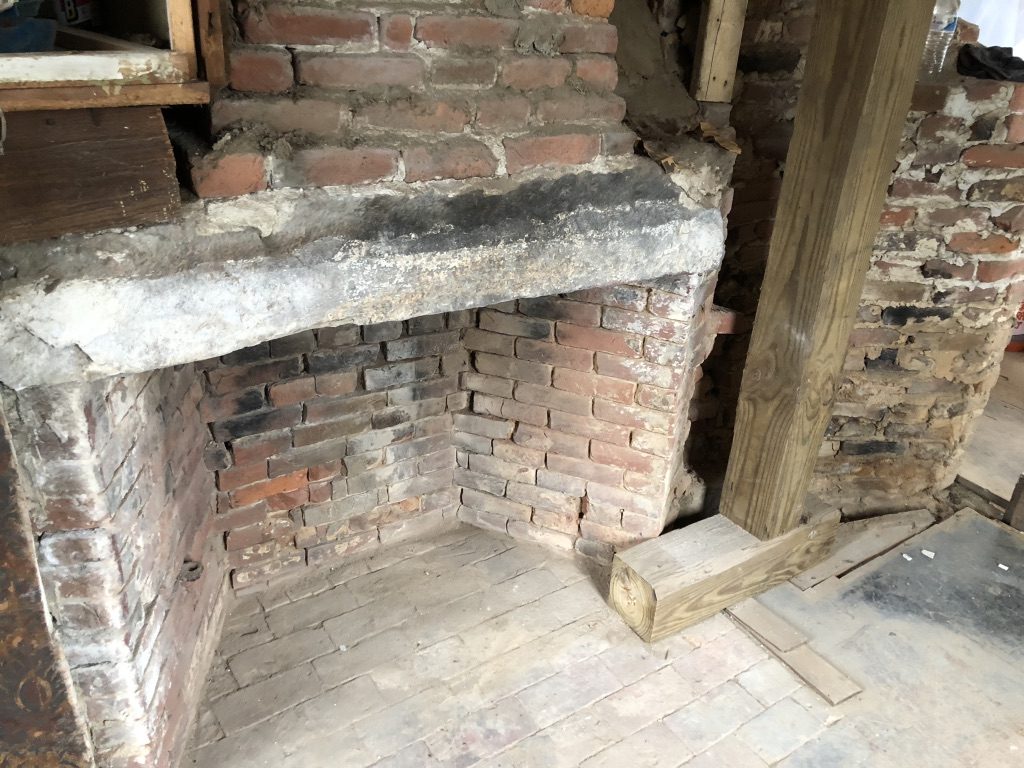 A view of the fireplace and hearth in the sitting room, exposing its granite shelf after the removal of the Greek Revival mantel. To the left is the back side of the original beehive oven from the sitting room. The chimney stack shows a repair with later mortar.

On the first and second stories, grueling and laborious grinding was required to loosen the old mortar to loosen the brick and granite for the next steps of restoration. With the first floor structure shored up, the next step involved strapping the chimney, shown below, with the surface mortar removed. A messy job indeed! 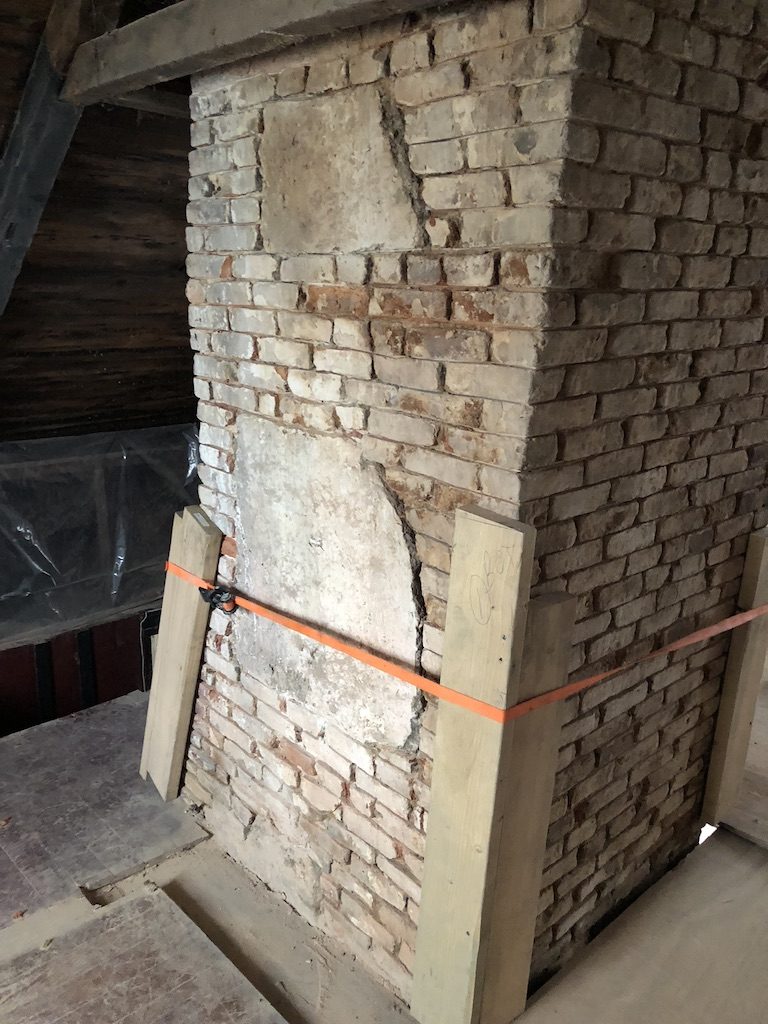 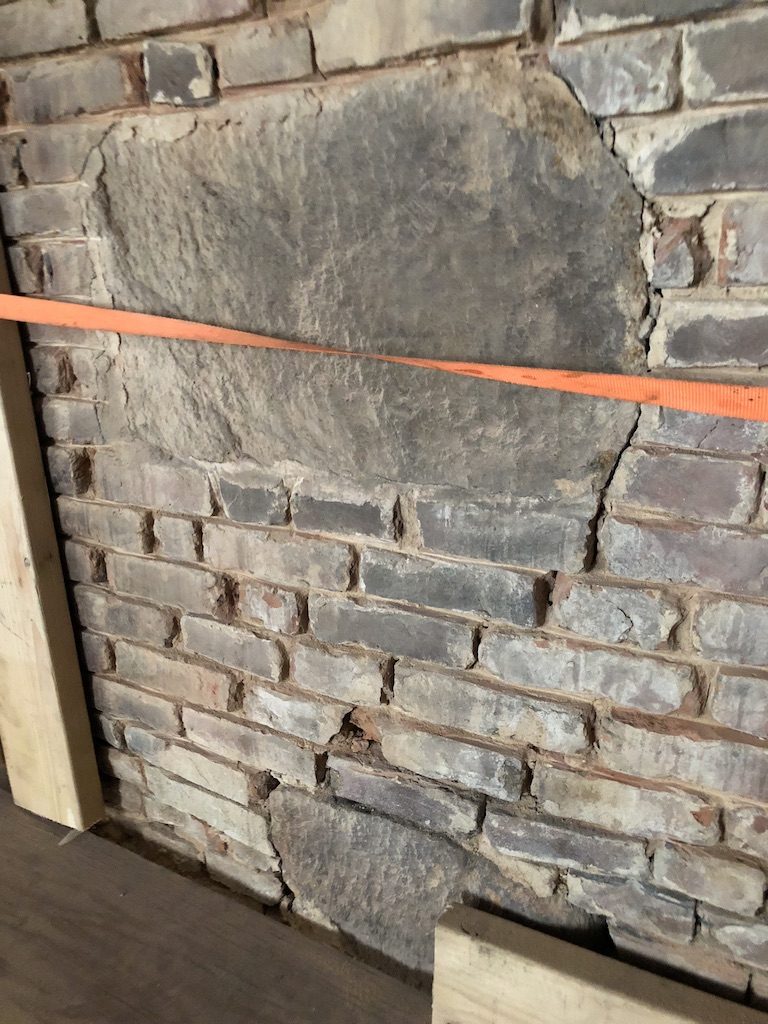 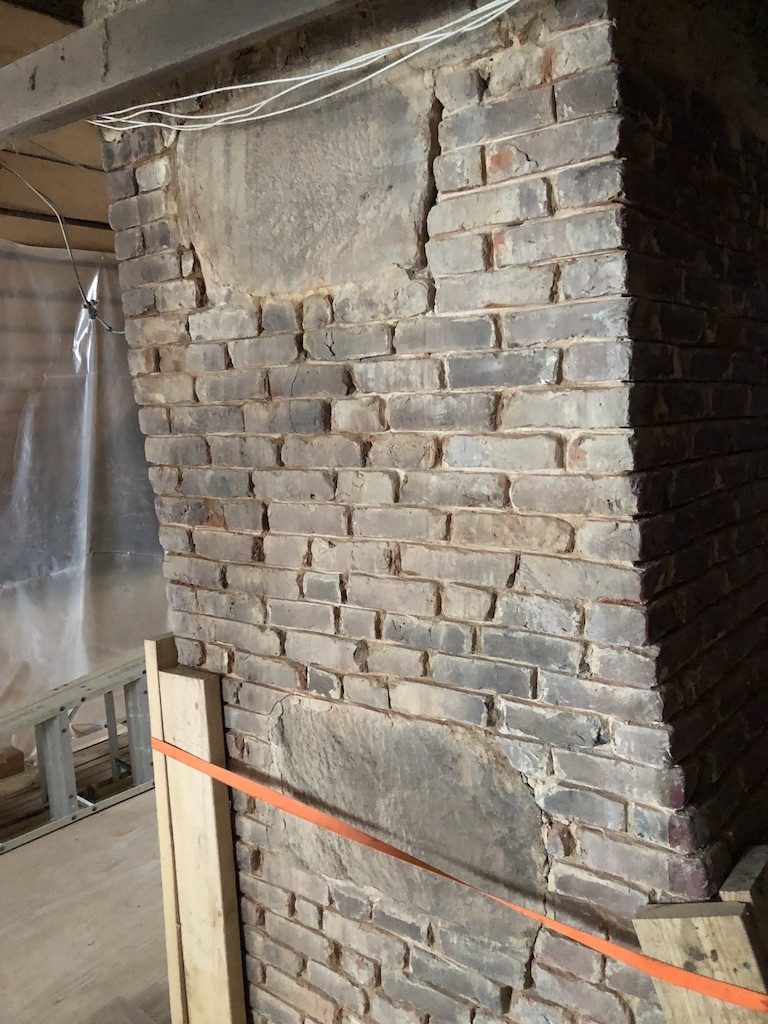 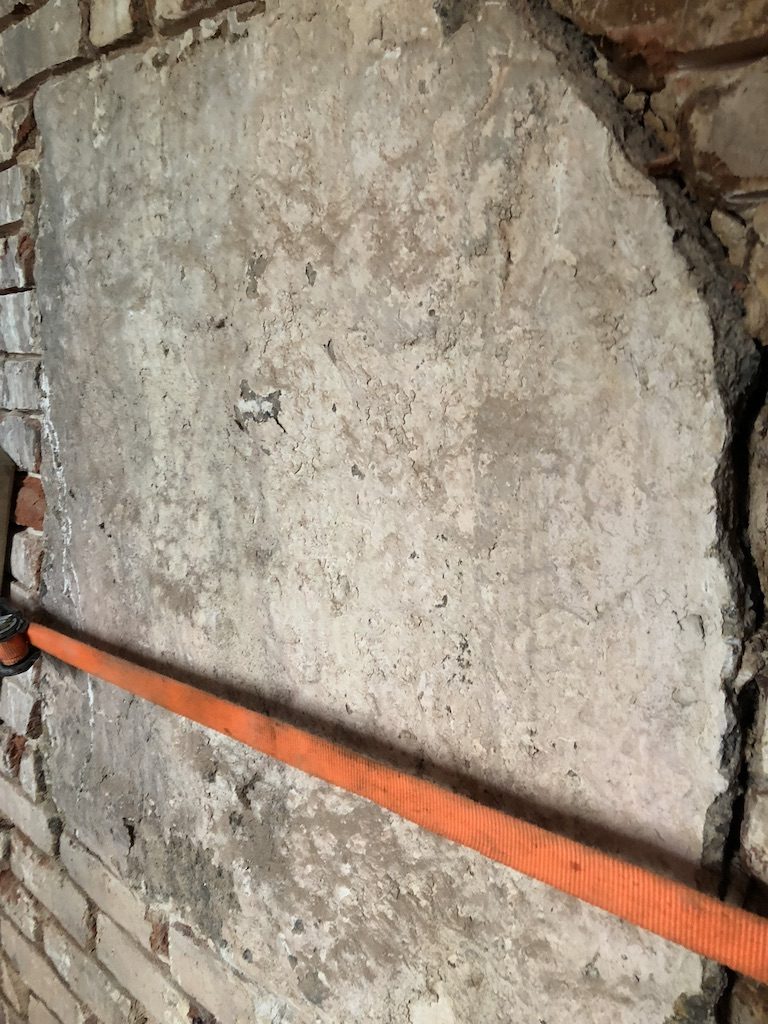 Another Akin House curiosity. What was the thought behind adding large granite pieces along with bricks? Granite can be found intermingled with bricks throughout the chimney stacks as well. Over time the granite weakened the structure, much like Portland Cement used in the 20th century destabilized brick structures.  This is another research topic for us. 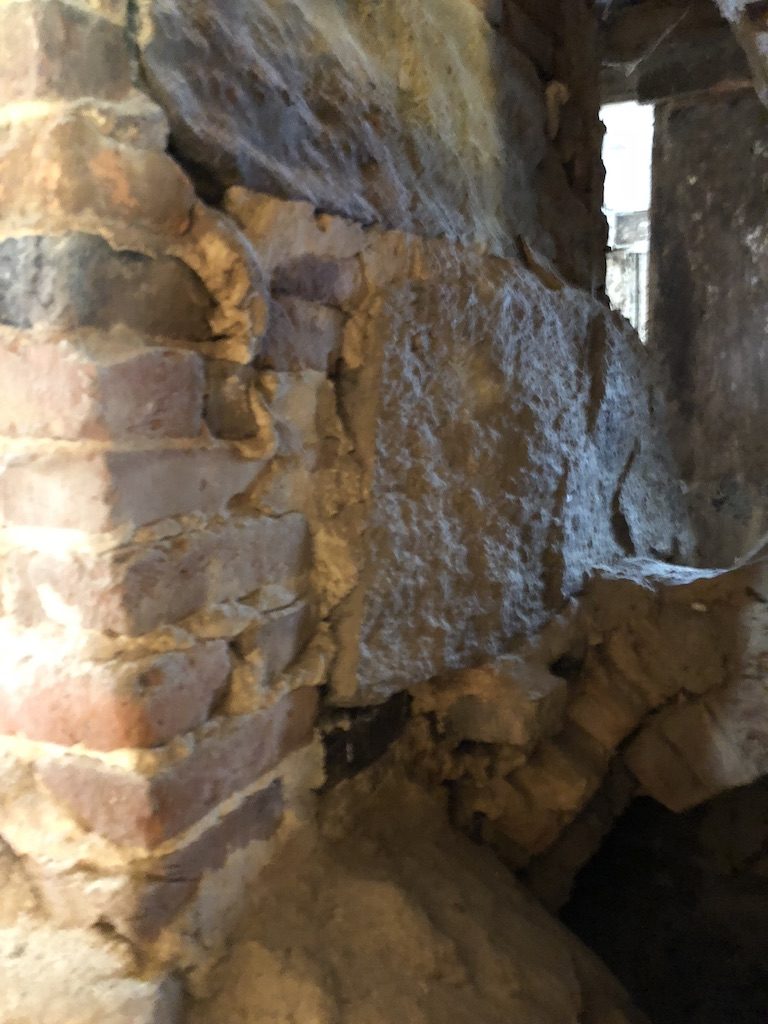 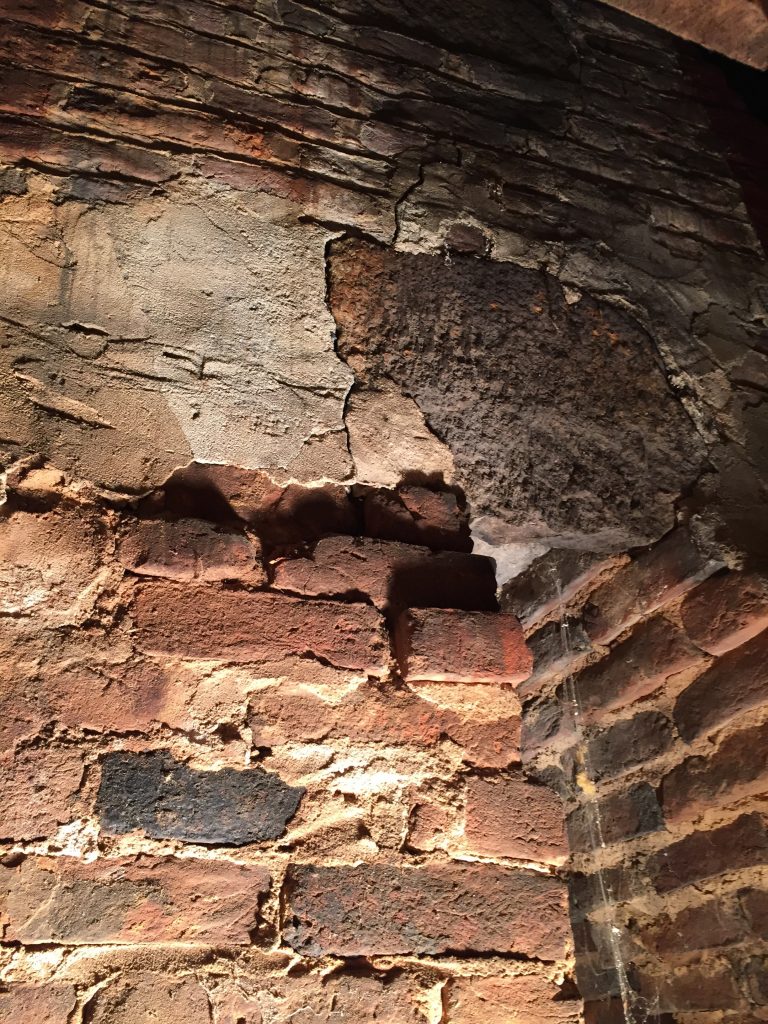 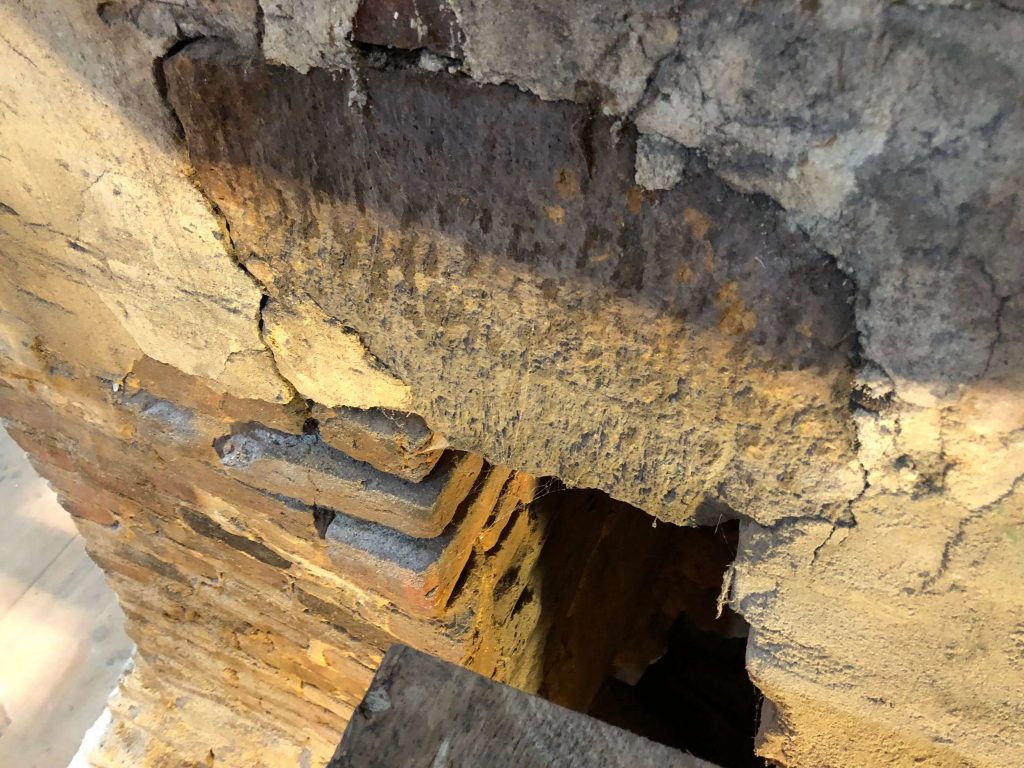 We will find that some large granite slabs were in fact a part of the original fireplace and hearth while others were used along with bricks for support or filler. The far left photo may be evidence of the early fireplace built with granite. Note repairs and brick instability in these photos.

Below photos: An appropriate use of granite as a lintel above this early fireplace in the formal parlor. Note the whitewashed chimney stack above this fireplace. Was it exposed at one time? Stay tuned for photos after restoration without the unsightly red paint no doubt applied for cosmetic reasons in the 20th century, hiding a vast multitude of sins. A quick fix in 2009 required some repairs such as the cement applied on either side of the firebox. 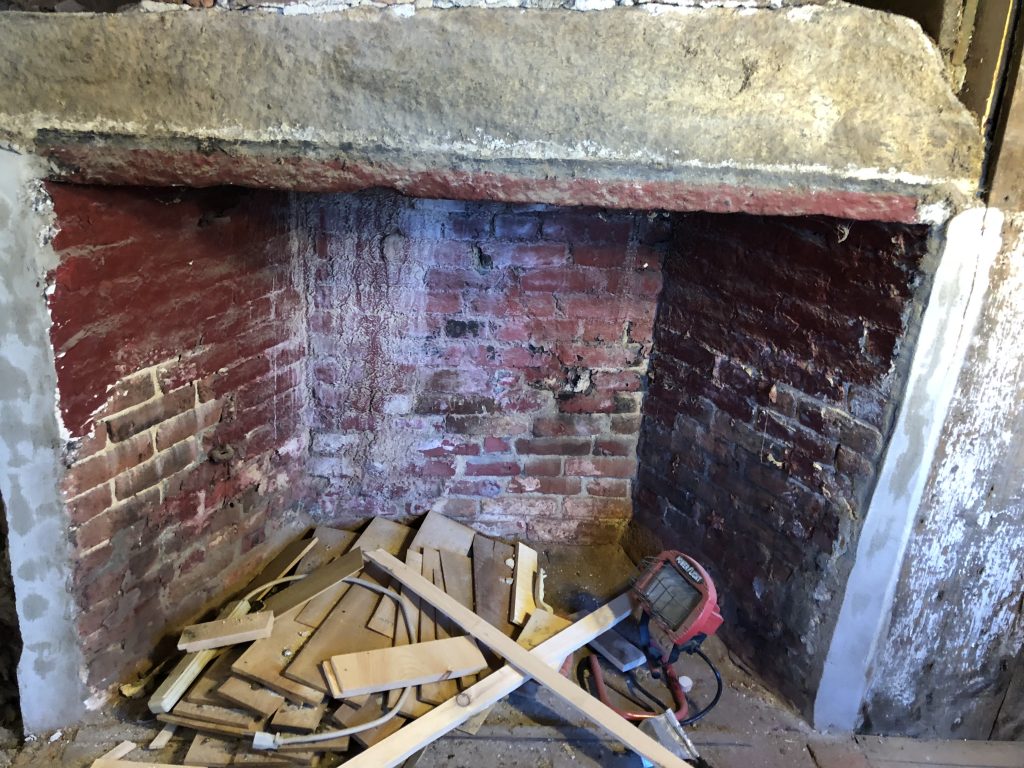 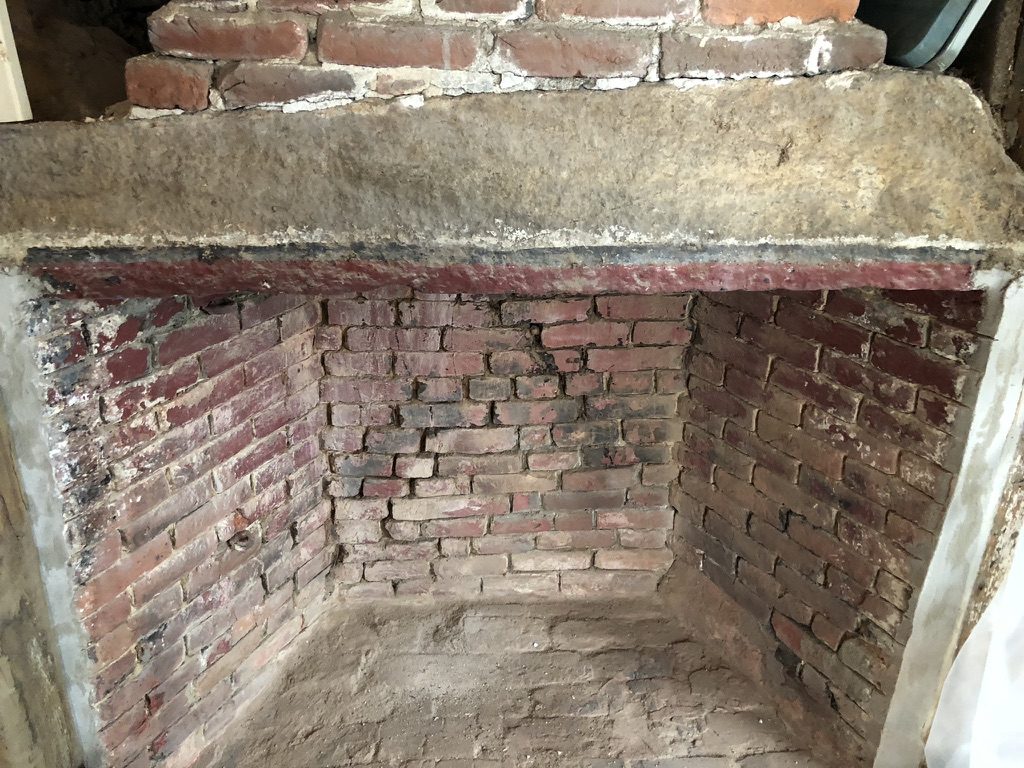 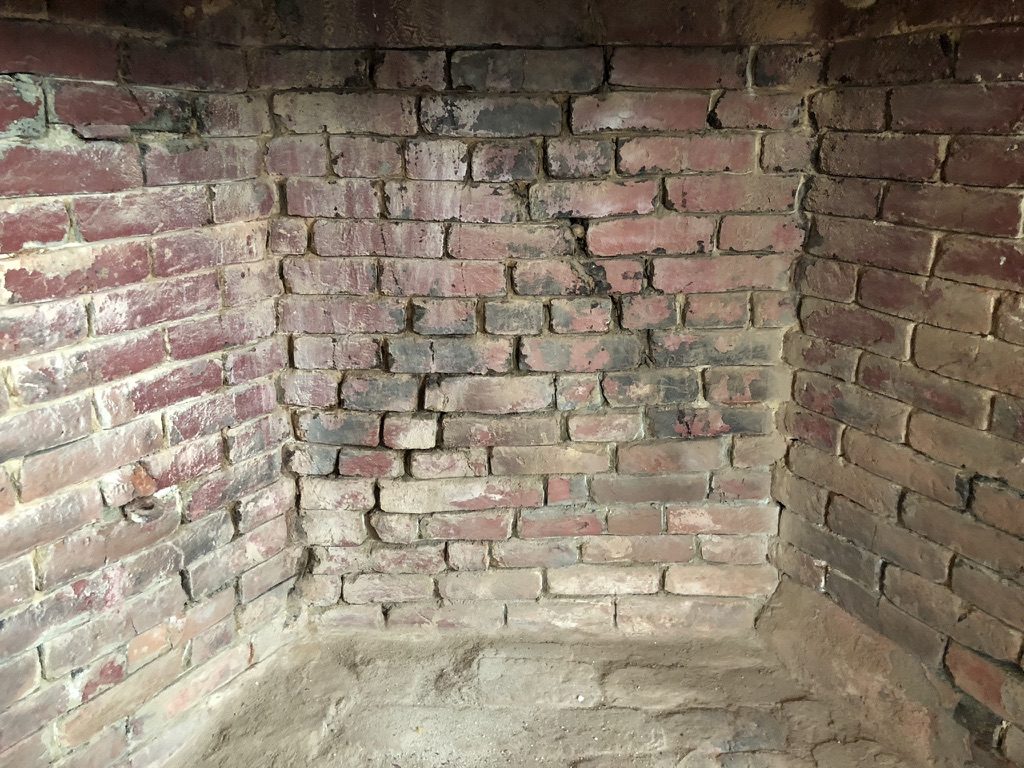 A close-up view of the firebox after the mortar was ground out for restoration preparation. To the right, a closeup of the whitewash. Applied for what purpose? Was this stack exposed originally? It would have matched the whitewashed exterior wall panels in this room. 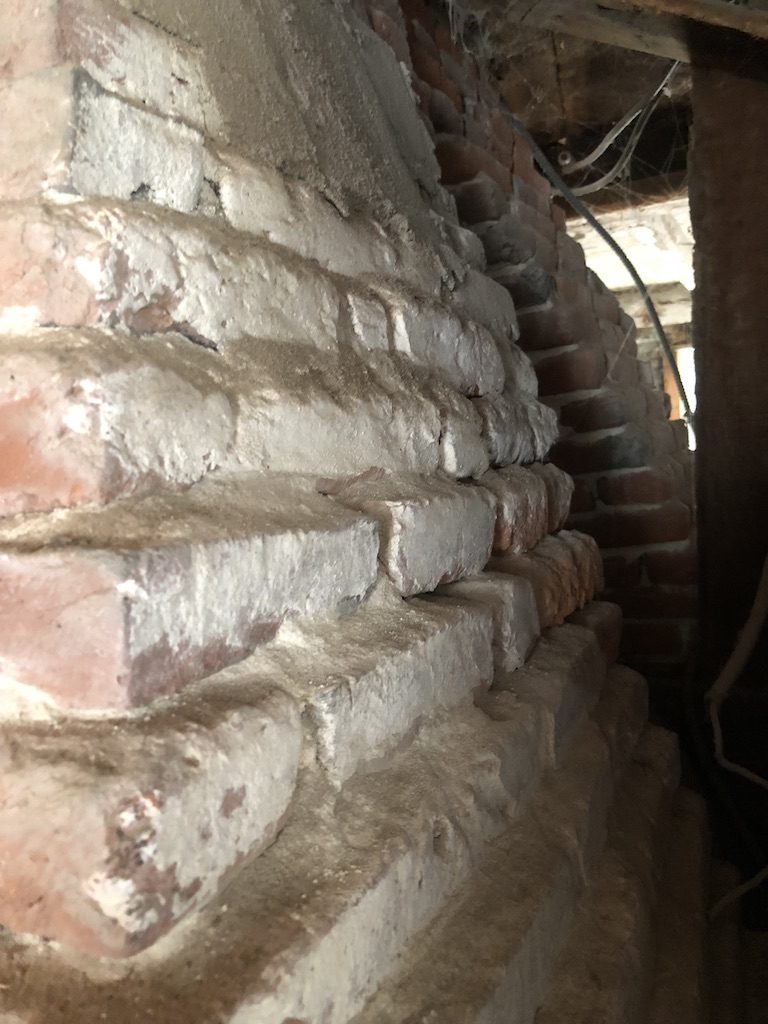 Thus ends this blog with an image of the dust from the old mortar collected in these buckets. 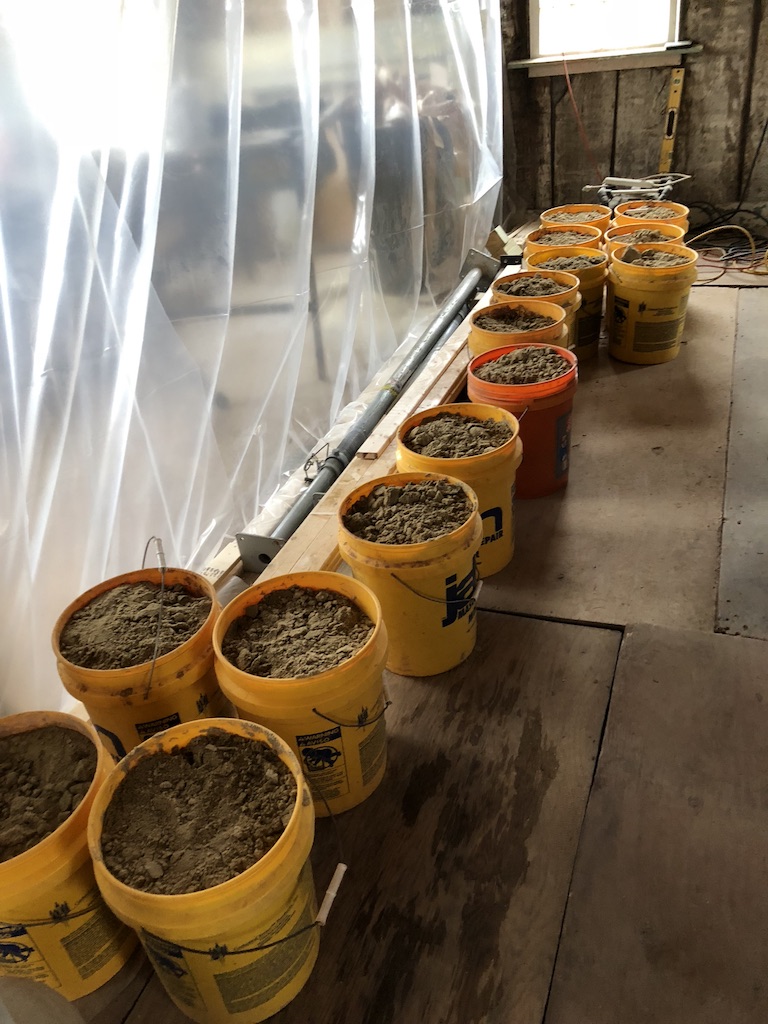