“A Chamfer: A sloping or angular cut to round off the corner or edge of a board or timber.” (Edward P. Friedland)

The above image is a profile of a chamfered joist, one of two joists that are original to the Akin House construction, left extant in the great room/cooking hearth room. This technique was employed in the 17th century with many examples, some plain or decorated, featured in The Framed Houses of Massachusetts Bay, 1625-1725 by Abbott Lowell Cummings, 1979. [ISBN 0-674-31680-0]

Our antique house has been dated to about 1762 as evidenced by our research, but not far-fetched to assume that house building techniques going back to earlier times might well have been used into the 18th century. One might speculate that carpenter Job Mosher could have learned this technique from old timers or “mentors” of his day. Or perhaps, Job Mosher recycled these joists from another even older house. The reuse of materials was commonplace.

The building date of a house on its site doesn’t necessarily imply that earlier construction styles and techniques weren’t used. Well advised to keep in mind that the “devil is in the details.” In this case and many other cases as we try to understand and learn from extant old houses, these details and motivations are buried with the folks who really know.

Now for the Good News

There are only two such original joists in situ along with a few remaining original beams, corner posts, collar ties/rafters. Compared with demolition by neglect, a mixture of old with new far more desirable. We coined this “pragmatic preservation.”  Better than nothing?  You bet!

Back to the Joists Sitting Happily among New Construction 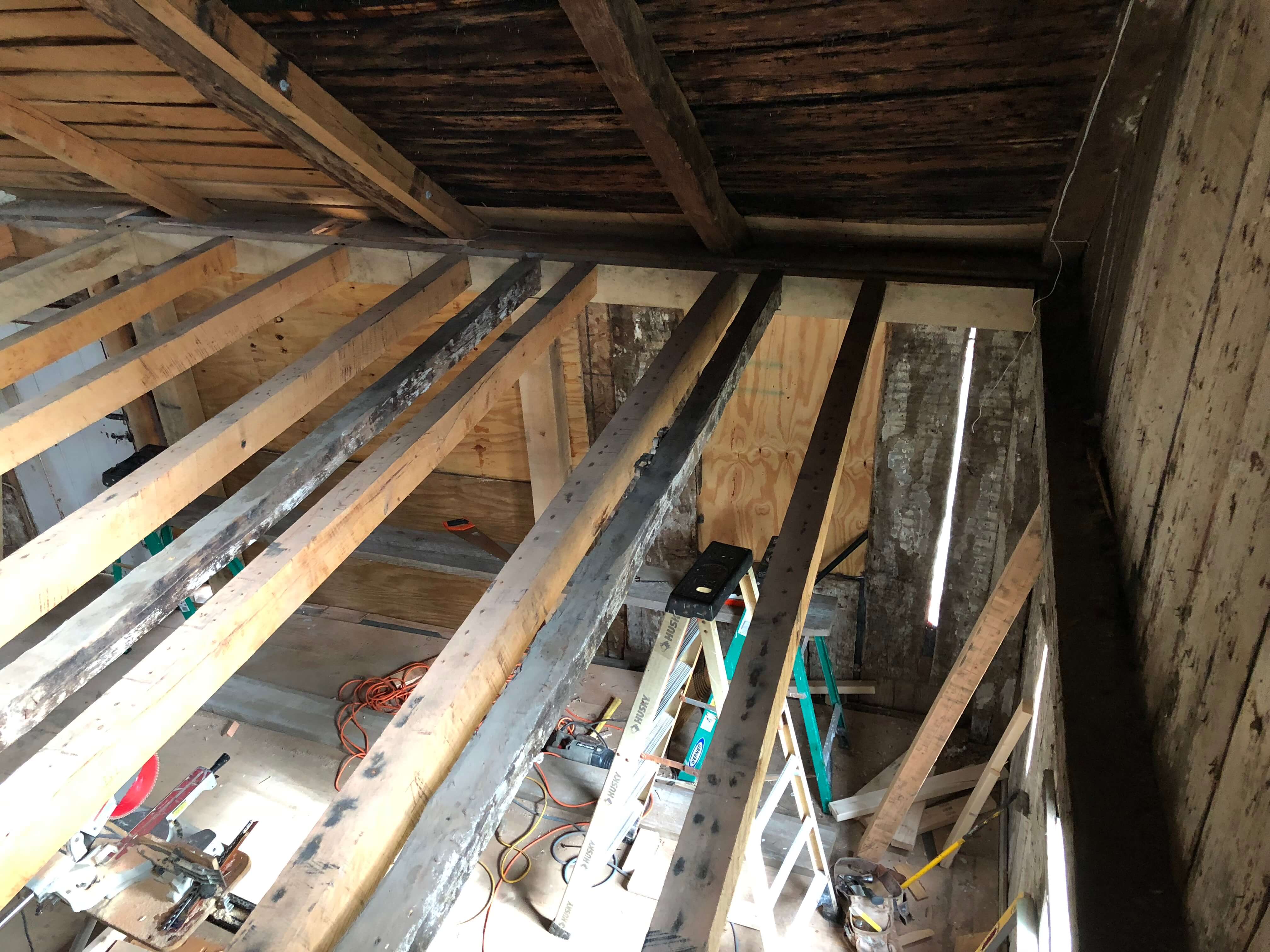 View from the second floor from October 2017. Note the two original joists side by side with new oak beams. 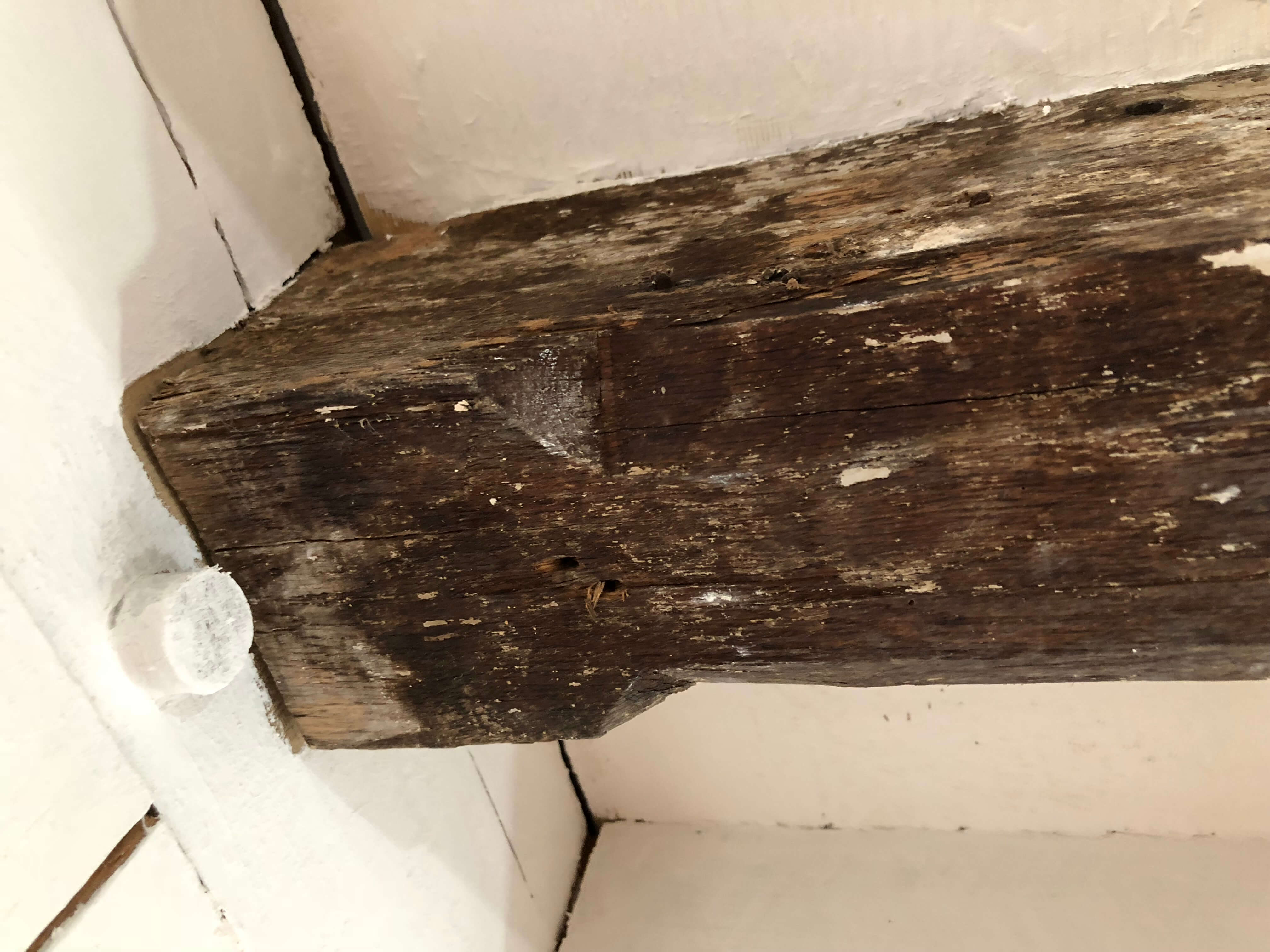 Close-up of the joist connected to the plate. 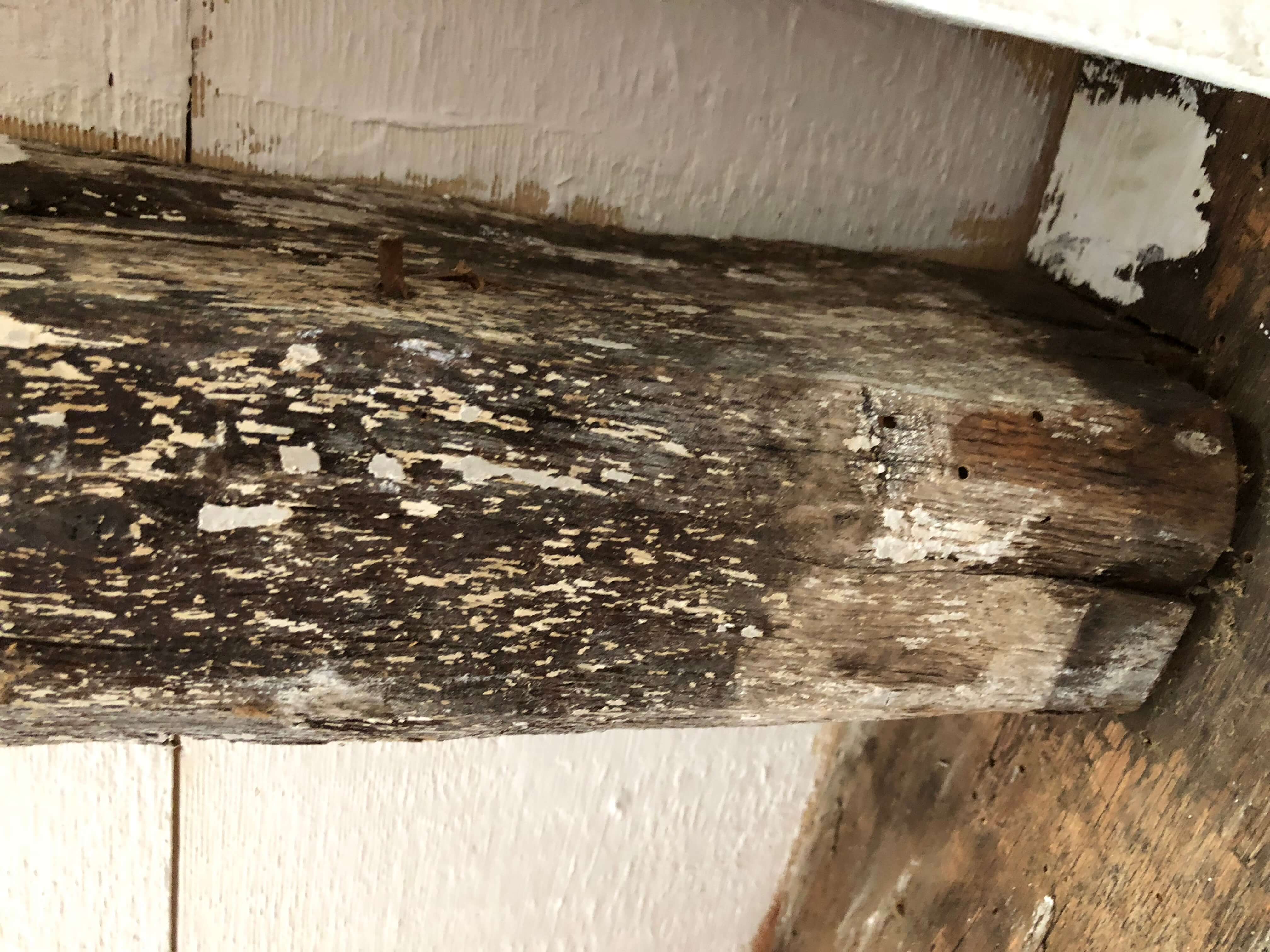 Another detail of a joist. 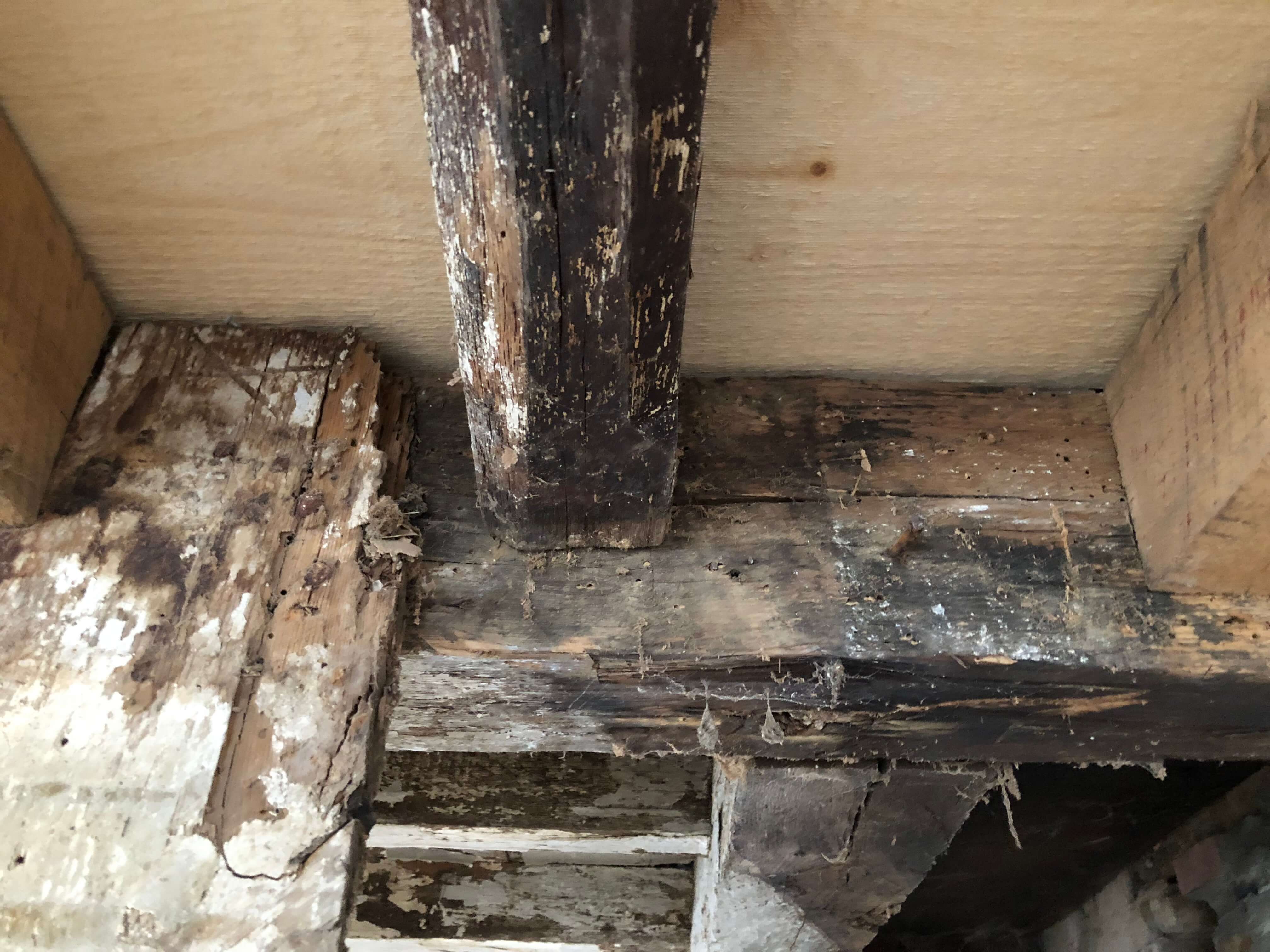 This joist end connecting to an original girt, above the hearth. 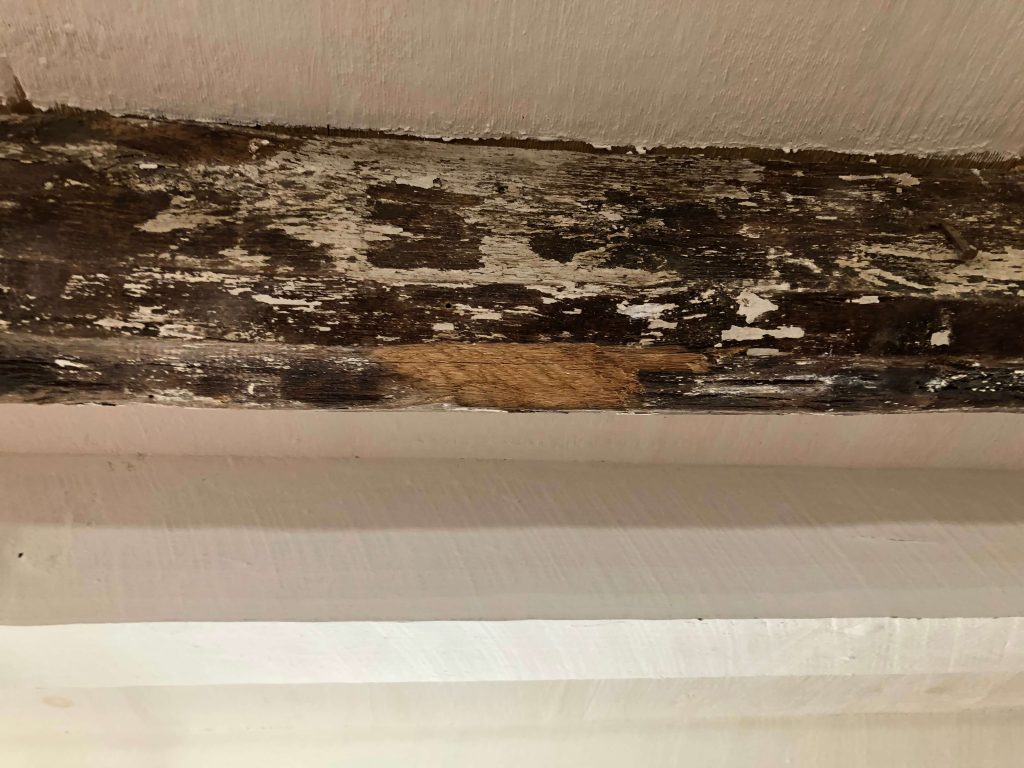 Notice the scraped bottom edge of the joist. Since these timbers were imperfect or uneven, a certain amount of trimming was required to install the plaster & lath ceiling, long since removed due to severe water and other damage in the room.

Modern Whitewash as a Means to Differentiate the Old

The newly installed oak timbers to replace the damaged ones were painted with whitewash in April, 2018. This effectively shows the original construction work against the new. We opted for whitewash because its use was prevalent in early houses and no one will mistake this finish as historic. Some evidence of early whitewashing can be seen on these original joists.

The Akin House as a “Study House”

“The principal framing members of seventeenth-century houses––the posts, girts, and summer beams––were usually planed (or more roughly smoothed with an adze) after hewing. They were frequently decorated with molded chamfers on their exposed corners or arrises.  These members were intended to be exposed to view.

“After 1700, with few exceptions, the framing members in dwellings were intended to be covered, either by wall or ceiling plaster or by casings of planed one-inch boards. It is almost always a mistake to strip away such a covering and expose any part of the skeleton of an eighteenth- or nineteenth century house in the belief that the builder intended this.”

Tradition supports Garvin’s view. Why have we chosen to leave the ceilings and corner posts exposed? There were no viable plaster & lath ceilings or original ceiling panels left to show, never mind preserve or restore. By 2008, the walls not much better. 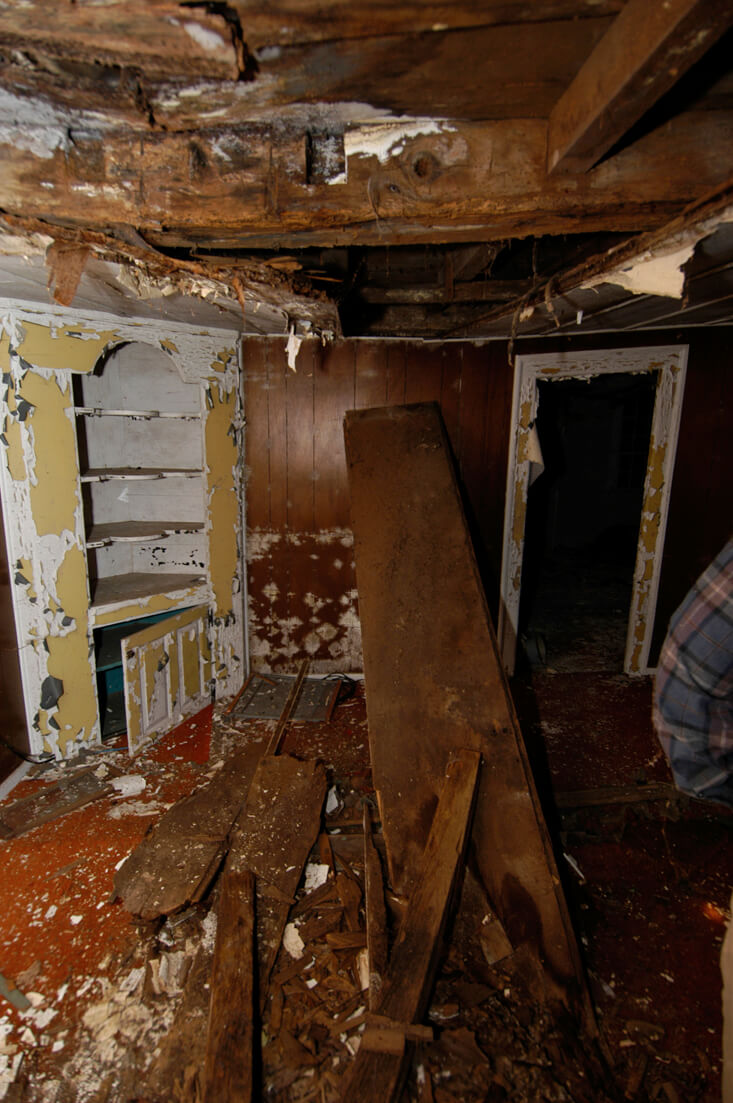 Formal Parlor as found in 2004. Photo by the late Tim Sylvia. 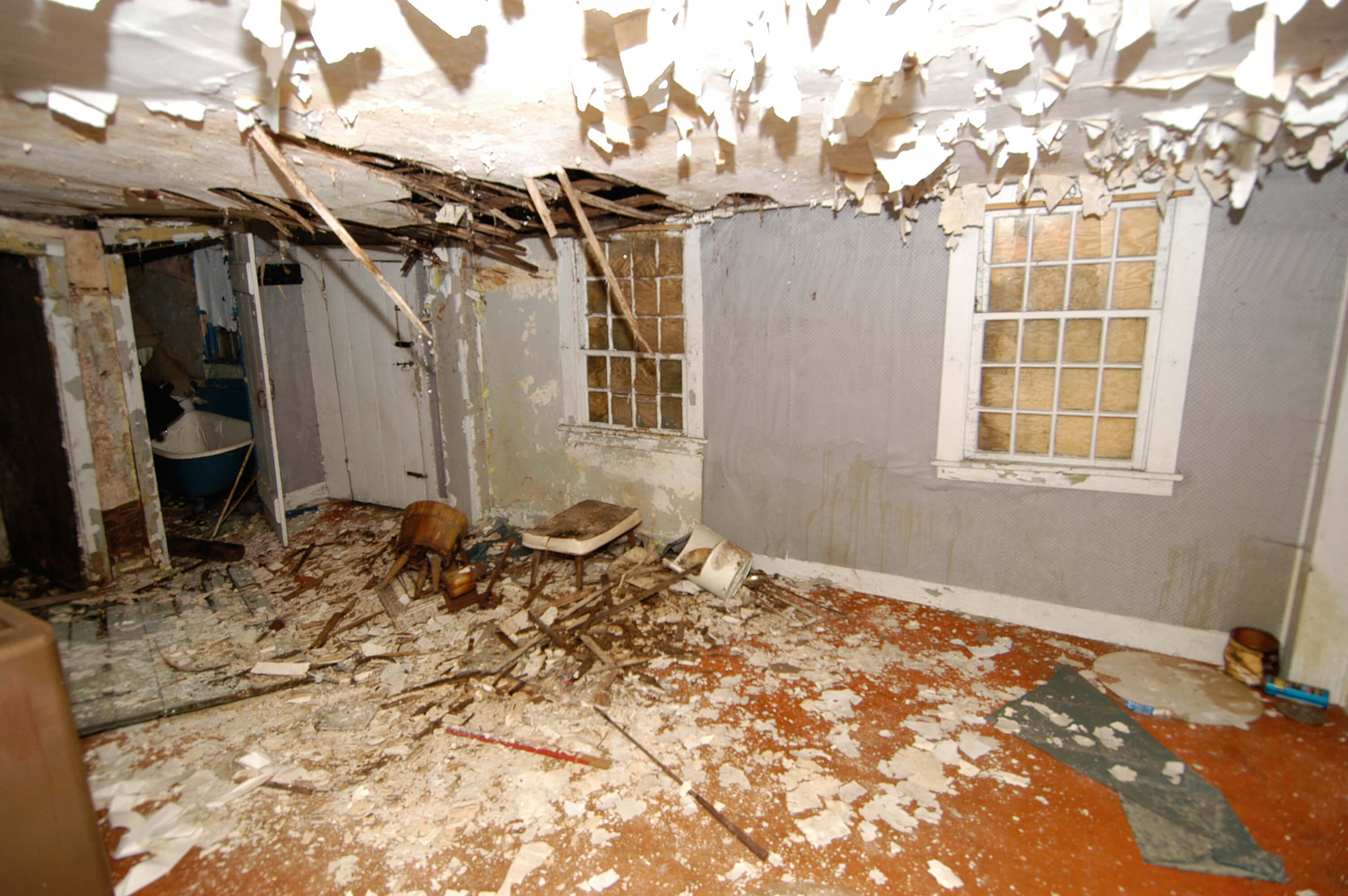 Great room/large kitchen area as found in 2004. Photo by the late Tim Sylvia. 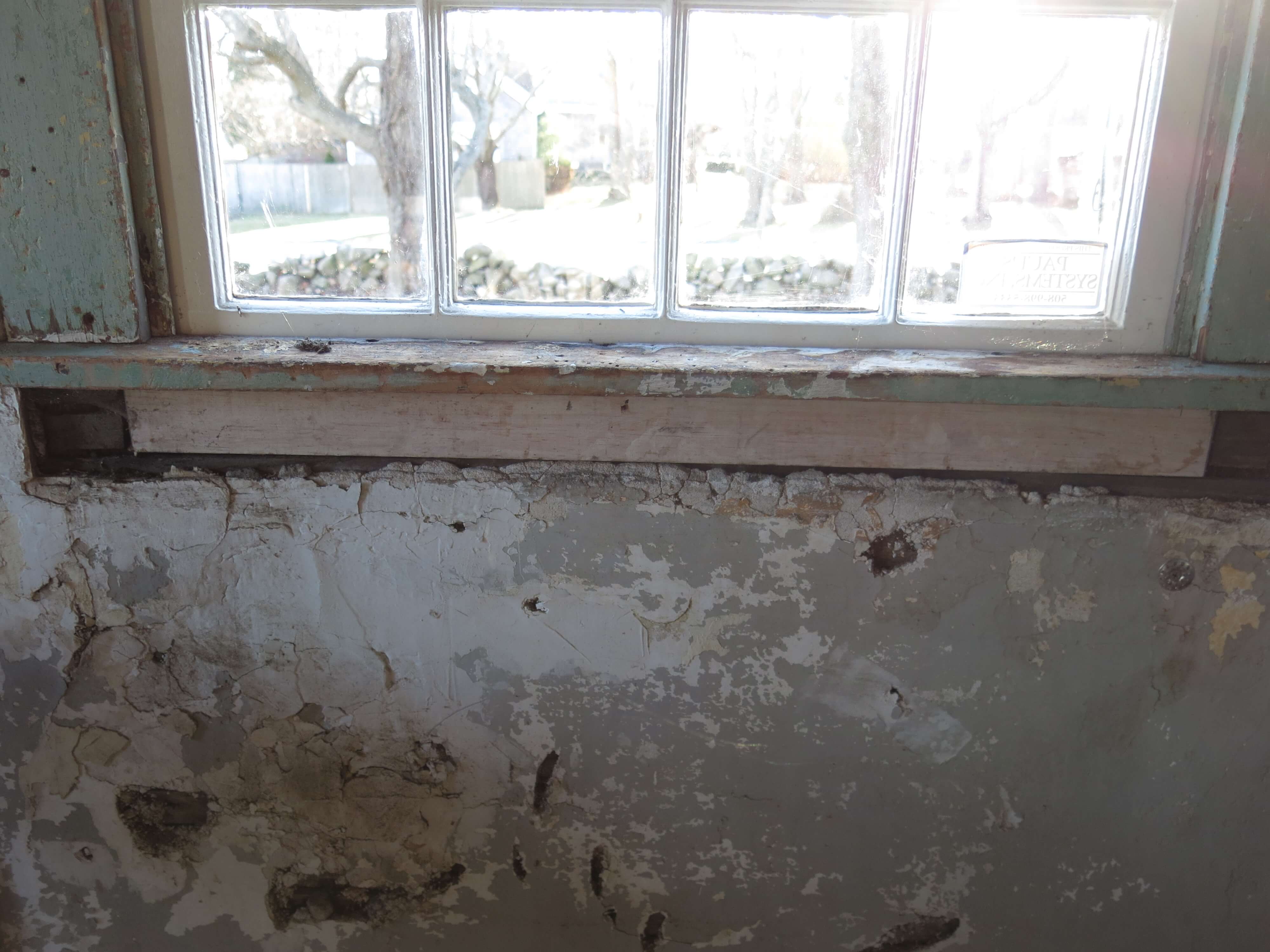 By 2008, wall finishes had deteriorated. 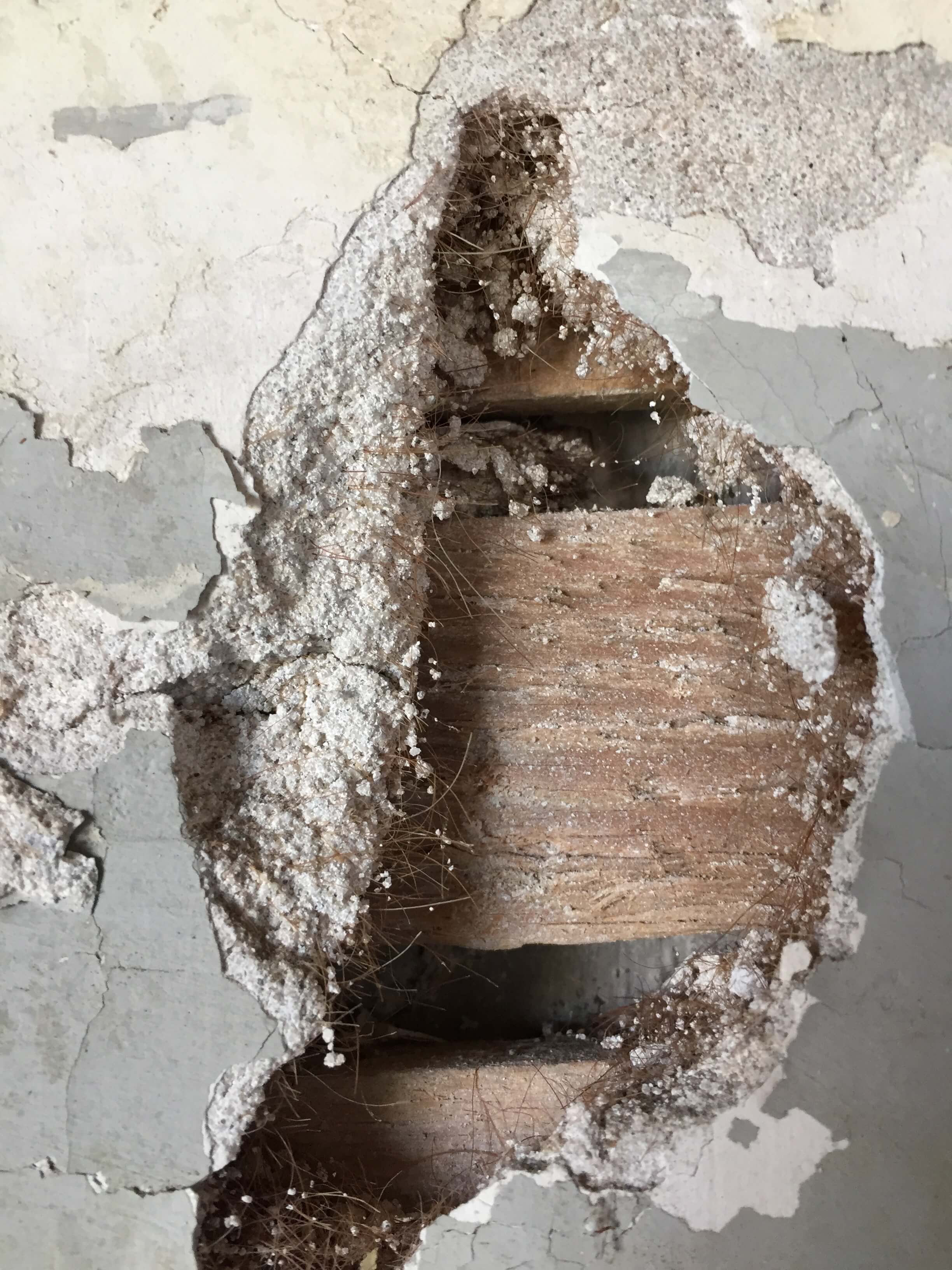 Our long-term goal was always to present the Akin House as a “Study House”, its severely damaged existing conditions supported a study house strategy. The new post-and-beam reconstruction co-exisiting with the original underscores a skeletal approach to show the forensics in certain interior locations of the house––yes, the house as historic artifact illustrative of the ways to save and preserve a historic asset.

An education for visitors if ever there was one, and for house stewards, preservationists and historians, interpretive opportunities galore.

The Little House with a Big Story to Tell!

« The Earle-Swift House at 60 Mishaum Point is at Risk for Demolition
Preservation & Restoration Progress at the Akin House, Part 1. »
View more posts from this author