A Short History of the Akins, Quakers and Slavery in Old Dartmouth

The image above is an artifact found in the Akin House during its restoration. This 18th century two-tined fork is an iconic example of domestic life within the confines of this modest farmhouse, perhaps warmed by a fire blazing on a cold winter’s night.  One can just imagine an Akin family member spearing a piece of roasted meat with that fork, discussing the events of the day, surrounded by family. 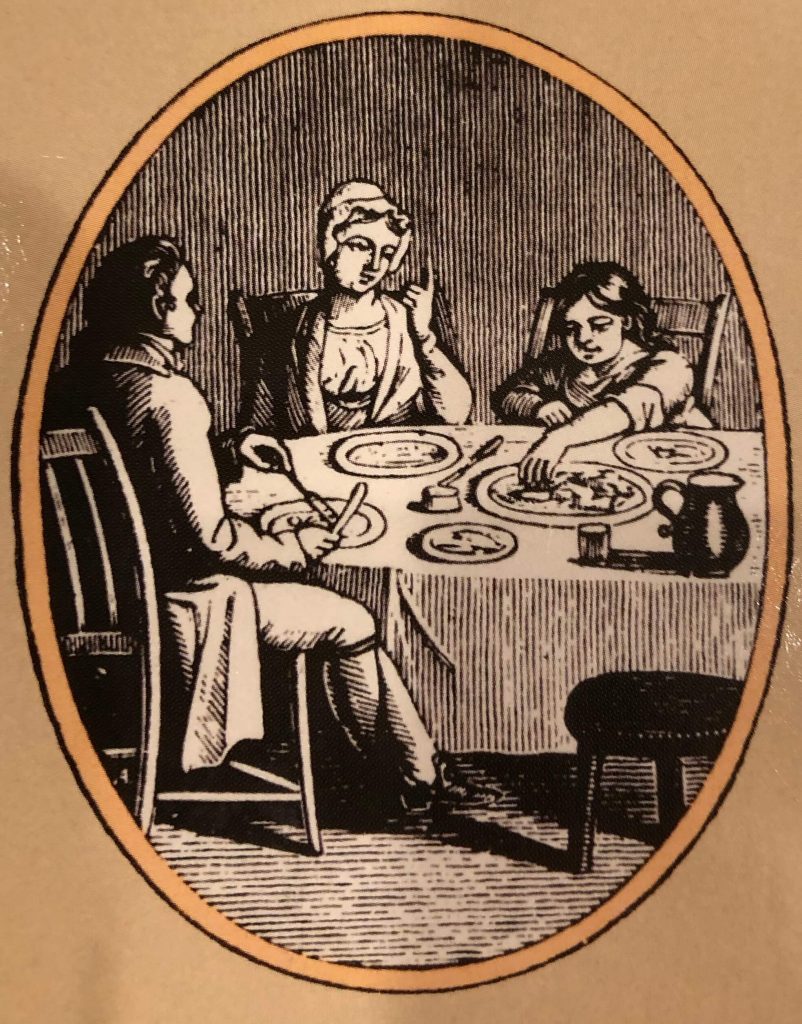 Drawing of one of the kitchens in the Coffin House in Newbury, MA when it was updated in the 1760s. Source: “America’s Kitchens by Nancy Carlisle & Melinda Talbot Nasardinov, Historic New England, 2008.

What were the topics of conversation during meal-times? The birth of a child? The death of a loved one? A marriage? Farming activities? The Akin family enterprises on the harbor? Taxes imposed by the Crown? Local politics? Dartmouth Monthly Meeting of the Society of Friends? Not much different than today’s kitchen table banter––from the significant, stressful to the ordinary.

It’s impossible to discuss the domestic side of the Akin family without mentioning their status as entrepreneurs, maritime traders, and presumably loyal British subjects.  At the time the Akin House was built in 1762 by Job Mosher (b. 1737-d. before 1804) for his new wife, Amie Akin Mosher (1738-1804), the nearby village on the coastline was anything but dull.

Let’s put into context the evolving societal norms and the political upheaval of the times by examining life in mid-18th century Dartmouth up to the early 1800s through the lens of the Akin family, Quakers and slave-owners. It is not known to what extent they owned slaves but the old records indicate they did. 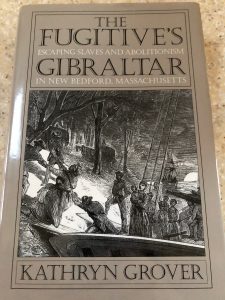 The Fugitive’s Gibraltar, Escaping Slaves and Abolitionism in New Bedford, Massachusetts by Kathryn Grover, [2001; LC 00-048878; ISBN 1-55849-271-2], stands out as one of the most significant treatises of New Bedford history. Cover to cover, it is a page-turner.  Once read all the way through, it becomes an invaluable reference. While the Akins do not feature prominently in her book, the reference to the Dartmouth Akins as slave-holders among other colonists such as the Russells and the Howlands is well-documented.

“… In that year [1754], 174 nonwhite persons lived in Dartmouth, Westport, and New Bedford. By 1800 the number of people of color in these towns was 405, an increase of 132 percent that brought their share of the population to 4.3 percent. These towns contained good farmland, but the growth in the economy was almost entirely due to maritime trade and whaling.  The  increase in the population of color is surely related to that maritime economy.”

Unquestionably, the Akins figure into this history given their vast holdings and prominence in what is now known as Padanaram Harbor, then referred to as Akins’ Wharf or Akins’ Landing, a measure of their influence and prominent role in the maritime economy.

Ms. Grover goes on, “[William] Wall identified the man of color in Birth of the Whaling Industry as having, like Venture Smith, come from Guinea, and he suggested a series of names typical among New England slaves and black servants––Pero, Quash, Pompey.  Whether Wall knew it or not, Joseph Russell in fact owned slaves named Quash and Pero at the time; they were probably among the thirty-seven males of color living in Dartmouth in 1765. Russell, born in Dartmouth, was accepted into the Dartmouth Monthly Meeting of the Society of Friends in April 1766, though he may have ‘followed the Meeting’––attended its services and observed its customs of dress and address––before being formally admitted as a member. Six years after his acceptance, however, the meeting disciplined him and Isaac Howland II, also a slave owner, for ‘running goods,’ presumably military, intoxicating, or illegally acquired ones.  Isaac Howland had run afoul of the meeting often in the past. In 1764 the meeting sent members to visit him both for marrying a non-Quaker and for being ‘in the practice of the slave trade,’ and it found the paper he submitted ‘signifying the sorrow’ for both offenses insufficiently apologetic until September 1765. Three months later the meeting permitted Howland to move to Rhode Island, where he learned spermaceti manufacture, and he then returned to New Bedford.  Only a month after he and Russell were reported for running goods, the meeting declared both, with Rebecca Slocum, ‘offenders…by their keeping their Negroes in bondage when they are fit for freedom after they have been repeatedly admonished to comply with ye order of friends.’  By January 1774 Russell still refused to accede to the meeting’s wishes, but by September the visiting committee finally persuaded him to free his two ‘negro men,’ Quash and Pero.  In April of the same year Isaac Howland freed his slave Pero.  Howland has long been reputed to have been the last person in Dartmouth to free a slave when he manumitted Primus in January 1777, but John Akin still owned an Indian named Hazzard, whom he freed the next month. …[footnote 13]”

John Akin (1745-1801) was Elihu Akin’s son (1720-1794) by his first wife Ruth Perry Akin (1729-1790).  In her book, Ms. Grover does not mention by name the other Akins as slave-holders and whether or not the Akins apart from John were Quakers in good standing. Therefore, it is not known if they had already acceded to the meeting’s wishes to free their slaves by that time.

The fact that Ms. Grover references John Akin briefly in the above excerpt and in the accompanying citation from her notes of Chapter 2, Origins implies or corroborates that the Akins were no different from the other colonists who were slave-holders for a time. During those times, Quaker religious beliefs by the many enlightened persuaded some of their less ardent “members” to free their slaves in the Dartmouth community well before the rest of America.

About 19 months after John Akin freed Hazzard, all hell would break loose for the Akins.

The Akins, who had switched loyalties from the Crown to embrace the American cause for independence––arguably driven by the economics of entrepreneurship and free trade principles––wasted little time eradicating Loyalists by running them out of their little harbor side community.

In September of 1778, soon after attacking Bedford Village [later known as New Bedford], the British were led to Akins’ Wharf  [now Padanaram] by these Tories in what was surely an act revenge by Tupper & company.

Quite a bit is known about the role of the Akins and other founders during the War of Independence when the Akin men joined the Sons of Liberty. The History of New Bedford and Its Vicinity (1602-1892) by Leonard Bolles Ellis, published in 1892, is an invaluable resource.

We set aside the Revolution for the moment, to reflect on the role of the Akins and the conflicts arising from slave ownership contemporaneous to the period when our 1762 Akin House was built and during the ill-fated British invasion.

In the near future, this website will contain narratives about the Akins and the Revolution as we approach the 250th Anniversary in 2026. The Akin House is a “witness house” to the activities leading up to and including 1776.  DHPT, as a sponsor, plans to host events to celebrate this important milestone in our nation’s history.

2 thoughts on “A Short History of the Akins, Quakers and Slavery in Old Dartmouth”